This week’s press release feels something like the adage, ‘you wait ages for a bus, then two come along at once’ – except when talking about this week’s racing, after many quiet months, it’s far more than two at once!

The red & white hoops were out in force & in fine form – with both old ‘hands’ & new recruits making short work of tough courses. This week also saw relative newcomers to the sport getting the first or second taste of lung-busting hill & bog-tastic fell racing.

Tuesday, 6th July saw the return of local favourite Todmorden Harrier’s ‘Bridestones’. This 7.5km/4.7-mile race may be short, but starts with a punch, as much of its 375m (1230ft) of ascent is at the front-end of the race. The initial climb can seem never-ending, but once racers scale it, they are rewarded with the close-ups of the beautiful and mystical Bridestones from which the race takes its name.

This year, the race started in beautiful sunshine, but in true Yorkshire form, that didn’t last! During the event, the heavens quite literally opened. Runners did well to just keep going & find their way in what became a storm of almost biblical proportions.

As this year’s event clashed with the fifth week of the CVFR’s popular post-lockdown ‘back to the fells’/get into fell running sessions, only a few club members were amongst the 57 to cross the finishing line.  The first red- white striped runner home was Ambi Swindells, who finished the route in a shave over 50 minutes.

Reflecting on the race, Swindells commented how it felt like the original climb ‘didn’t let up much at all’. She was frustrated to ‘have taken both a tumble and a wrong turn’ but pleased she could subsequently dig deep and put her ‘foot down on the descent’, ‘battling through the gorse’ to come in second lady – less than a minute behind first-placed Todmorden Harrier’s Rebecca Patrick. 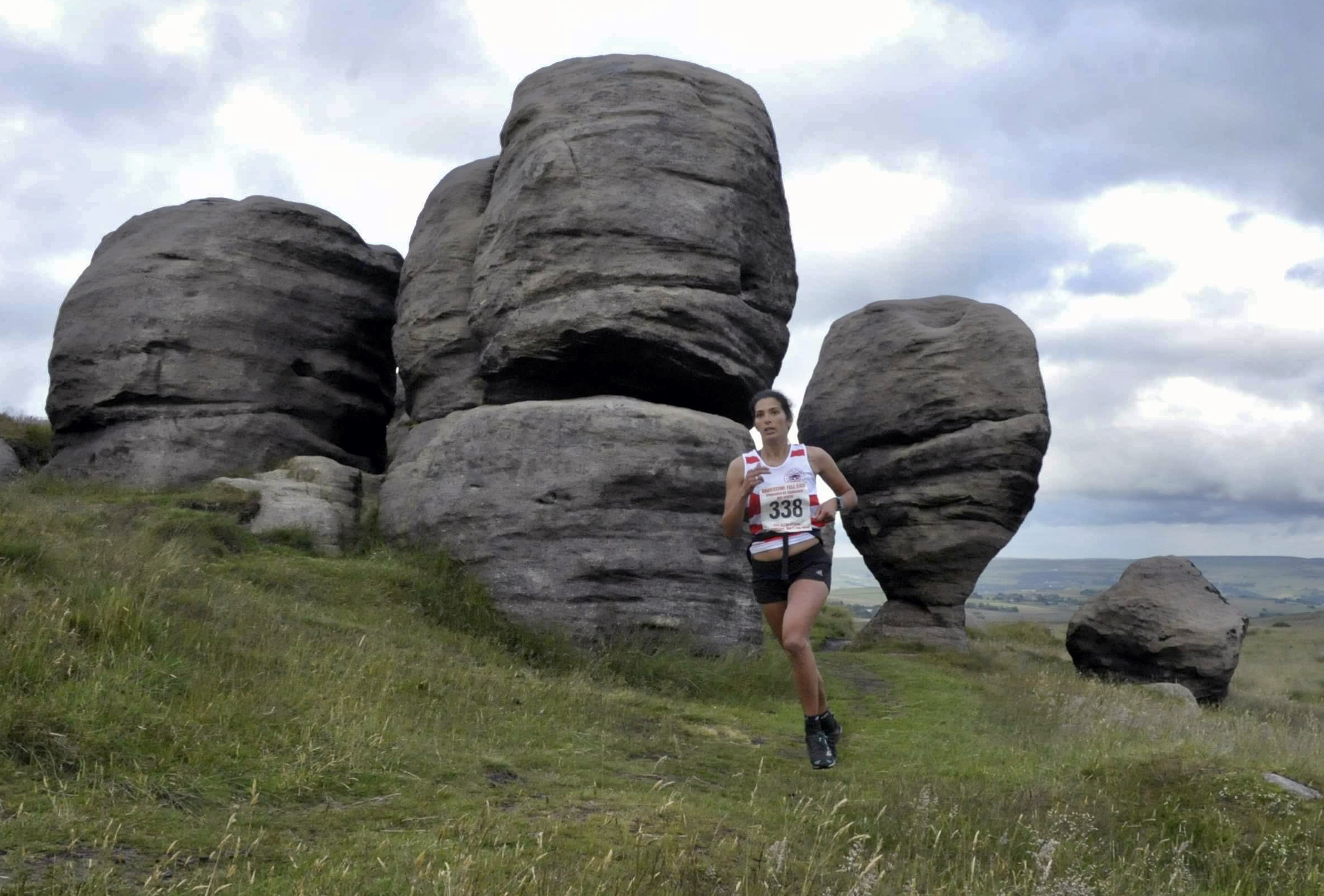 Ambi cruising past “The Rocks” – photo courtesy of Mick Fryer 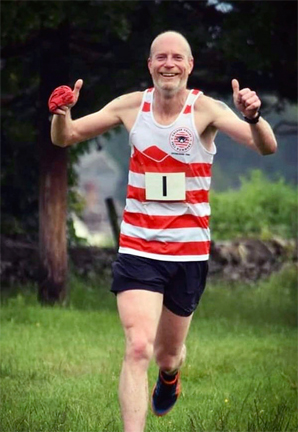 This was Williams first event in the new Calder Valley racing vest, which he jokes ‘has more peaks on it’ than his home county. Despite ‘a thorough soaking’, Williams found the race ‘great fun’ and ran as strongly as ever – finishing 5th overall in 33 minutes 50 seconds. This impressive feat saw him not only secure the first-place veteran runner spot, but also third-placed county senior in the first county championship of the year.

Elsewhere, on Saturday, 10th July, the senior red and white hoops made their presence felt at the Heights Ultra – a four-race trail running event with distances to suit every kind of runner.

In the longest distance, a punishing 50-miler, complete with 1834m ascent, taking in both Colne and Holme Valleys, CVFR’s Kevin Hoult ran extremely well in some extremely dank & damp conditions, to cross the line in just shy of 8h and 36 minutes, to finish third. For Hoult ‘the last twenty miles were just about getting to the finish’ and he was exceptionally grateful for the marshalls (especially at the third checkpoint), whom he credits for getting him moving again and ensuring he got over the line when he did. 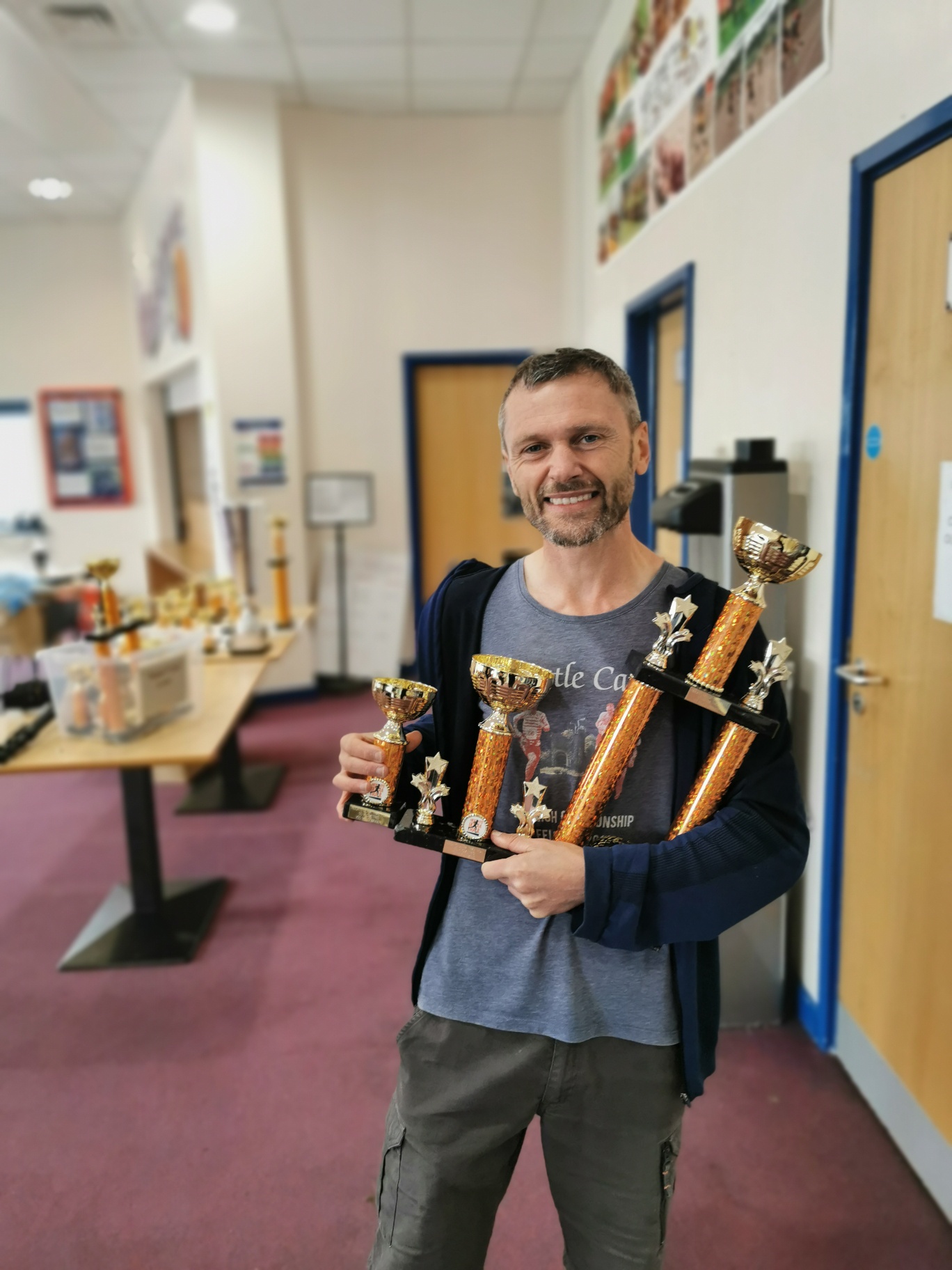 Gav’s trophy is nearly bigger than him!!! – Photo courtesy of Heights Ultra Trail

In the slightly shorter 50km race, Gavin Mulhound made the punishing route, with its eye-watering 1,000m of ascent look easy. He cruised the 31 mile run in 4h 7 minutes (averaging less than 8 minutes per mile and finishing nearly 14 minutes before his nearest competitor).

Mulhound was quick to praise the race organizer and his crew for an amazing first event and a ‘quality route’. To some extent, the appalling weather conditions may have played in his favour, as it felt more like a fell race ‘in the clagg, rain and very, very wet ground conditions’. However, Mulhouse regretted at times having set off at such a blistering pace. He was also surprised to have not strayed from the course or been held up by the bogs at Holme Moss that ‘swallowed competitors whole’. Mulhouse is convinced in better conditions a sub-four-hour time would be possible, as he lost several minutes plucking up the courage to ‘dive’ into a stream that had turned into a ‘torrent’. He found the last part of the course pretty ‘grim going’, not least as he had a badly bleeding foot, by this point. He was thankful for the moral support received from friends & the coffee at the end.

CVFR’s Darren Earnshaw also ran well in the 50km race, despite the horrific weather. He finished 16th in the MV40 category in 6h14:16. In the 10km ‘fun run’ for charity, one of CVFR’s newest runners, Joe Nerini ran strongly to finish 9th in the men’s open category, finishing the course in sub-50 minutes, in spite of the challenging meteorological conditions. 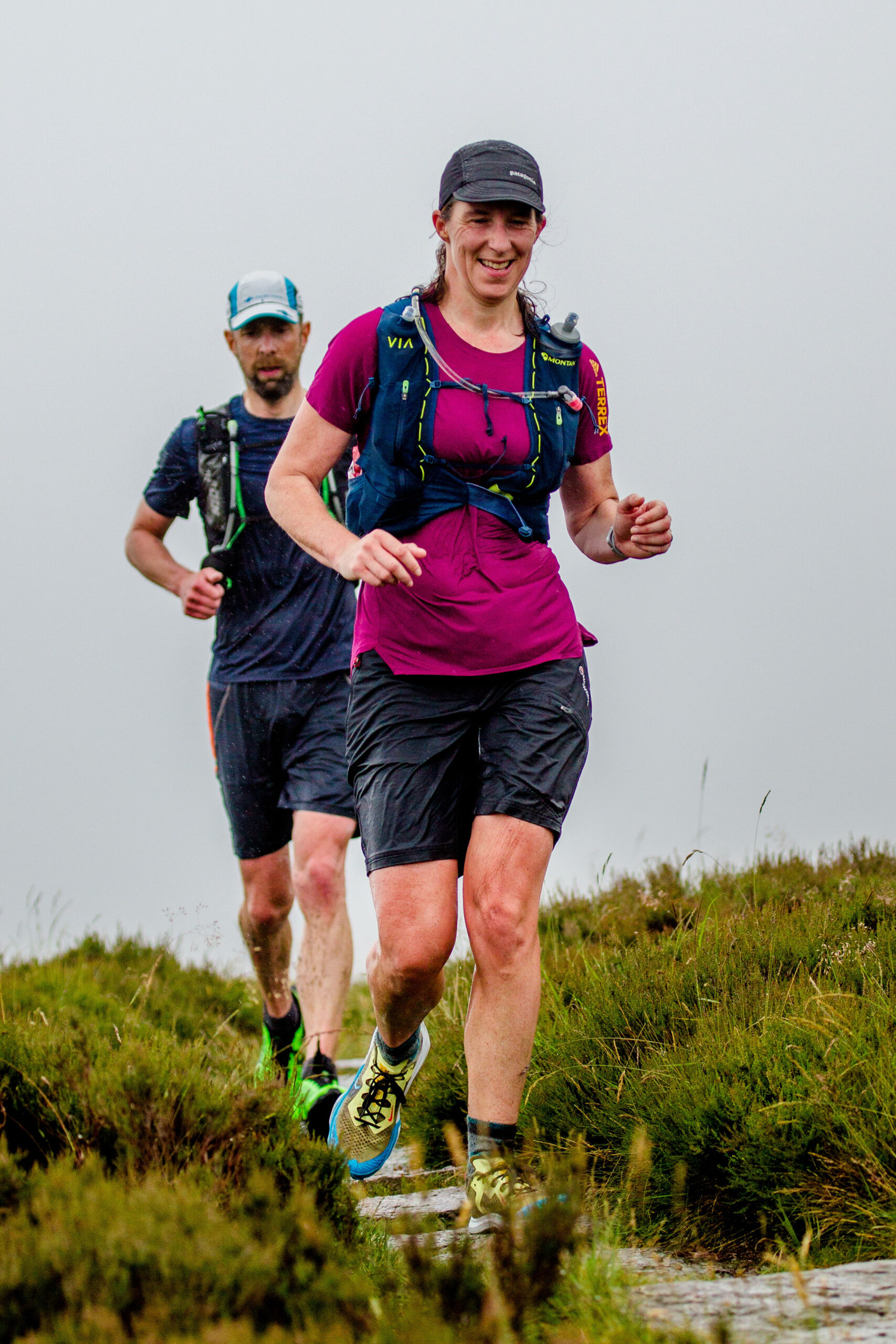 In the women’s races, one of CVFR’s newer recruits, Emily Ledder also ran amazingly well to finish the 50km course in brutal weather in an amazing 6h 11 minutes & 39 seconds. This was a big step-up distance-wise for Ledder, as her longest race since 2017. With visibility nearly zero at times, she was pleased at how it went, notably having managed to only take ‘one tumble between Black Hill and the Isle of Skye’ , despite the ‘awful conditions’. Ledder was delighted to finish second female, although she admits feeling her lack of distance training over the past year. She is already looking forward to coming back even stronger next year. 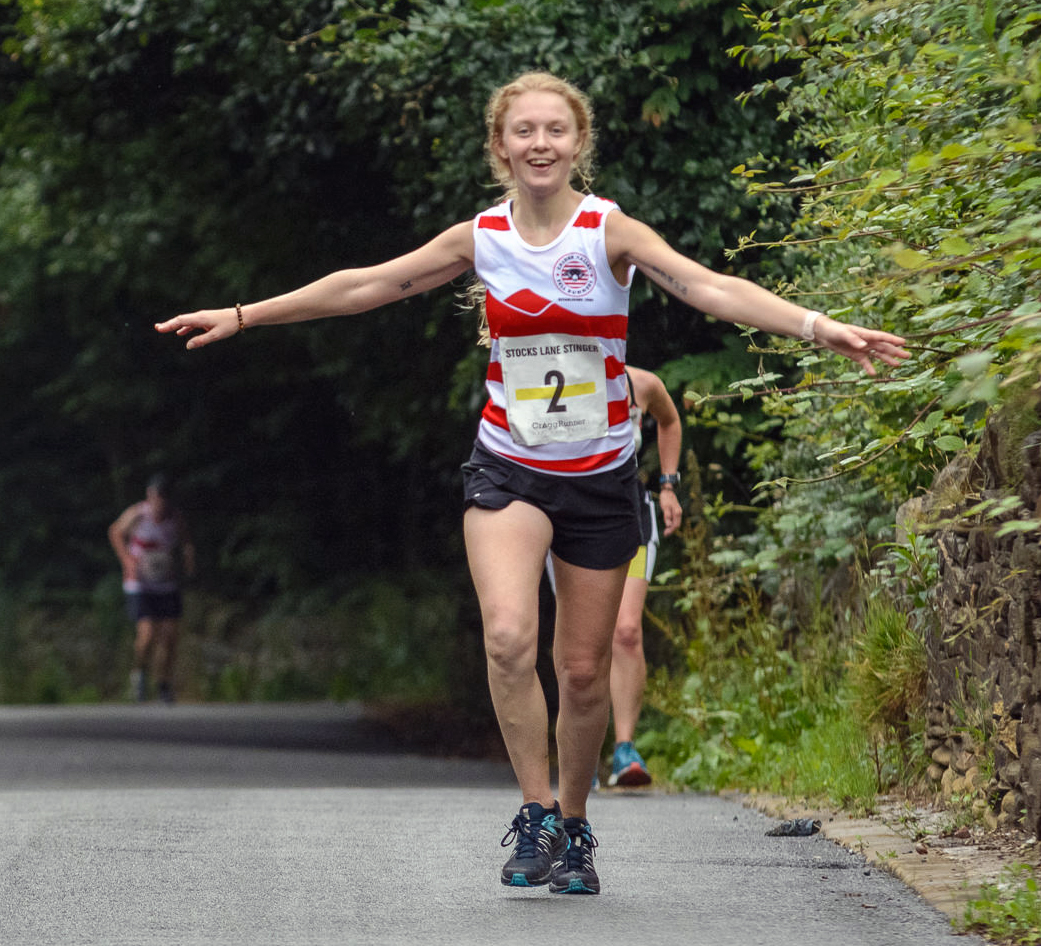 On Sunday, 11th July, it was the turn of the infamous local race, ‘The Stock’s Lane Stinger’ – a 10km road/trail race. This route is part of local runners’ ‘lore’ with its final 2Km truly deserving the label of a ‘sting in the tail’ that it is famed for, with an average 11.4% gradient (hitting a lung-busting 17.2% at one point).

Whilst both male & female course records are held by club members from previous years, it was the turn of the newer recruits to make their presence felt this year. Joe Nerini, Olivier Beaumont, Rebecca Alathoor & Keith Hutson – some wearing red & white stripes for the first time – all ran impressively. Nerini & Beaumont finished 4th & 6th in the open male category, in 54:48 & 58:14 respectively. Alathoor came in 7th in the open women’s race in 63:45 with Hutson just behind her on 64:38, a feat which saw him place second in the MV60 age category. Experienced fell runners Athony Costello and Andy Smith also ran well to finish 2nd in the MV55 category & 8th in the MV50 category.