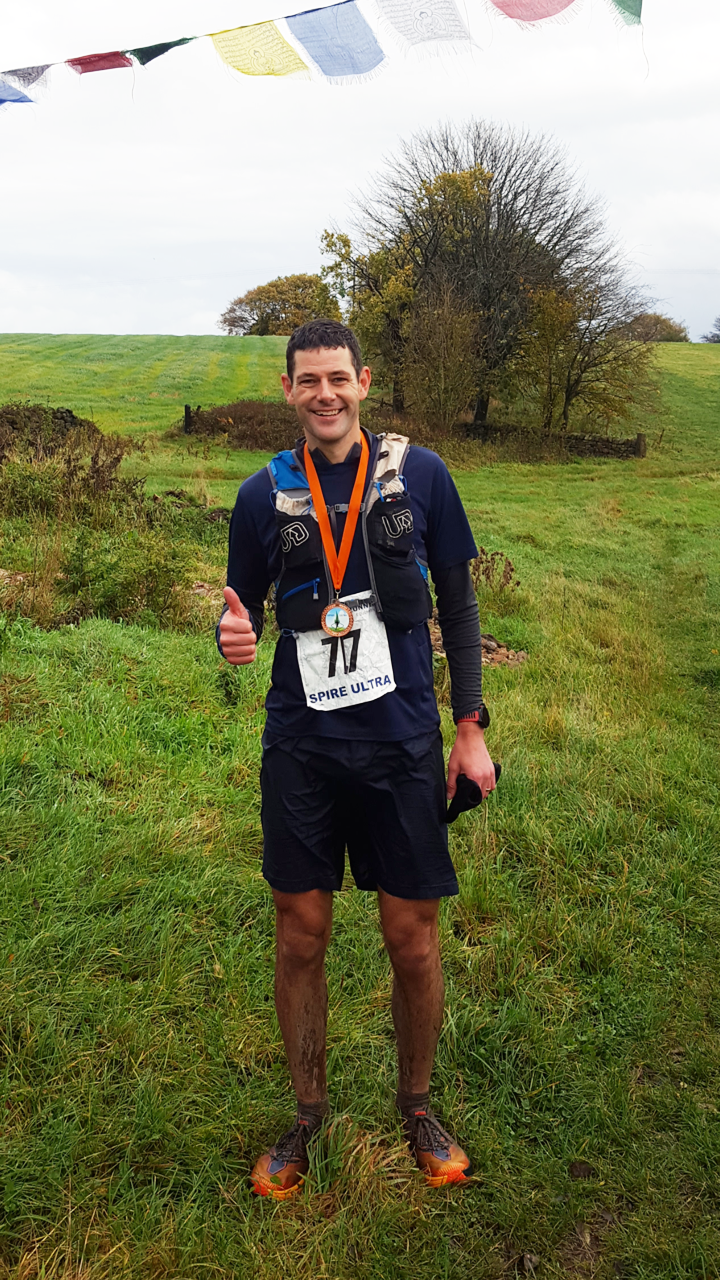 Whilst many competitive sporting events have had to be cancelled, some have managed to go ahead, including the rescheduled Spire Ultra – a 34-mile ‘Maypole’ run around the Chesterfield’s crooked spire. 63 solo runners and five relay teams braved last Saturday’s (31st October) wind, rain & mud to take part in this race, which had been significantly amended to take the pandemic into account (including marshalls in PPE, & runners setting off in socially distanced ‘pods’ based on their expected finish time).

Despite challenging weather, CVFR’s ultra-runner Kevin Hoult stormed to first place for the second year in a row – shaving six seconds off his previous personal best (although he was quick to point out that the route had been slightly shortened due to COVID restrictions). The red & white hooped runner described just how tough conditions were – whilst normally, competitors can see the famous spire in the distance for much of the race, this year, no such views were possible; with runners battling seriously stormy weather and epic mud to complete the course.

However, COVID restrictions were not all inconveniences, & Hoult reports how setting off in the final pod with the expected fastest runners meant a lovely atmosphere, as runners were able to go past & encourage one another along the route. He ran the first half of the race with last year’s second placed Greg Hopkinson & keen ultra-racer Ady Pendred – after Sam Anderson left the rest of the pod well behind at the start. However, as they reached the second half of the race, his fellow runners started to flag & Hoult saw his chance to catch up with Anderson. He not only did this five miles from the finish line, but after a navigation error at the end of the race saw Anderson drop to third place, Hoult took the win – crossing the line a staggering 10 minutes & 13 seconds ahead of second placed Pendred & nearly 15 minutes ahead of Anderson – to finish this grueling 55-km route in an astounding 4 hours 31 minutes & 31 seconds.

Hoult was quick to heap praise on race organisers, Jamie and Claire Glazebrook, as it was thanks to their hard work, diligence in risk assessment & jumping through the various hoops associated with respect for COVID restrictions that the rescheduled race was able to go ahead. Hoult commented how ‘great’ it was ‘to get back to racing’ after a seven-month enforced break, & how the first place finish was very much a ‘pleasant surprise’. All profits from the race were donated to High Ashes Rural Project (HARP) http://www.highashes.org.uk/

With this weekend’s lockdown news, racing will be suspended for at least the next month, but runners look forward to May 2021 & the next ultra in the series. 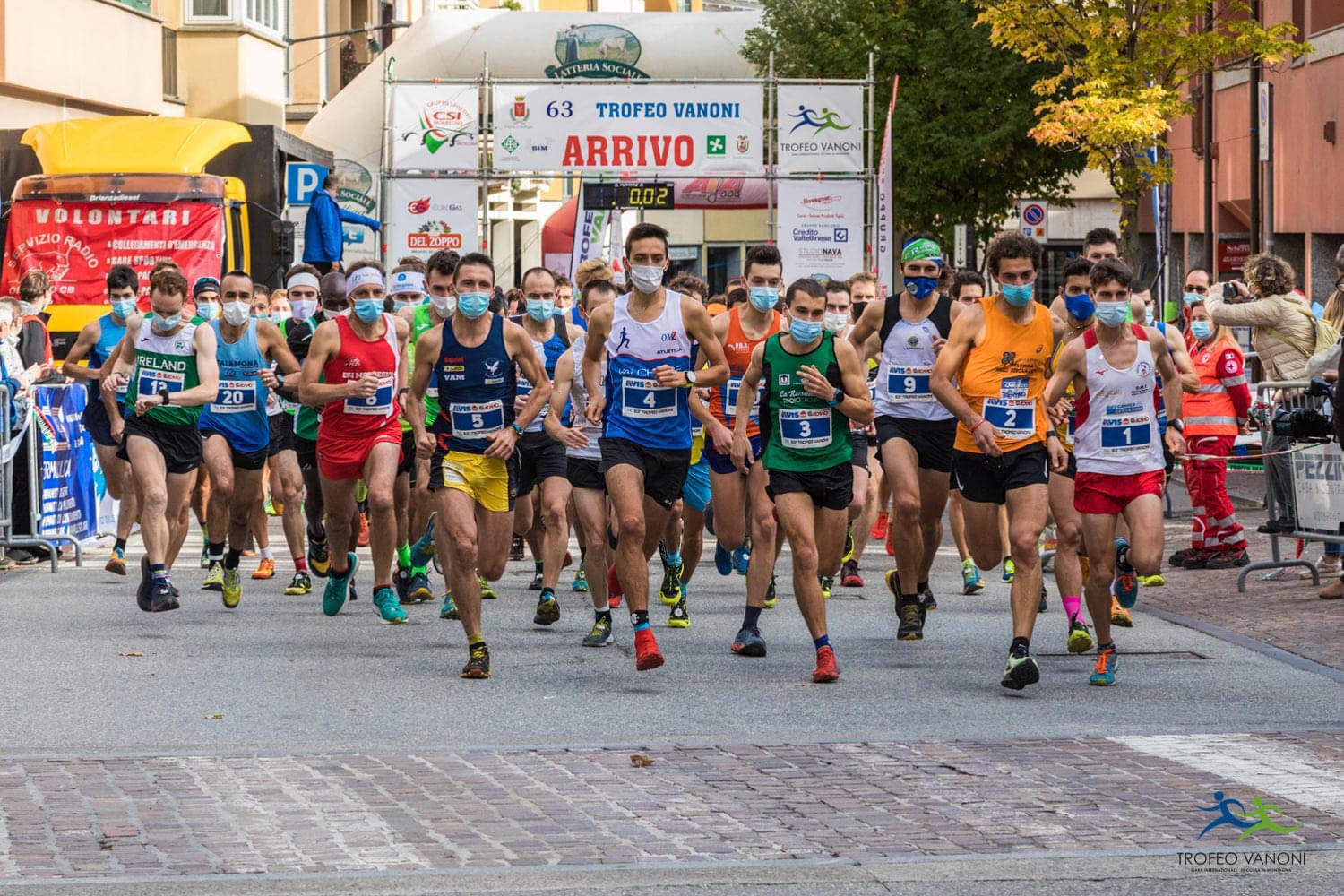 A “masked” start to the relay

Calder Valley’s Ben Mounsey jumped at the unplanned opportunity to compete in one of his all-time favourite races, the prestigious Trofeo Vanoni mountain running Relay. 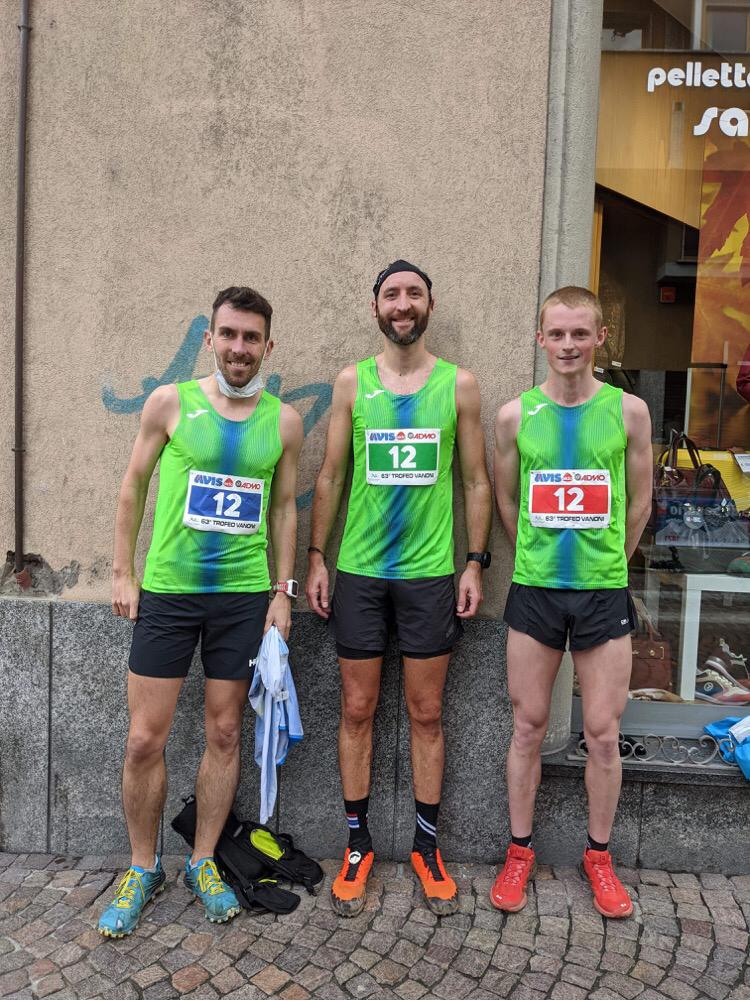 As part of the Great British team, Ben (centre of the photo) joined fellow athletes Andrew Douglas (SCO with Blue No 12) and Zak Hanna (NI with Red No. 12) in the beautiful Italian village of Morbegno for this international race. Each leg involves running a lap of 7k with over 400 metres of climb. The team finished an excellent 5th position overall, in a highly competitive field. France took first place, with the top Italian teams taking second and third. 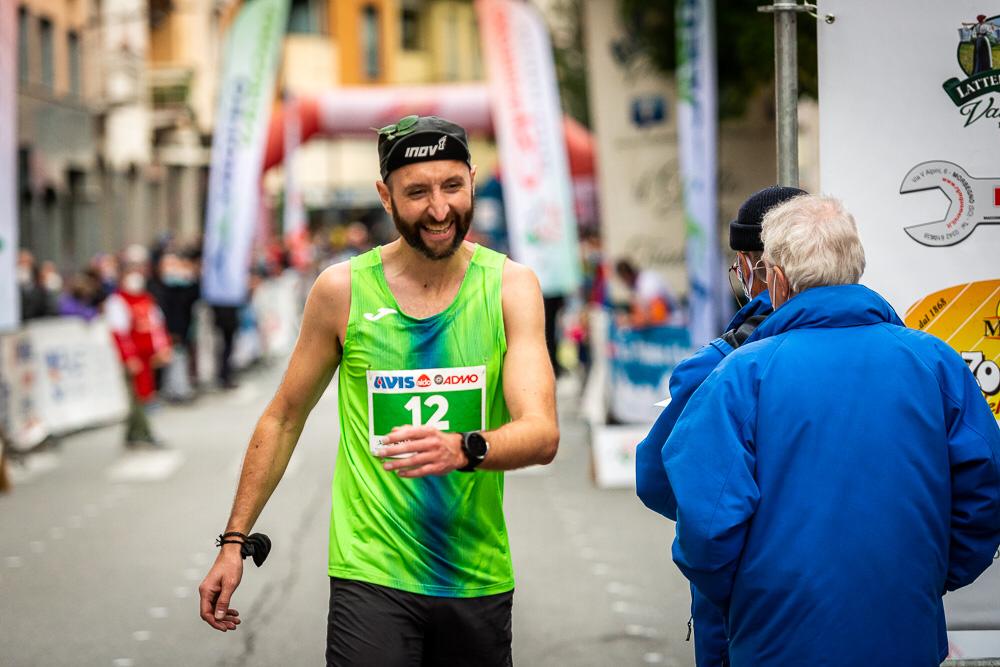 Ben says: “It was great to be back racing, but it was definitely a shock to the system after so many months of absence. Zak and Andy both had outstanding performances and I was really pleased that I could hang on to fifth place on the last leg ahead of Slovenia.” Time for a well deserved Spritz.

A sport with a difference – Ben on ‘plogging’:

Another of CVFR’s international runners is also making the most of the current situation – in Ben Mounsey’s case to shine a light on the growing problem of littering on the fells and mountains, and encourage others to do something about it. Ben, who is sponsored by Sportshoes, has written a blog on the Sportswear company’s website to raise awareness of the revolutionary movement of ‘Plogging’ – a combination of jogging, whilst picking up litter along the way – which is beginning to gather pace and momentum internationally.

Founded by leading activist Erik Ahlström, plogging derives its name from two Swedish verbs – plocka upp (pick up) and jogga (jog) and offers a much-needed response to growing concerns globally about increasing amounts of discarded waste, littering and a rise in plastic pollution. People’s poor treatment of nature has come to the fore during lockdown with local and national news outlets decrying the spoiling of sites of natural beauty with discarded rubbish.

Aside the positives for the hills and their flora and fauna, this movement offers those who practise it a number of benefits linked to health, fitness and mental well-being, including extra incentive to go out into the great outdoors, added feel-good factor of being part of something positive and doing good, but also. more range of movement and increased flexibility (stretching, bending, leaning and twisting) plus an increasingly heavy bag to work on cardio, burn more calories, and build core strength. To find out more about plogging and how you can get involved, visit Ben’s blog: https://www.sportsshoes.com/running-hub/motivation/plogging/?fbclid=IwAR397nNubHynrvEpJRDXIKasA-H8DzewQwhQV2eUs7hhPbZSxdHKYlAJ0po 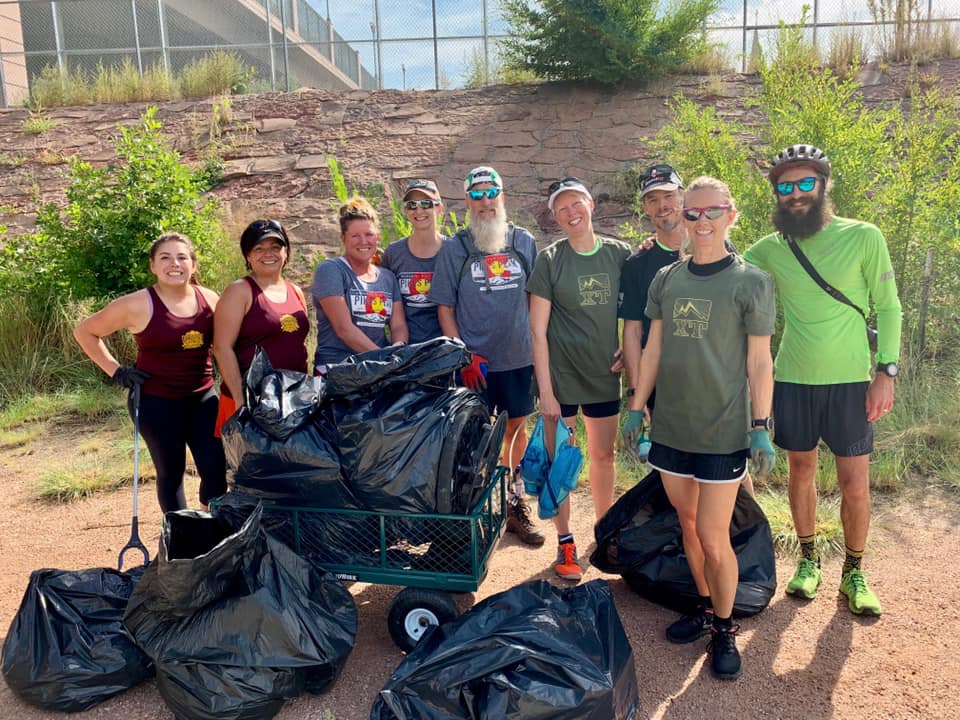 America, CVFR runner and inspirational athlete, Peter Maksimow (in the green top), on one of his local plogging events

Staying on track – Marc’s one-minute mental health video on the benefits of running:

Finally, CVFR’s veteran fellrunner Marc Collett, who has recently fought hard to return to the sport after a period of sustained serious injury, was keen to encourage others to also gain from the benefits of getting out and being active in the nature around us. For mental health day, Marc worked with Sam, at Curious Motion in HX – who has launched a fabulous gallery of one-minute motions as part of Calderdale’s very own gallery of mindful videos – to produce a short video on running entitled ‘on track’.

The full range of inspirational videos can be viewed at: http://www.curiousmotion.org.uk/omm-gallery/?fbclid=IwAR3VMEil9Rq07RQNCneRKPyialjMYtYa7V5LXPxgkGdl-TnpVyneRctSgE4 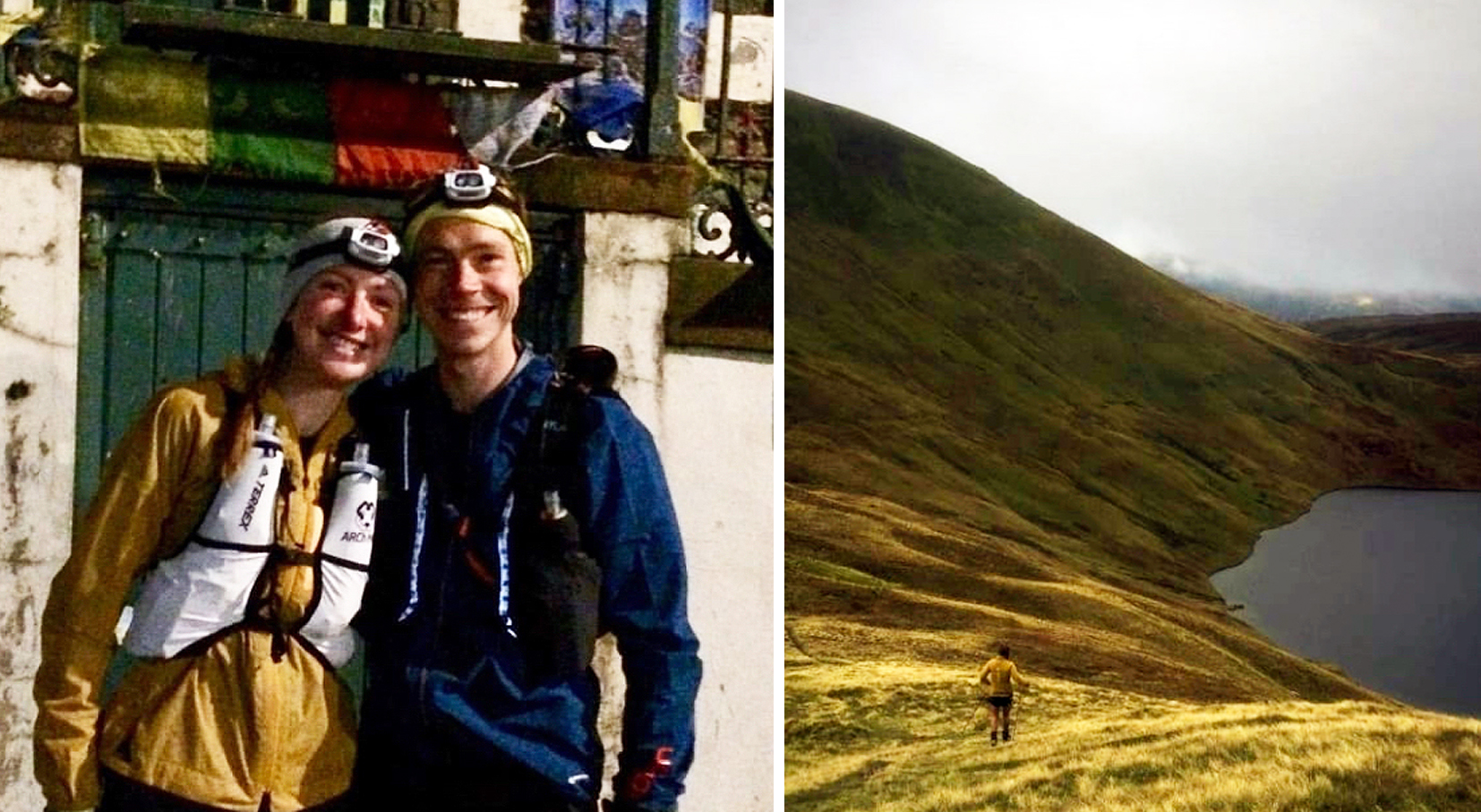 International trail runner Holly Page decided, despite various small injuries and niggles, to scratch a long-term itch and attempt the infamous Bob Graham Round. Not for the faint of heart, the BGR – as it is affectionally known in the running community – is a challenge in the Lake District, starting and finishing at Keswick Moot Hall, and taking in a staggering 42 fells, 66 miles/106km and an eye-watering 26,900ft/8,200m of climb along the way. Runners have 24 hours to attempt the route and normally organise a team of pacers to keep them on target, carry kit and help with navigation.

However, as Holly was unsure physically that she was up to it, she didn’t want to ask other people to give up of their time. Consequently, and rather unusually, she set off on with just Tom Owens – the two of them carrying all the food and clothes they might need – with the mindset that it was simply “a lovely (albeit long!) day out in the mountains”. Holly recalls how navigating in the dark, and clambering over wet rocks at night in the pouring rain & thick mist was far from easy – even with a good headtorch visibility was often. down to less than two meters. As expected, Holly’s various injuries niggled; a further fall plus an incident with a barbed wire fence compounded these. But spurred on by the promise of her mother’s sticky toffee pudding and a desire to see if she could beat her father’s time on the same round, she gritted he teeth and kept going. 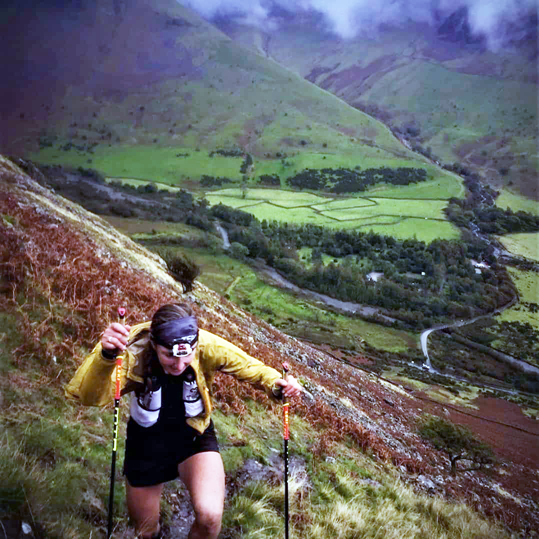 There were obviously ups and downs – both metaphorical and physical – but in the end, despite a badly swollen knee, Holly (and Tom) still found it enjoyable and were glad they had taken it on. In fact, they appreciated the little glimpses of the valley and the rays of sunshine/breaks in the rain all the more for the sub-optimal conditions: “it was all the more special and felt exciting to be just Tom and I on the hill battling the elements and munching sandwiches and sipping @activelifeenergy. Holly is loving comparing notes and photos with her Dad of his successful attempt many years previously (also wearing Adidas – and only an hour slower– despite his additional challenge of running in leggings), but is sensibly taking a week’s break from running, before seeing where her legs will take her next.