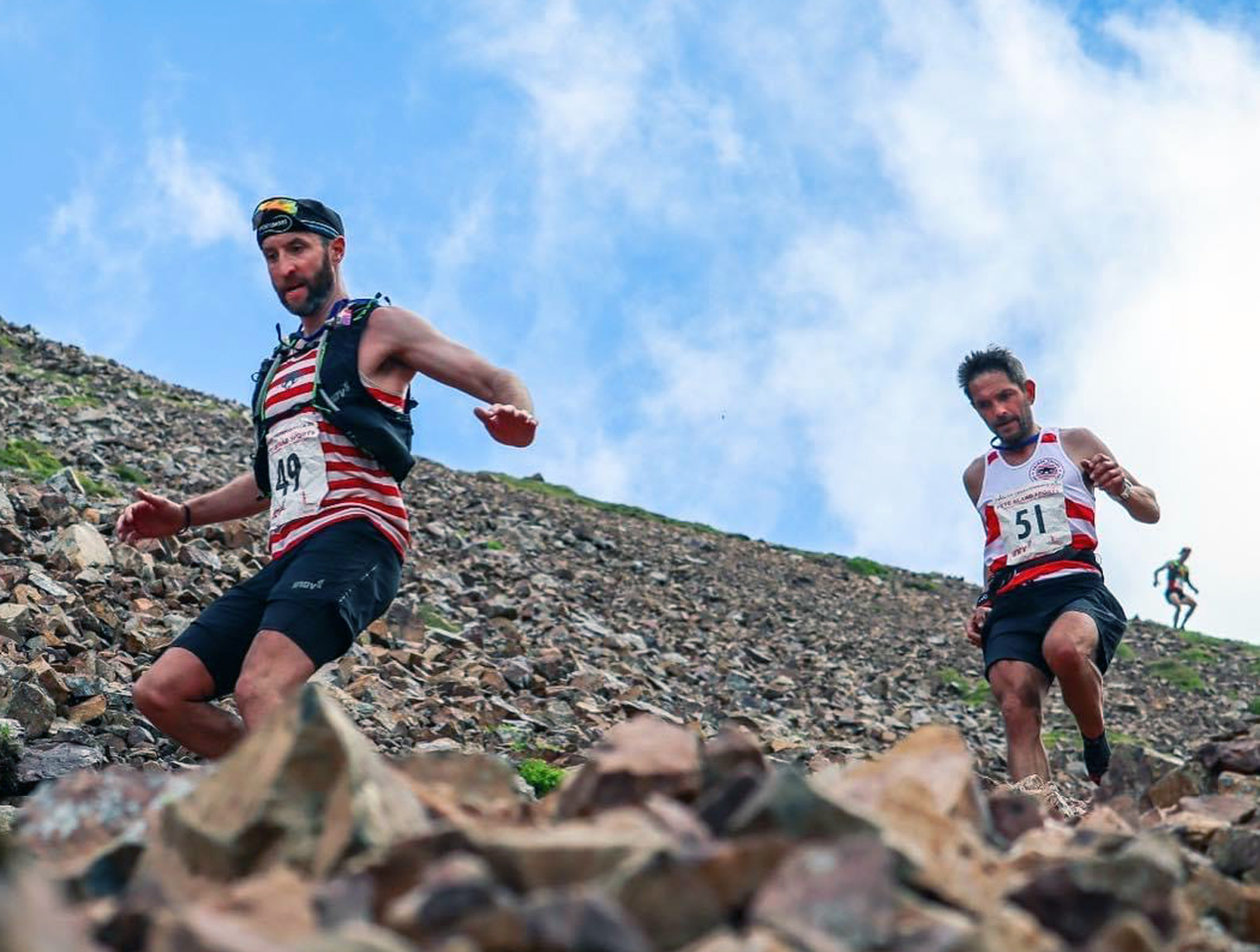 After missing a year of English Championship races, the country’s fell runners were raring to go at the Ennerdale Horseshoe last Saturday in the first Championship race of 2021.  It is not a light undertaking, covering 23 miles and 7500 feet of climbing.  Starting at the western end of Ennerdale, the route follows a circuit of the whole valley, taking in the hills of Great Bourne, Red Pike, skirting High Stile and Haystacks before climbing Green Gable and traversing under Great Gable crags.  The racers then face a climb of Kirk Fell, Pillar and Haycock before a prolonged downhill run taking in the tops of Iron Crag and Crag Hill.

Such was the effort amongst the team there wasn’t much talking from the normally larger than life Math Roberts at the finish line. He struggled with horrendous cramp but managed to hang on until the finish to help to score for the team.

Thanks to Cumberland Fellrunners for putting on a wonderful event. Sat there at prize giving with the sun beaming down, the camaraderie of fell runners and the legendary Joss Naylor giving out prizes, there was nowhere else anyone would rather be. It was great to be back. 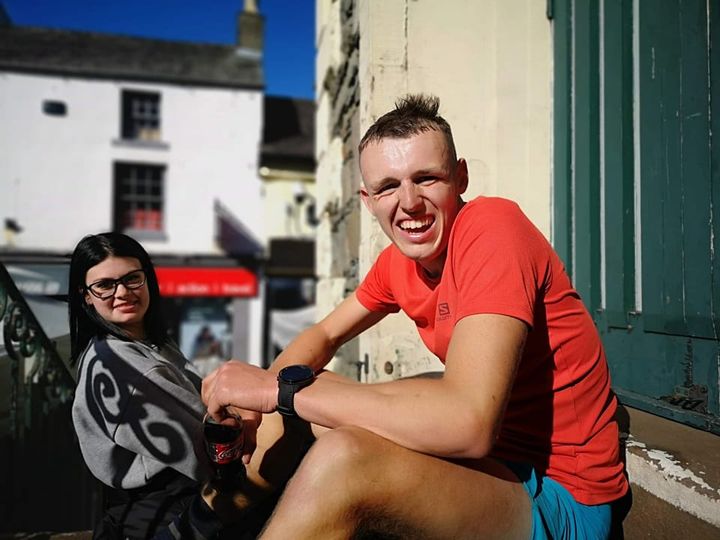 An amazing performance saw Charlie Parkinson finish his Bob Graham in 18h 58mins and in doing so become the first person under 20 to do a sub 20-hour round.  An epic route of 66 miles taking in 42 Lakeland peaks, the Bob Graham Round is a serious test of fell running ability.  He was ‘high-5ed’ by some of the Ennerdale racers as he came over Kirk Fell. Charlie absolutely obliterated the u20 record by 1h 8mins. 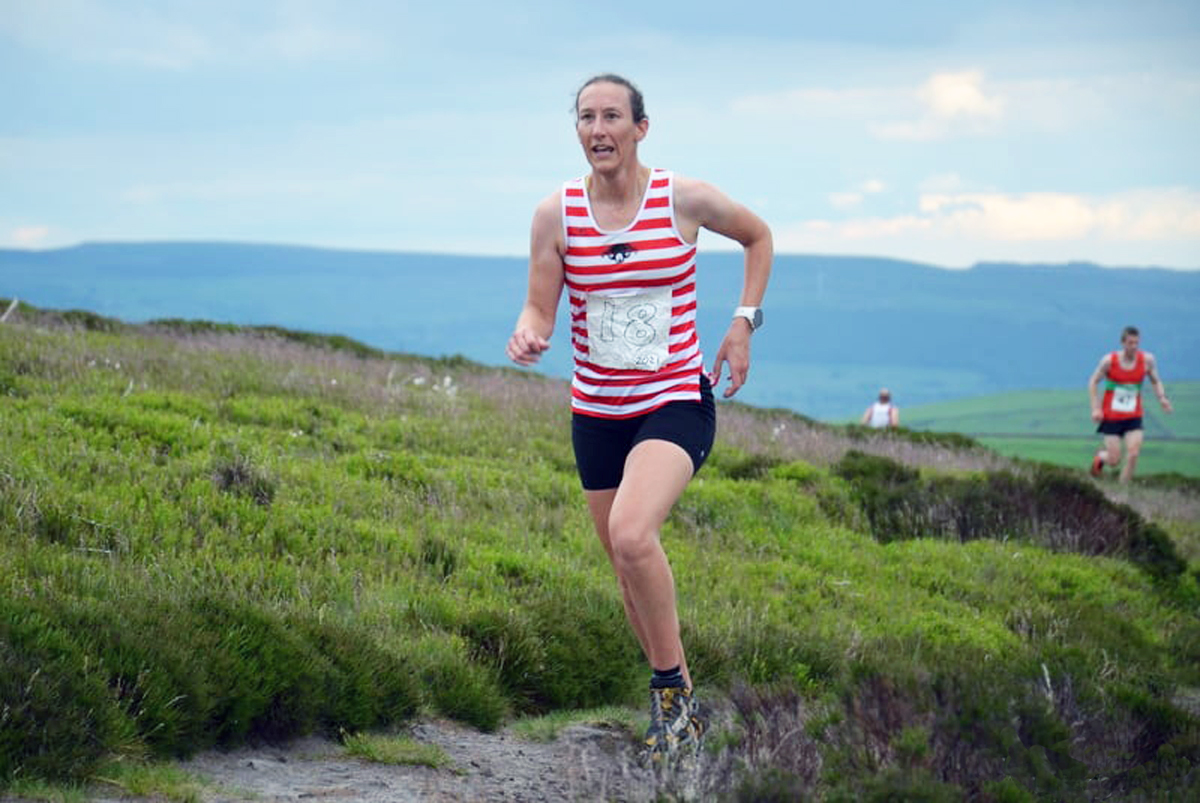 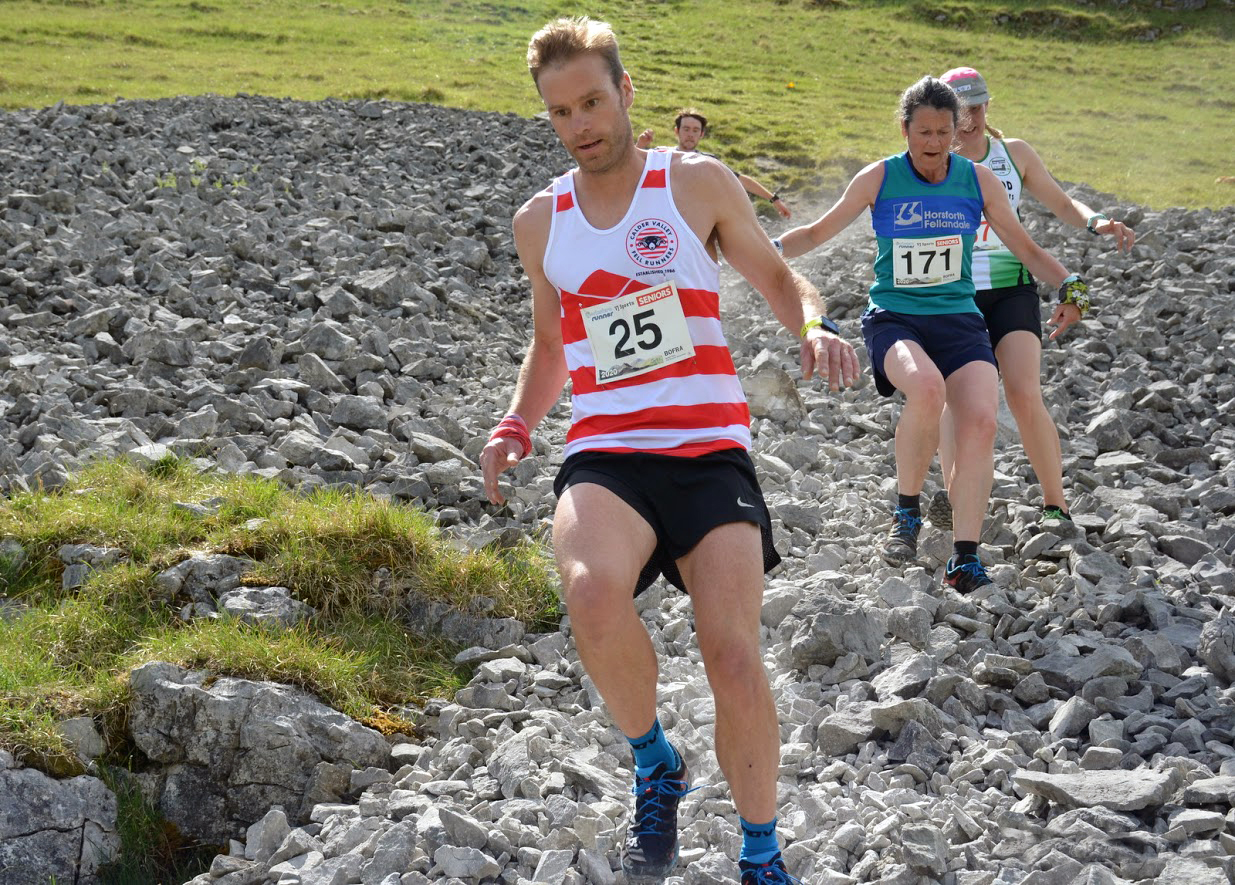 Another short fast race, the Kettlewell BOFRA race was held on the 6th June.  Run over the scarp to the west of Kettlewell in Wharfedale, a fast start is required to reach the gully which is usually a bottle neck before reaching the ridge. Then a short run along the skyline to the cairn before a fast descent and a short section of scree.  Calder Valley Fell Runners were well represented.  Alex Whittam improved on his 4th place at Coniston Gullies with a hard earned 3nd place, behind Ted Mason and 1st places Simon Bailey of Staffordshire. 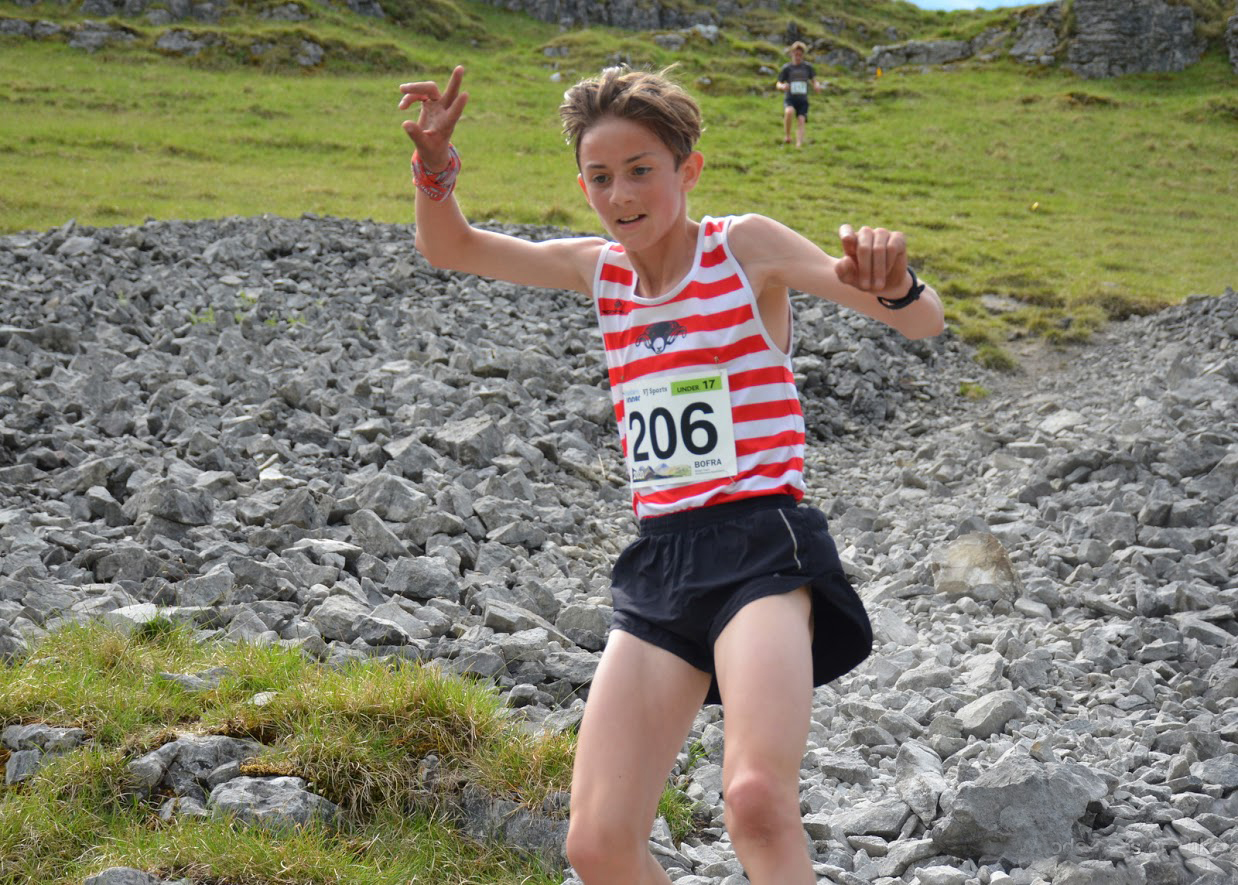 Charlie Pickens also came 3rd in the under 17s race in 13.47, he was shortly followed by Euan Logue in 6th place some 40 seconds behind.  James Aitken was 20th.  Ollie Pickens was 12th in the u14 race.

Holmfirth Harriers did a fantastic job of hosting one of the four English Junior Fell Championship races that will go ahead in 2021 with competitions at U9 level increasing in two-yearly increments up to U19s. Race distances go up by age category with U9s running over 800m increasing to 8.1km for the U19s.

Calder Valley has a burgeoning junior section and despite limitations of the current pandemic was represented at U9, U11, U13, U15 and U17 age categories

West Nab was a great start to the year for the CVFR Juniors with some fast times and great finish positions for many of the young runners. The weather was superb – hot but manageable – and the terrain on and around Marsden Moor was dry in general but rocky in places.

The junior races were staggered with boys setting off first and girls three minutes later. All races had a good steady climb on the track up to Nab, across fields and down into Clough. Older age groups with extended race distances crossed the river to end with a steep, tough climb. The online registration process, staggered starts and orderly departure away from the finish line made for a well organised, safe event that went very smoothly. 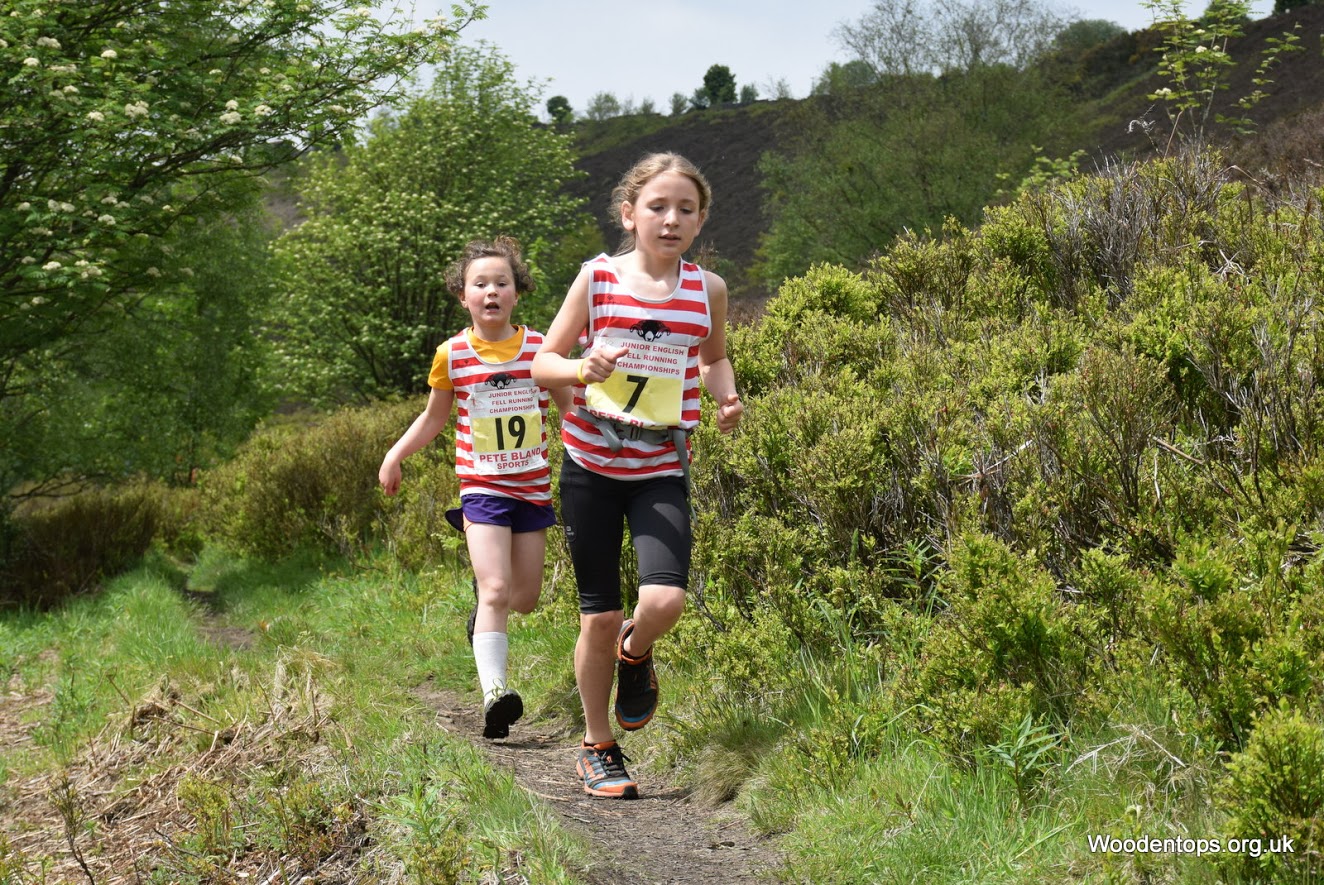 There were some exceptional results amongst the juniors with Ishbel Symington and Lottie Cliff coming in 3rd and 4th respectively in the U9s. Harry Cliff won the U11s boys race against a strong field and led pretty much from the start. Clara McKee had it all to do in the u13s girls race having to pick past the back markers in the boys wave to claim victory in her age category.

At U13 level, Joseph Stone, Leo Hackett and Ted Parker all had good runs and at U15 level, CVFR was represented by Olivia Falkingbridge, Charlie Pickens, Thomas McKee and Ollie Pickens. The club was well represented at U17 level by Tom Owen, Euan Logue and James Aitken. 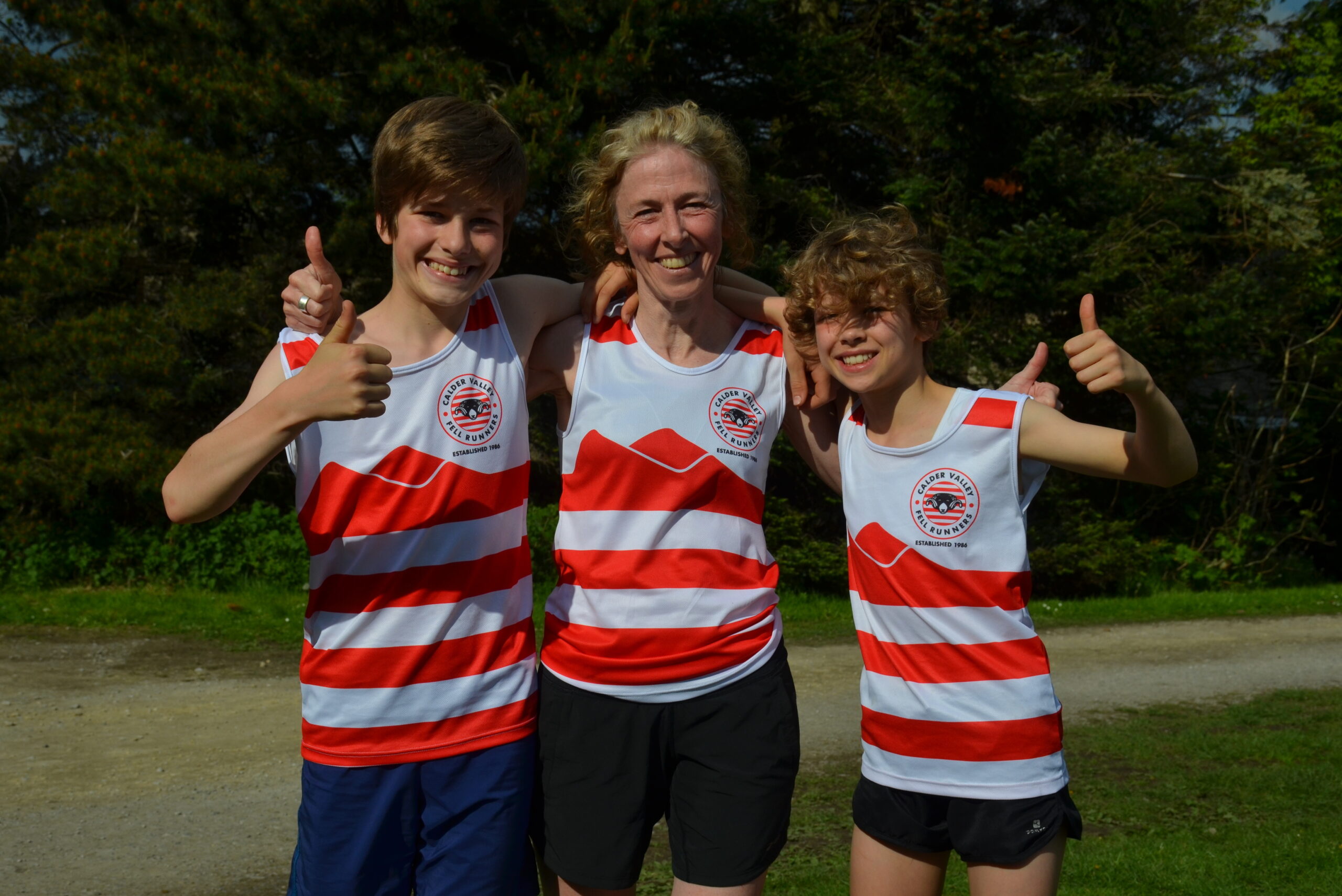 The Seniors were also in action on the day. James Logue came in overall 6th position with both Trudi Entwhistle and Helen Flage having good runs. 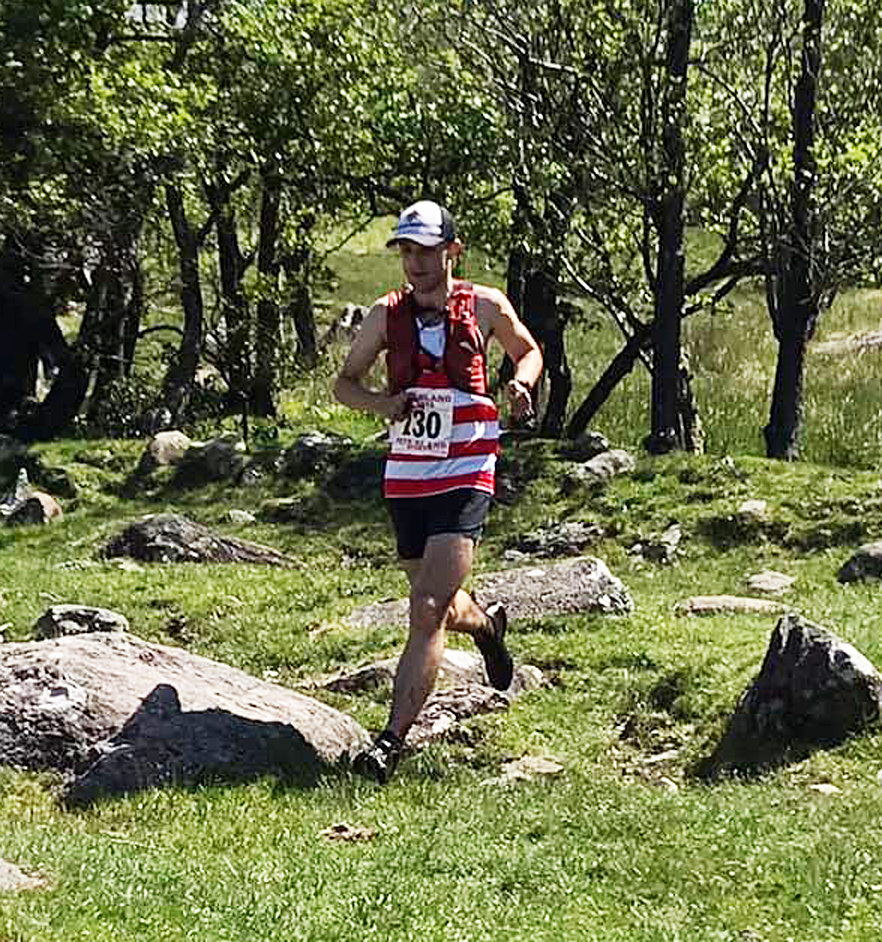 Martin on his way to winning

The entry notes for this classic 10-mile fell race with 3,000 ft of climbing assures potential runners that “the short race is not short”. This is a Category A fell race around the peaks at the head of the Duddon Valley in one of the most beautifully isolated places in the Lake District. No valley or fell is too isolated for Calder Valley Fell Runners who were not only represented at this year’s Short but provided the winner and second place on the podium with Martin Howard winning a terrific race on a blistering hot day and Darren Kay coming in a strong second. A great showing by the Calder valley club.

Kevin Hoult, arguably the best ultra runner in the club, showed his mettle again over the past week with an attempt on the Coast to Coast route covering 298 km between St Bees in the west and Robins Hood Bay on the east coast in an astonishing time of 49hrs 50mins taking in 8,170m of climbing on the route. Kevin had brilliant support along the way and managed to keep going with minimum stops. Despite the hot and windy conditions, he reached a point where a sub-50 hour run was achievable and he pushed on to come in with 10 minutes to spare.

Club member, Rebecca Alathoor, put in a brilliant Yorkshire Three Peaks (Y3P) run as a fundraiser for UNICEF and despite a navigation hiccup on Whernside, completed the challenge in 6hrs 8min covering 25.3 miles including 5,276ft of climbing. The Y3P takes in the three peaks of Pen-y-ghent, Ingleborough and Whernside in the Yorkshire Dales National Park. 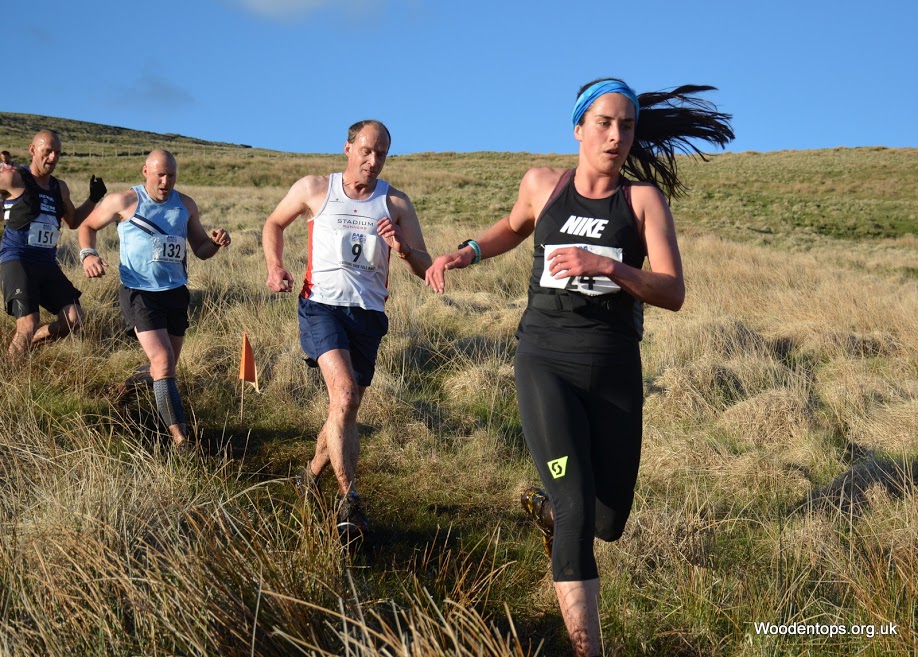 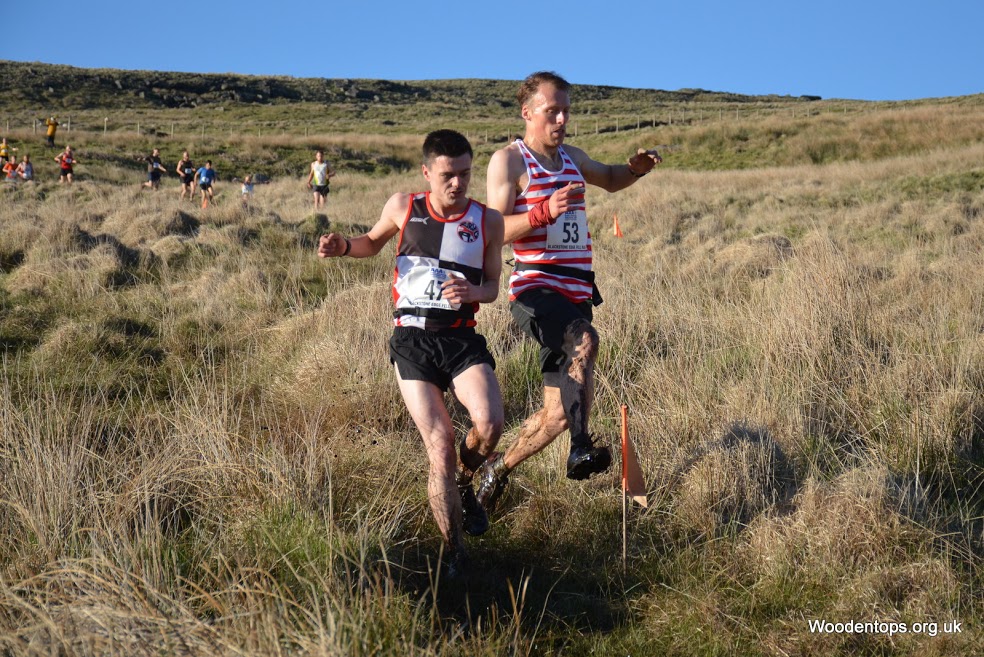 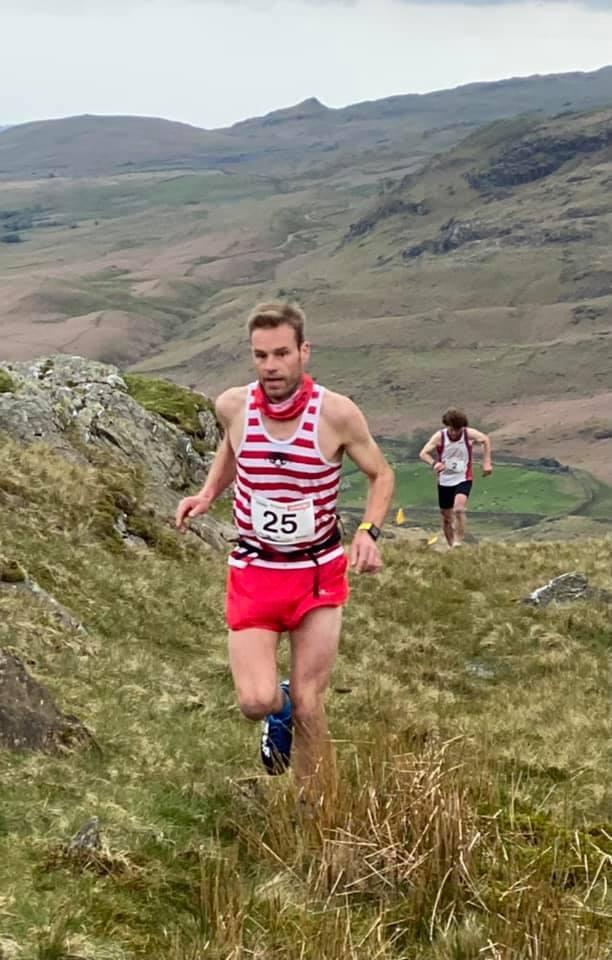 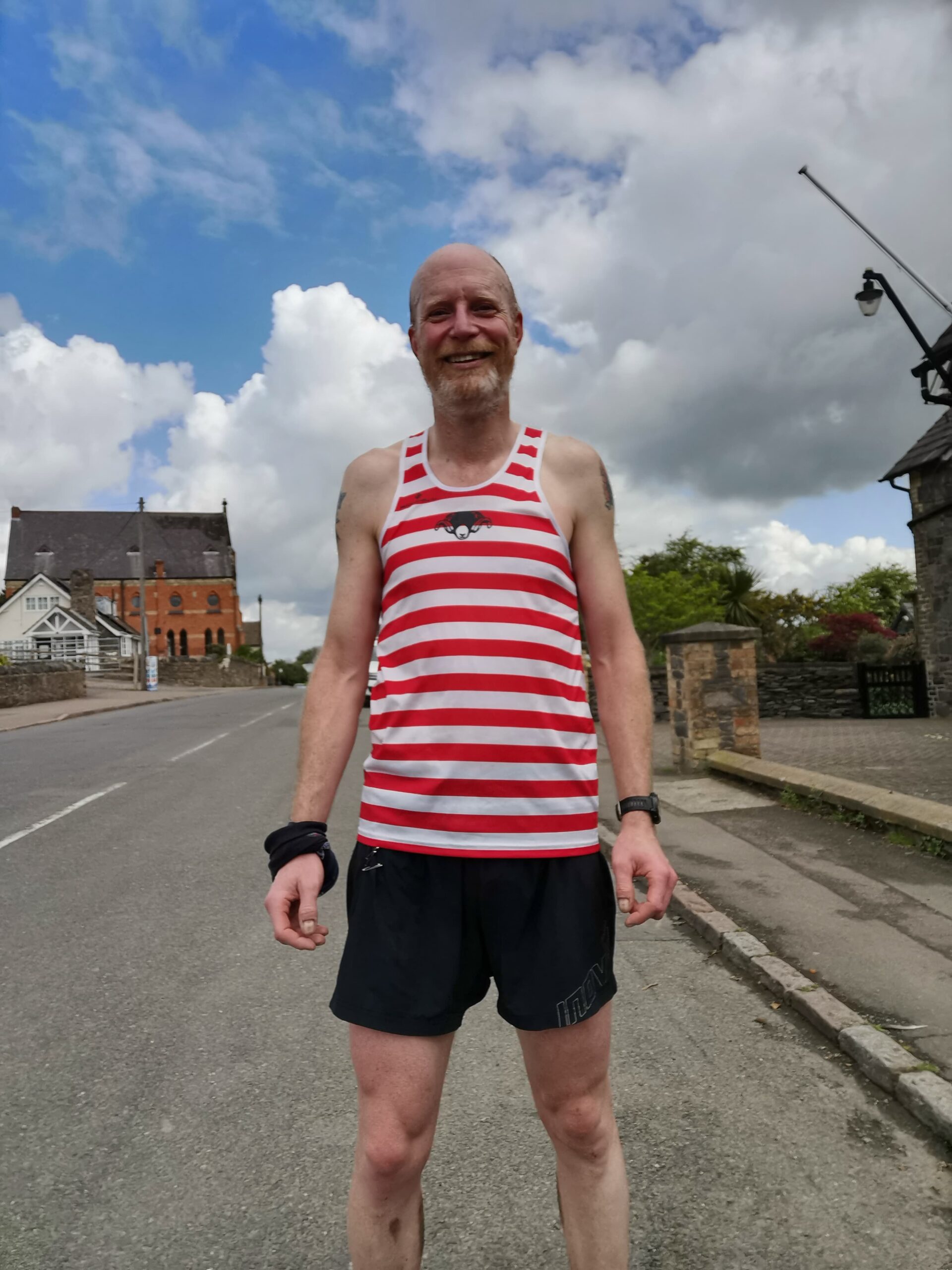