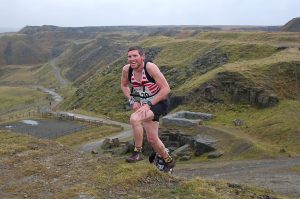 Iain Illstone climbing out of the quarry

It was a bumper turn out for CV at the classic Lee Mill relay in Rossendale on Sunday with CV representing almost 10% of the field. This popular fell relay is a firm favourite with many clubs, and has earned a reputation for excessive bogs, wintery conditions and great camaraderie over the years.  (CV’s international athlete Ben Mousey dubbed it his toughest race in 2015 following a near miss with hypothermia).   But fell runners are hardy folk and such talk merely inspires clubs to enter their teams of four runners, all of whom run individually over the 6 miles route. Eight of the 88 teams this year belonged to CV and, as with previous years, entered as ‘handicap’ teams, all competing against each other rather than other clubs, generating much inter-club rivalry and banter both on the day and in the weeks leading up to it. And the incentives for beasting their team mates is the post-race party, whereby the winners have free food and drink, courtesy of the slowest team.

Usually an all-male club tradition, this year saw many CV women joining the handicap teams also wanting to join the fun and frolics of bogs and beer. The clear winner of the CV cohort was Howard’s Heroes, captained by Martin Howard with fellow team mates Gloria Ayuso, Jon Underwood and Jonathan Moon. The team, finishing 32nd overall in a time of 04:12:18, were a good 5 minutes ahead of 2nd place Make life a banana (and negative split). Drinks were on SatNav Smithies who finished a good 23 minutes behind Howard’s Heroes. Said Gloria Ayuso, the first CV woman to be part of a winning Lee Mill handicap team:

‘Sunday in Lancashire was perfect racing conditions; plenty of bogs and mud which I loved. It was the best weather in the three years I’ve taken part; dry, no gales and no snow!!! It was my first encounter of this handicap malarkey. I was a bit nervous at first but it proved to be a fantastic day out. A fabulous team atmosphere where all were competing against each other whilst wanting everyone to do their best! All 8 CV teams were of mixed abilities so we had some of our elite athletes in the same team as our slower runners. And I got to experience what it felt like to be a winner! I’m still grinning now’

A clear contender for a mud monster prize was CV’s Paul Haigh who returned looking like he’d emerged from a swamp. Said Paul:

‘I stupidly followed the Keswick’s team advice of following the quarry fence at the end. I’d already fallen in 3 times trying to overtake Ben Cliff on the decent. But that was nothing compared to the quagmire at the end. Not even Grin n Bear it had bogs chest deep. I had to role about like a seal to get out!’ 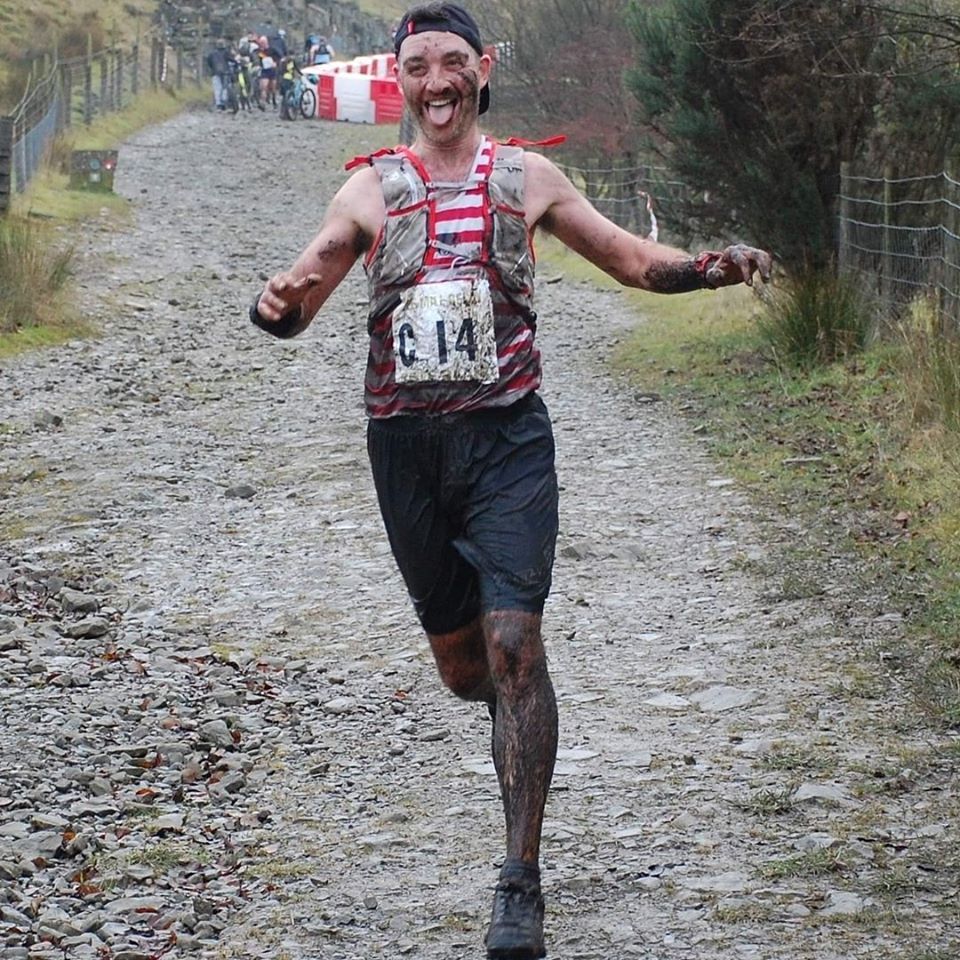 So while the 8 CV teams were battling it out amongst themselves, the Battrick Athletic team won the overall relay in 03:19:38. First ladies team was Ribble Valley Harriers in 04:01:53. Full results here 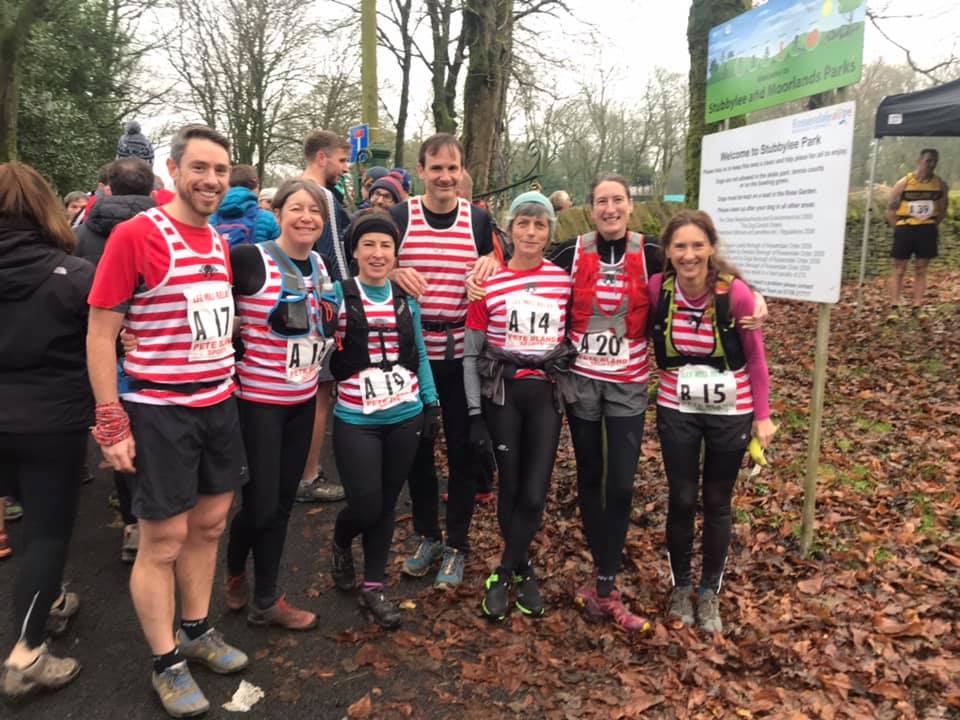 ‘I had no idea what to expect from the race as it’s a little bit further than I usually run. But nevertheless I set off with the intention of trying to win and I climbed hard for the first half of the race, earning the prize for the first athlete to the summit of the first mountain – a 1.5 litre bottle of wine.

The route was very runnable at the start and the finish, but extremely technical on the trails, with lots of tight switch backs, especially on the descents.

After 17km, I was still in the lead and I’d managed to open up a gap on the next runner after a crazy effort on the longest descent where I took a lot of risks!!!’

Unfortunately and unbeknown to Ben at the time, the man in 2nd place was Pol D’Olesa, a Spanish international and Salomon sponsored athlete. Needless to say they endured an epic battle on the final climb, but D’Olesa managed to put distance back between them at the top and by the time they’d reached the last checkpoint in the town of Pego, he was the clear leader. Although Ben finished second, both men had broken the old course record of 1:55. The winner finished in 1:47:22  and Ben in 1:49:17. 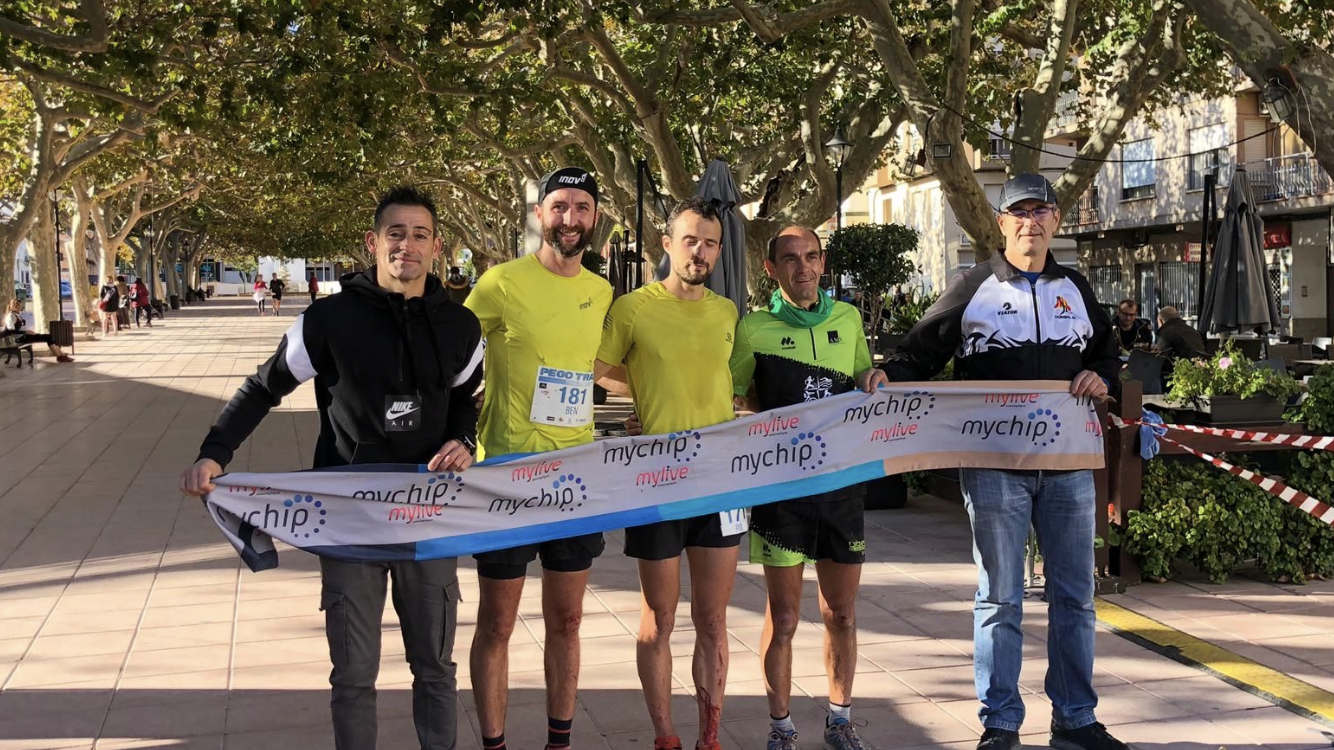 A happy Ben Mounsey (2nd left) with other winners