This week was a bumper one in the local fell running calendar – both on & off the hills & fells.

In terms of racing, highlights include the Tour of Pendle on Saturday 16th November – a 27km (16.8m) race , boasting an eye-watering 4833ft (1473m). CVFR legend Karl Gray stormed to victory in the men’s vet 50 category (beating all other MV40 & MV45 runners in the process) to finish in an impressive 3rd overall. His time of 2h26:47 saw him beat the existing the course V50 record by nearly 3.5 minutes. Grandson of previous record holder, Calvin Ferguson, whose granddad had previously run the fastest MV50 race 28 years ago, commented how it was ‘a delight to witness such a great performance by a top-class fell runner today … Karl Gray made the record his own … well done mate!’

Whilst results from this race have yet to be published at time of press, there were strong runs from Calder Valley’s ladies Vet 40s, who won the team prize, & for the men from Darren Earnshaw (who beat his previous personal best by five minutes). In addition & of particular note was CVFR’s Toby Cotterill, who for his birthday not only ran the race in the number 40 vest, but also ran all the way there! This feat involved setting off from home well before dawn & running through to morning to cross the finish line at exactly 40 miles for his 40th birthday. On the race itself, Toby commented the challenge ‘actually made the Tour of Pendle quite enjoyable’ as he ‘wasn’t racing/pushing it as much!’ 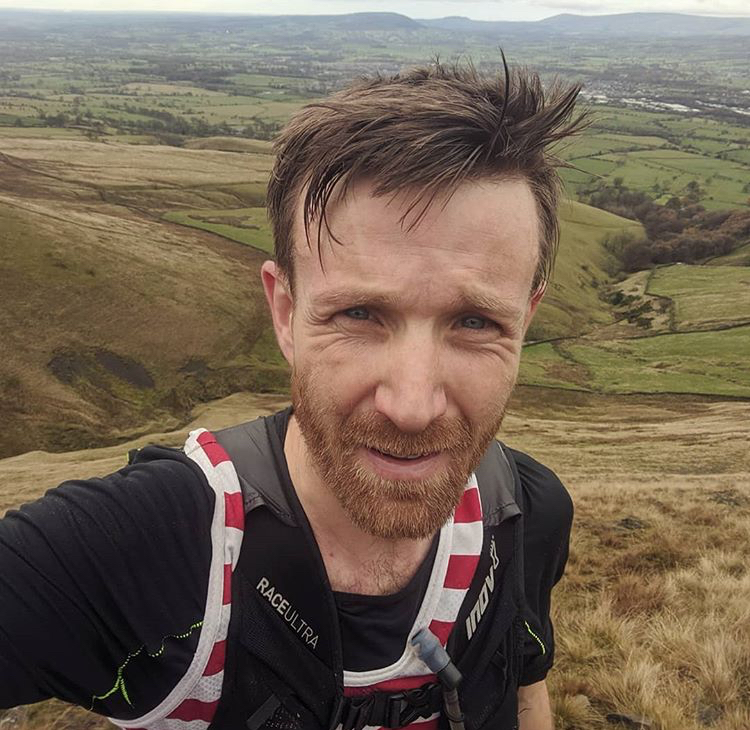 Toby on his 40 mile run for his fortieth birthday 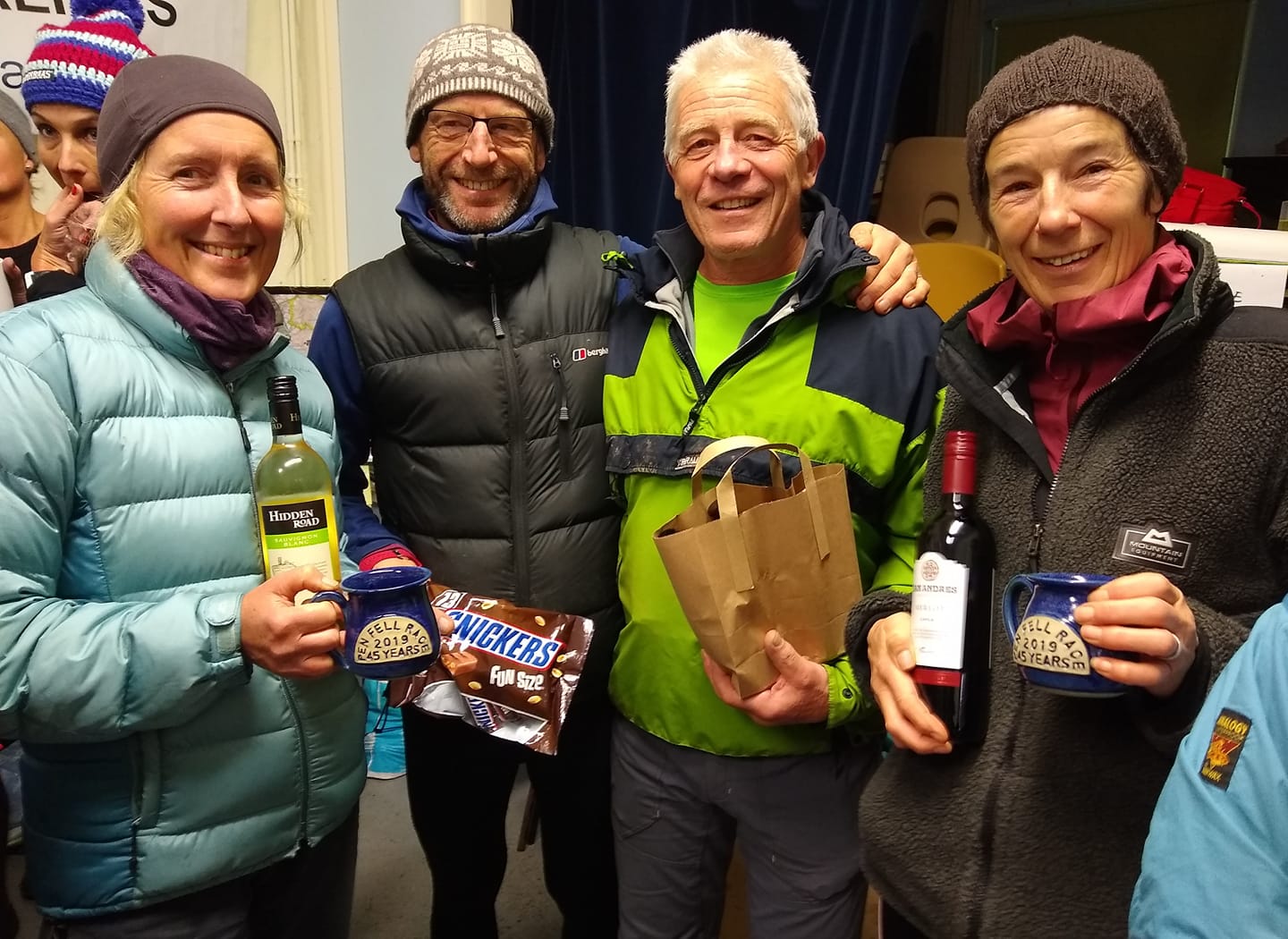 Closer to home, Saturday, 16th November was also the date for the 2019 infamous Harriers vs Cyclists, which as the name suggests is a race that pits those on bikes against runners. This year’s competition was convincingly dominated by the runners, with 10 of the firsts 13 finishers on two legs rather than two wheels.  Vetran runners Tim Brooks & Steven Cavell flew the flag for CVFR at the race, finishing 199th & 205th respectively overall, with Brooks commenting that it was not only ‘harder to drag’ his bike around the course than it would have been running it, but also how it took longer to clean his bicycle afterwards than it took to complete the race!

Sunday, 16th November saw CVFR were out in force for club race the Wadsworth Half Trog. This local classic packs a punch: with 9.3 miles (15km), 1400ft (420m) of ascent, & a varied tough terrain, including plenty of mud & bogs to contend with – to quote Ricky Parish of Todmorden Harriers, it is the ‘boggiest, muddiest race ‘ he has ever experienced! 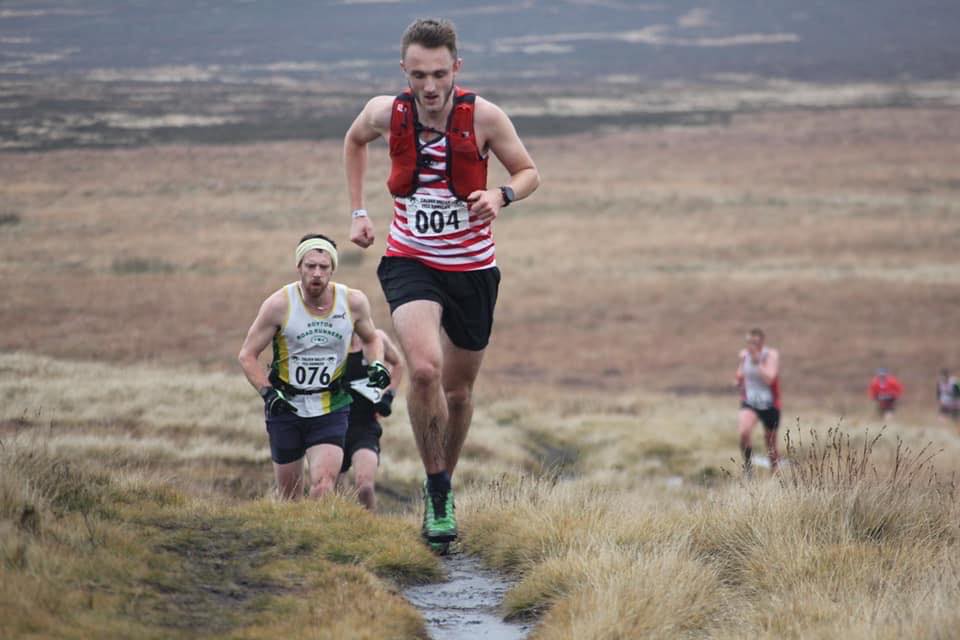 As a partially flagged route, runners need to pick their own lines for much of the race, & local knowledge comes to the fore. CVFR’s Martin Howard added another strong result to his collection for the year, finishing not only first under 21 but first overall by quite a margin, in 1h13 minutes & 51 seconds – an impressive time, given conditions under foot. For the ladies, Calder Valley’s Natasha Butterfield ran another strong race to finish second only to Todmorden Harriers legend Annie Roberts – & with good results from Cass Chisholm & Rachel Johnson – the CVFR ladies took the team prize for the red & white hoops (with the men narrowly missing out to Todmorden Harriers). 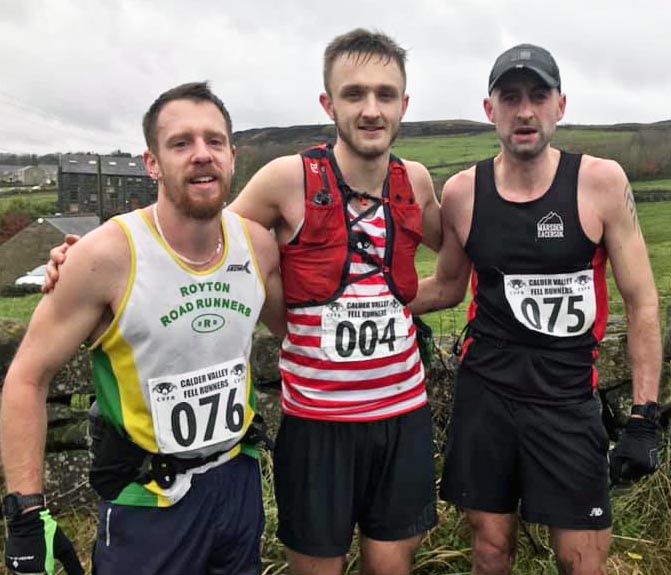 The first 3 over the line at Half Trog

Away from the actual running on the fells, the BOFRA championship awards ceremony (the best 8 results of 16 set races) saw CVFR’s Charlie Ing lifting the trophy for second place (462 points) & Stephen Smithies coming 9th (404 points) in the men’s senior competition. In the Vet50 category, Stephen Smithies took first overall with 477 points. In the ladies competition, despite only running three races, Jo Buckley came 20th in the senior ladies & 5th in the Vet40 category (165 & 180 points respectively). For the juniors, Charlie Pickens’ results saw him win the second-place trophy in the U15 boys’ category (460 points), with red & white stripped teammate Euan Loge coming 4th (422 points) & in the U12, Ollie Pickens placed 12th place (386 points).