Calder’s 2019 Champs right down to the wire

Calder Valley’s 2019 Championships ended in a nail biting finale with many of the top spots up for grabs, right up to the last two fell races of the season.

Saturday saw seven CVFR head north for the Langdale Horseshoe in the Lake District. This tough AL course packs 4,600 ft climb in 12.5 miles. Calder’s Andy Wright, with all to play for in the club champs, described the race:

“The start is very congested, and with 400 runners on a narrow track it is important to be in a good place at the start line for the 300m climb up to Stickle Tarn. The cloud lifted through the morning leaving most of the summits clear which made navigation easier, though Bowfell to Crinkle Craggs was firmly entrenched in cloud so careful compass work was needed as there was nobody in sight to follow.  The rest of the route gave some spectacular scenery to reward those willing to look up from the rocks in front of their feet. 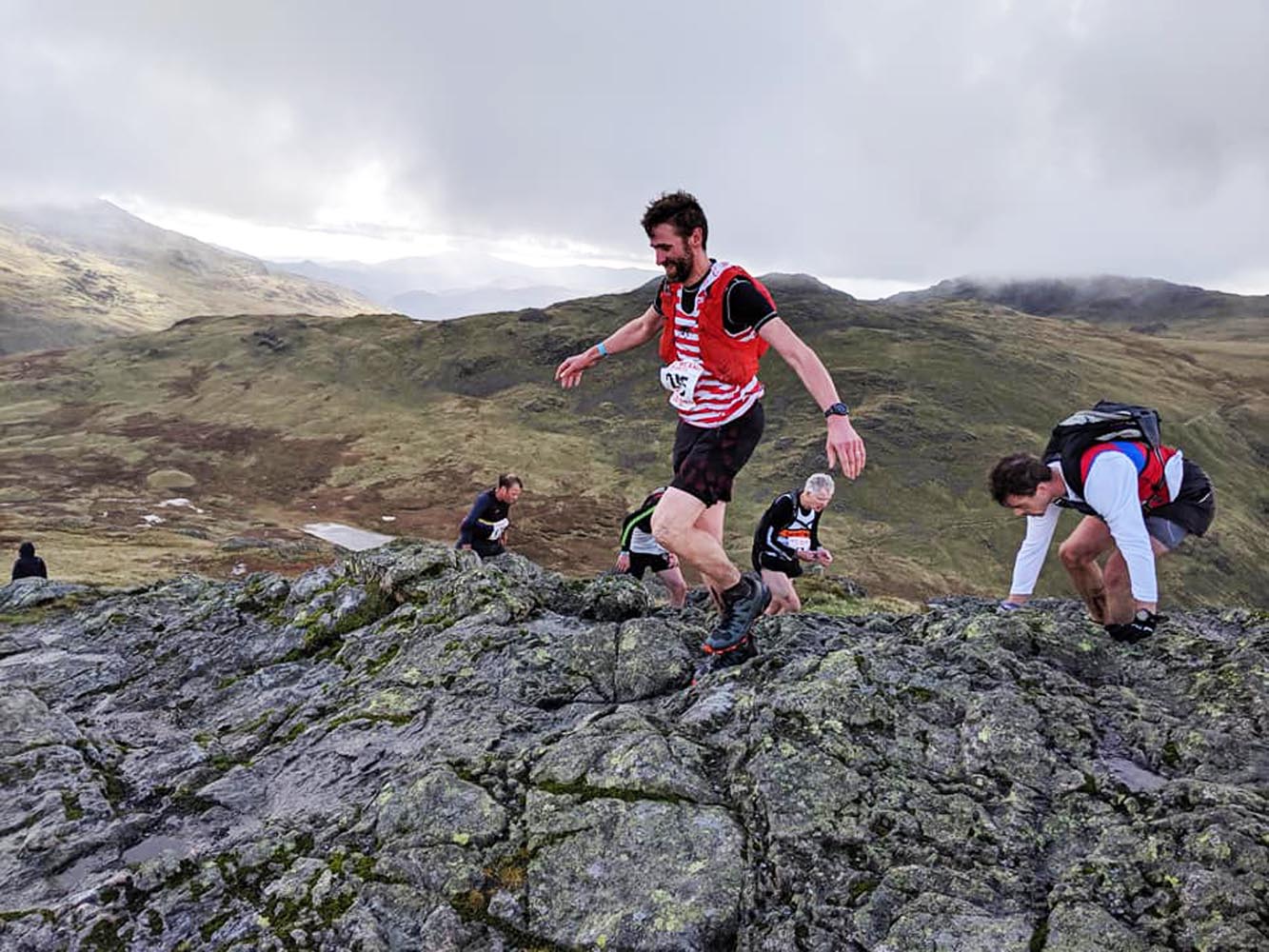 Leaving Crinkle Craggs via Bad Step needed great care after overnight rain had left the rocks extremely slippery.  A steep descent near the finish drew crowds of ramblers who were waiting to see runners end up the wrong way up, which seemed to draw appreciative cheers.  Fortunately for me I was able to stay upright here and gain two last places on the final section of descent and sprint. Pies at the finish, oh yes!  I’m going back next year just for the pie.”

24 hours later, Withens Skyline was the destination for the last race in the CVFR championship calendar. Fourteen Calder hopefuls braved the weather in search of glory. Tim Brooks got the most out of his weekend, reportedly managing to sandwich ‘moshing at The Trades Club’ between Langdale and Withens. 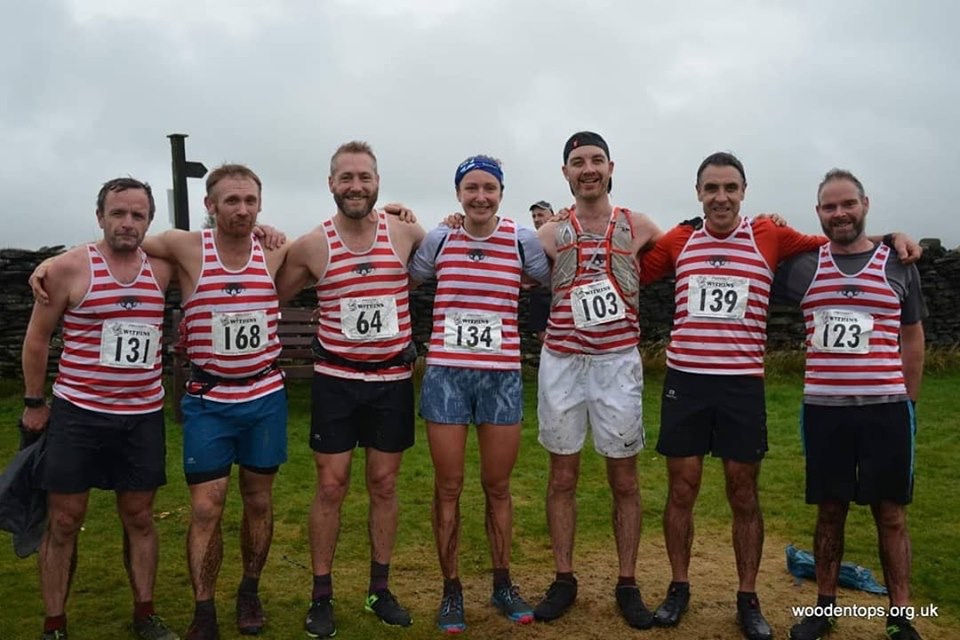 First man home at Withens was Tom Adams of Ilkley Harriers in a time of 41.17. Calder’s international star, Holly Page, triumphed again on home soil to take first woman in 49:05. 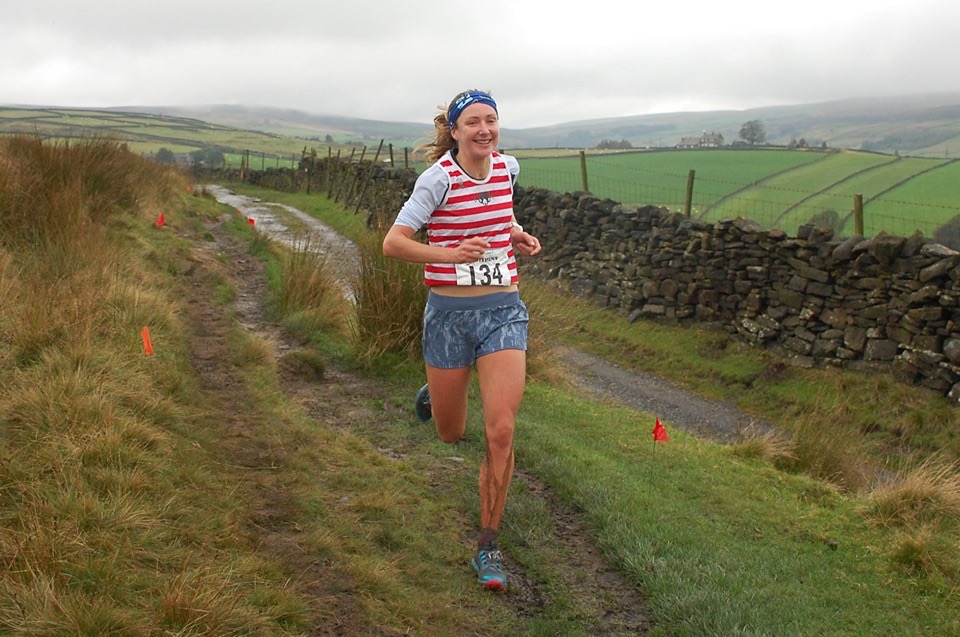 After crunching the numbers, club statistician, Andy Wright summed up the final Champs results: Paul Haigh had fought hard all year and looked like he might be getting his name on the club champs trophy, but on the last section of the last race of the year he was pipped by Dan Marsden, thus leaving him one point behind Johnny Croston.  No sharing of this trophy this year as they each retain their trophies from last year.

Meanwhile in the Ladies competition Catherine Holden and Charlotte Wetton retained their 1st and 2nd titles joined by Eileen McDonach.

The Handicap competition was really tied up some time ago, with Rob Rawlinson getting max points, followed by Tamsin Cooke.

In the vets competition, Johnny Croston and Catherine Holden both did ‘the double’ to take the Vet titles too.

Mark Wharton was out for another max 100 points today in the V50 category and cemented his position as Vet50 champion, pipping Toby Sydes by two points. 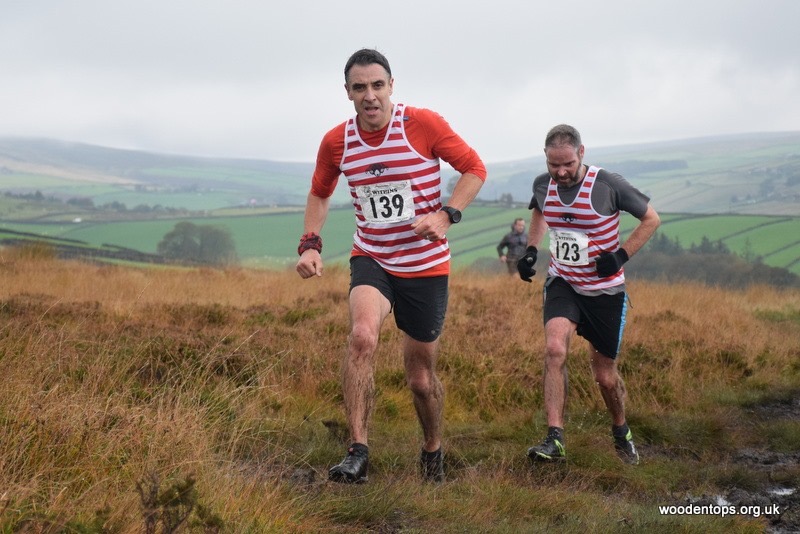 Calder also had much to celebrate this year with a bumper crop of CVFR successfully completing Bob Graham (BG) rounds.  This 66 mile, 27,000 ft circuit of 42 of the highest peaks in the English Lake District, within 24 hours, is the ultimate test for elite fell runners. Of the 100 runners who attempt it every summer, only one in three are successful. CVFR efforts were rewarded on Saturday night when six received their BG certificates. From left to right is Dan Barron, Mike Clayton, Dougie Zinis, Helen Buchan, John Allan and Stuart Russell. Helen has joined Ribble Valley but she was a club member when she did the BG. 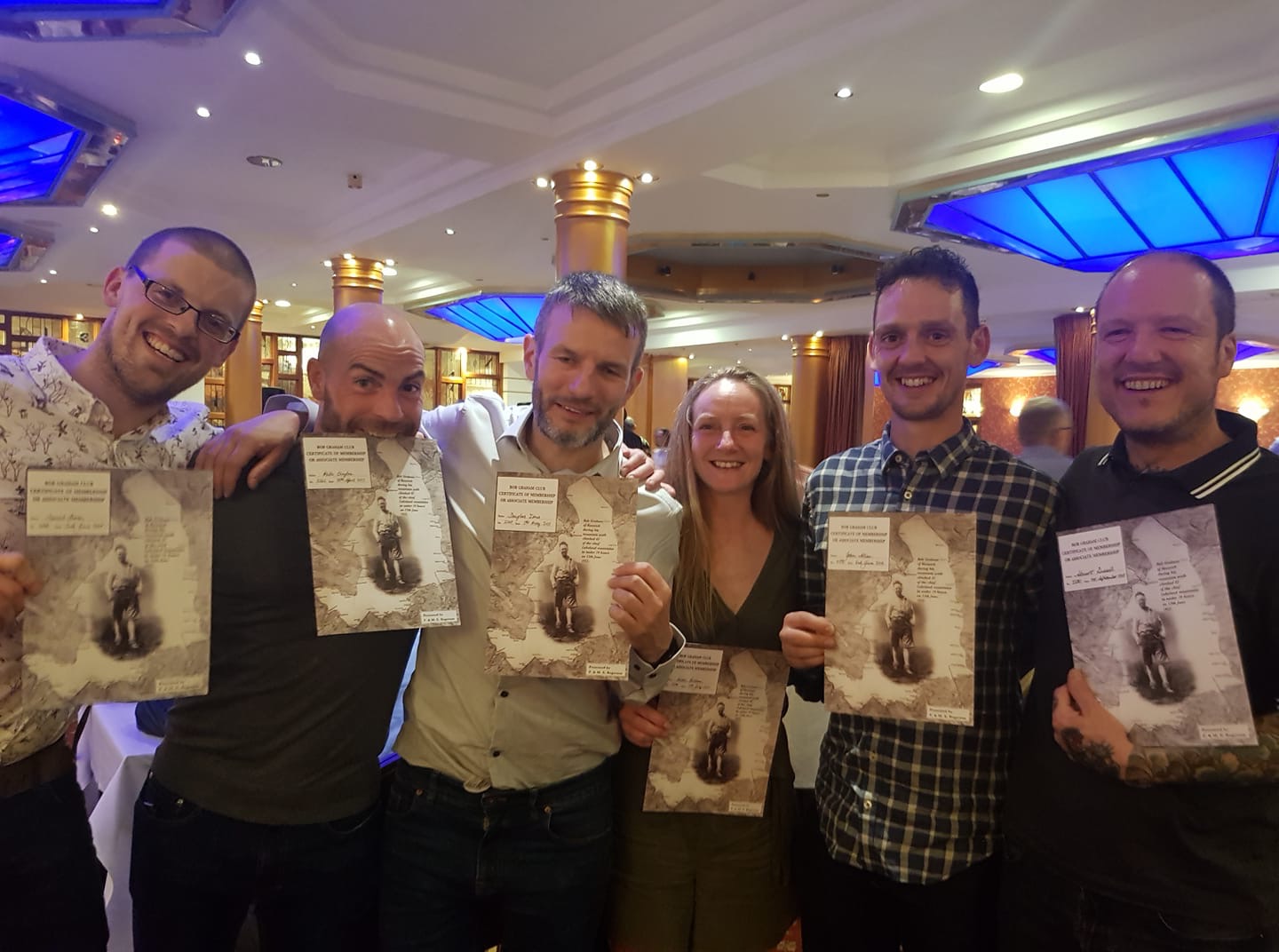 The BG gang with their certificates 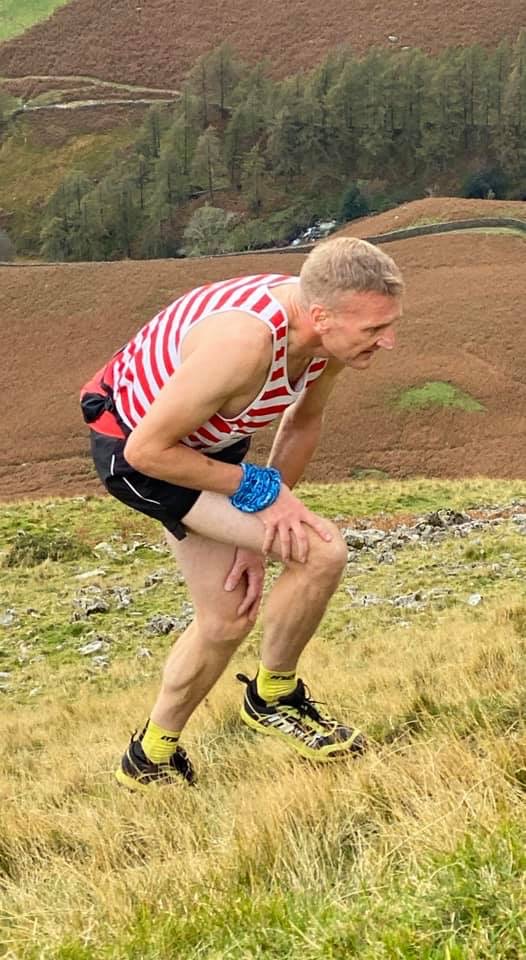 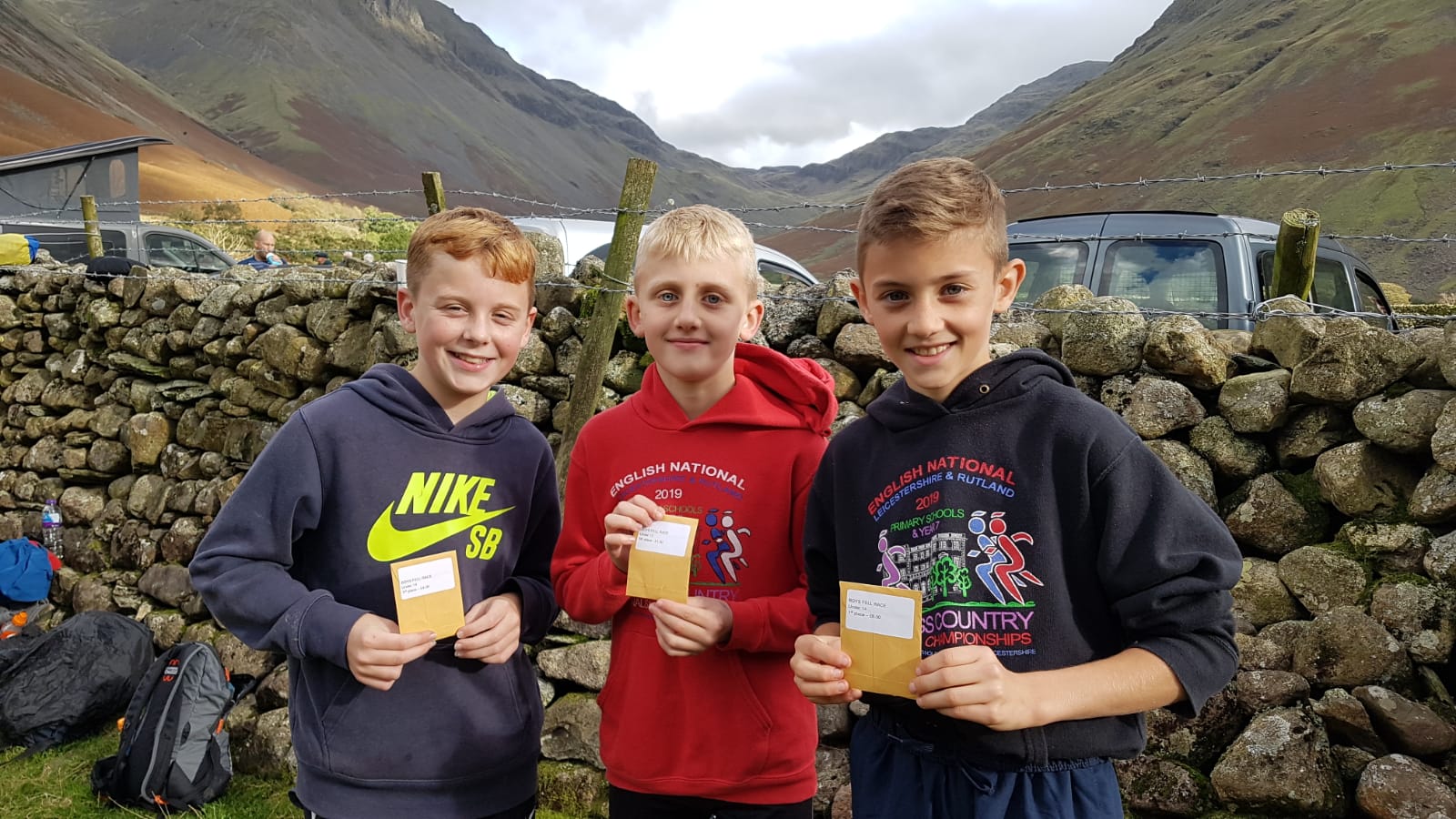 Two Calder Valley juniors also made the long journey up to Wasdale BOFRA Championship on Saturday. The weather held to provide perfect conditions for the steep climb up Kirk Fell. Charlie Pickens came first in the U14s and a delighted Euan Logue of Halifax Harriers picked up 3rd boy. Ollie Pickens’ rapid descent earned him 5th place in the u12s and his first prize money of the year.

Charlie Pickens had an excellent BOFRA season to finish 2nd overall in the U14s and is looking forward to picking up him trophy at the presentation in November. 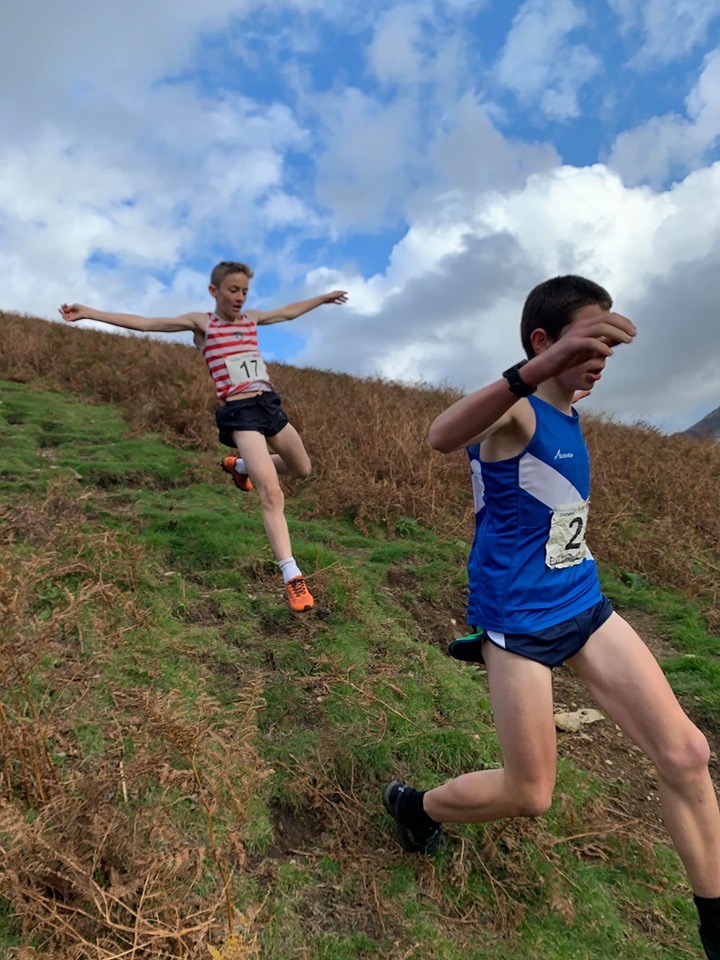 Lakes in a Day Ultra 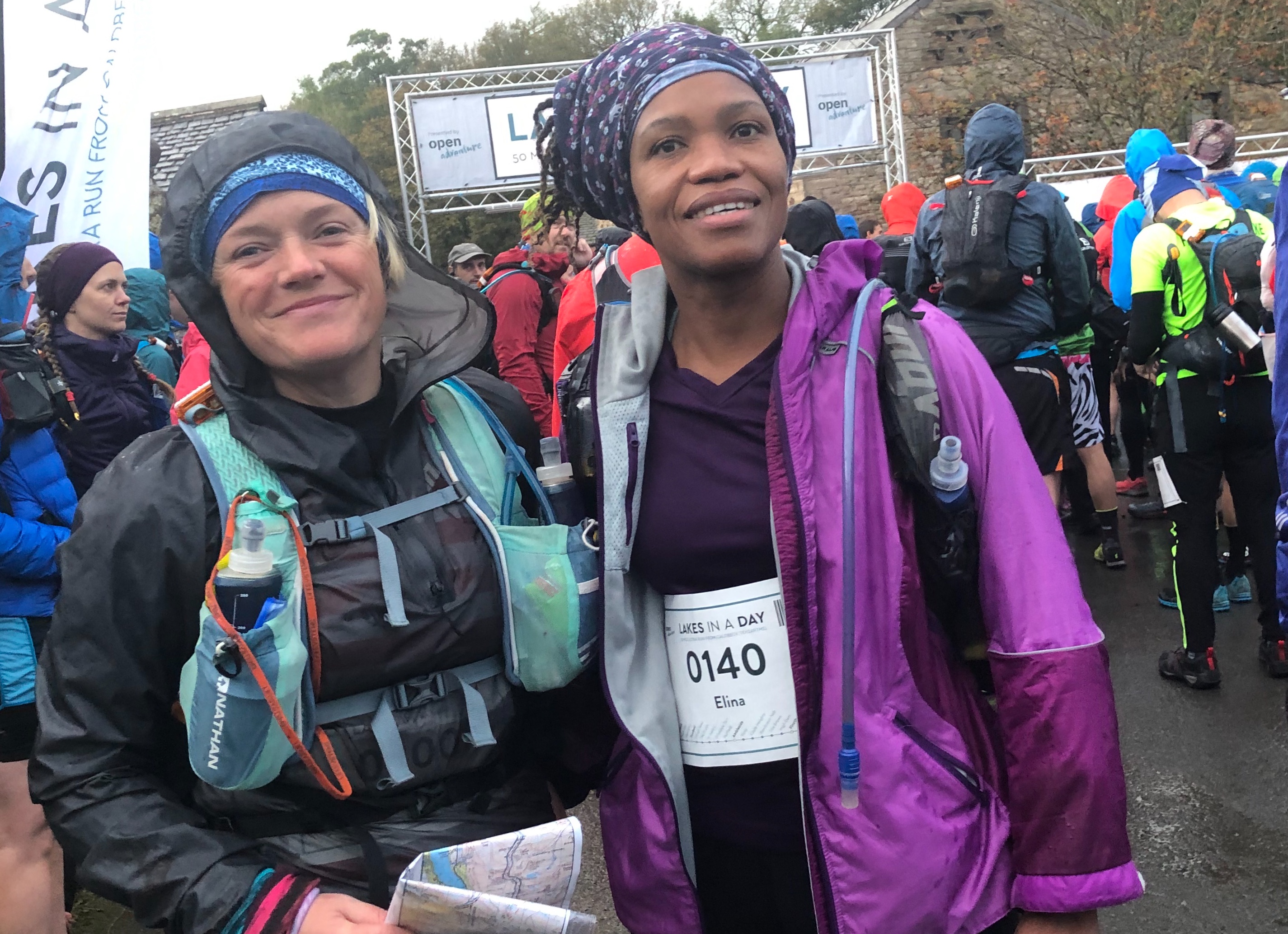 CVFR’s Elina Eady and Eileen McDonach ended this year’s Ultra running exploits on a high at the weekend to take on the epic, 50 mile, Lakes in a Day ultra race. This runs from north to south of the Lake District, taking in 12,000+ ft of climb, including Helvellyn and Fairfield. Starting in Caldbeck on Saturday morning, they finished in the early hours of Sunday in a total of 19:21 hours. Elina Eady described it as “one of the most challenging adventures I have ever undertaken, but I enjoyed the experience and the company of my running buddy, Eileen. We were so lucky with the weather that the mountains were breathtaking. I loved every moment.”