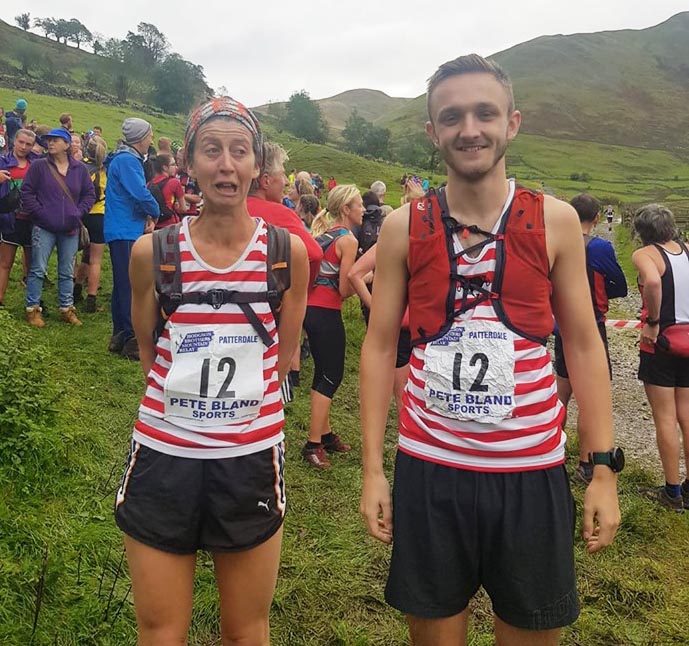 Following more than a decade of top 5 finishes, Calder Valley Fell Runners men were hopeful of a strong result last weekend in the annual Hodgson Brothers Relay from Brotherswater, Patterdale in the Lake District.

This Lakeland mountains relay race, held annually in memory of a Leeds based runner who was tragically killed in a road accident the day after winning the prestigious Karrimor Mountain Marathon in Cumbria, is run over four legs with competitors running in pairs.

The weather forecast for the event didn’t look promising, however, conditions on the day were far more favourable than first predicted. The ground was saturated following some heavy overnight rain, but visibility was good and this meant that the race would be won on athletic merit, rather than navigational prowess.

First off for the Calder club’s A team was young relay debutant Charlie Ing and his partner Alex Whittem. They completed the 4.5 mile leg from Patterdale to Hartsop in an impressive 3rd place, battling with Keswick to the finish line, both teams following Ambleside AC, who led the initial charge. In the mixed team competition Jackie Scarf and Carole Fryer got the team off to steady start.

Next up for the A team were the experienced pair of Ben Mounsey and Gavin Mulholland, who took up the mantle for the tough 7 mile run to Kirkstone Pass. They ran a solid leg but ultimately lost valuable time on their major rivals and finished in 5th place overall. Martin Howard and Jo Buckley took up the mantle for the mixed and gained 5 places to take the tam up to 59th place.

Even the dynamic pairing of Kay and Gray (Darren and Karl), wasn’t enough to improve the fortunes of the team. They ran well on leg 3, but could only maintain a 5th place finish, leaving Adam Osborne and Matthew Roberts with too much to do on leg 4. They managed to hold their position but didn’t gain enough time on Helm Hill, who finished 4th overall. An excllent run from Lee Shimell and Paul Haigh hauled another 7 places for the mixed team on leg 3 and with a very strong run from Dougie Zinis and Jonny Croston on leg 4 took the team up to 44th and 6th mixed team.

Calder Valley were the first Calderdale team to complete the 24 mile route, finishing 5th from 70 teams.

The event was won by Keswick AC, who recorded their 3rd successive title. Ambleside AC took 2nd and Dark Peak finished in 3rd. The ladies race was won by local favourites, Helm Hill and the mixed team winners were Ribble Valley AC.

Calder Valley will treat this as good practice and a dress rehearsal for the British fell relays, held in Derbyshire, in two weeks time.