Despite the scorching weather, the sweltering heat did not put a large number of Calder Valley runners off heading to Tebay for the English Championships race. Tebay was also one of the races in the CVFR club championships. The 8 mile race (3,000 ft climbing) saw 451 runners finish, with Ben Mounsey first back for CV in a time of 01:15:13 placing 7th. The eventual winner was Sam Tosh of Rossendale Harriers in a time of 01:12:51. Karl Gray took second in MV45 and finished 13th overall. In the same age category Gav Mulholland had another excellent run placing 4th and with a win, a second place in the other races he is in an excellent position to win an individual vets medals. The vets team are also in a strong medal winning position with 3 races still to be contested they sit in gold medal place.  In terms of the club championships after Tebay, very little changed at the top. In the handicap champs James Cooke held onto first place going into the Cragg Vale club championship race next week. It is all to play for still. 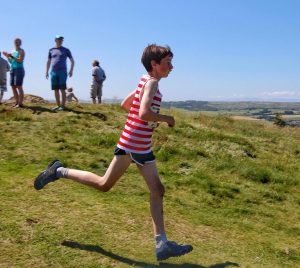 On the Sunday several CV fell runners also took part in the Helm Hill race near Kendal, which is part of the British Open Fell Race Association (BOFRA) series of events. The races are characterised as being fast, short (1 miles – 5 miles) and with a substantial amount of ascent. Helm Hill was no exception and provided the runners with 900 ft of climbing over 3.3 miles. William Hall did exceptionally well in the U12 race, coming home with a substantial lead as 1st boy. Patrick Casey also had a great race finishing 6th. As for the seniors, Ben Mounsey was out in force, having already finished 1st the weekend before in the Hawkswick Dash BOFRA race. This time he finished in 2nd place – still an excellent result having competed in the English Champs the day before!

Elsewhere in the fell racing calendar Steve Smithies had a good race a Brown Wardle in East Lancashire, finishing 9th and Paul Gilbert battled through the heat at the relatively new Castle Canter race at Dobroyd Castle to finish 8th.