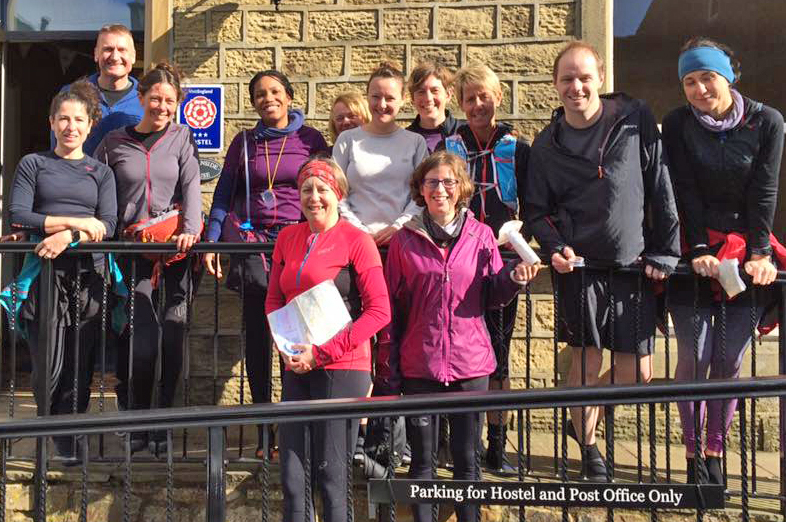 The CVFR gang with compasses to the ready

Twelve Calder Valley Fell Runners headed north (or was it north by northwest?) to Kettlewell in the Yorkshire Dales for a fantastic weekend of navigation training. CVFR vests are often likened to ‘Where’s Wally?’ shirts or pyjamas, so teammates at ‘Nav Camp’ were hoping that their pyjama party wouldn’t result in a search party.

Thirty runners, supported by a dozen instructors – including top navigators Mandy and Greg from Todmorden Harriers – were bunked at cosy independent Kettlewell Hostel, whose flapjack alone made course attendance well worthwhile! The course is organised and sponsored by the sport’s friendly parent body The Fell Runners’ Association and held twice-yearly, with a Lake District edition taking place in September.

Runners were taught the rudiments of compass bearings and identifying features from maps at scales from 1:5,000 to 1:50,000. Soon, techniques such as ‘contouring’, ‘aiming-off’ and looking out for ‘handrails’ and ‘catching features’ were added to the repertoire. Runners are split into small groups throughout the weekend, each led by an instructor, so those already familiar with the basics from their Duke of Edinburgh days were able to delve deeper, flush out personal bêtes-noires and unearth some lesser-known tricks of the trade. Everyone came back better navigators than they started out.

A mix of theory sessions over a brew in the hostel, walking on the open fell to learn how to navigate off sinkholes and sheepfolds and tips for tracking down re-entrants, the weekend also throws in a few chances for fun competition – this is fell running after all!

Runners were unleashed on to a short orienteering course, wielding compasses, and learning that a suspiciously grey waterbody on a map may well be a quarry! Back for a debrief and a hearty feed, things were ratcheted up a little for a night navigation session. With pairs set off at intervals, and challenged to find controls in different orders, they could rely only on Map, Compass, Observation & Communication (and hope their headtorch didn’t fade before they did).

Keen to train runners in all elements of the sport, the organisers don’t neglect a bit of endurance training, offering two ‘very optional’ pre-breakfast runs, setting out from the hostel mere hours after some bleary-eyed runners had found their way back from the local boozer.

On Sunday was a 10k solo navigation challenge. Again, start times were staggered. Runners prepared their own routes in advance, then it was up to them whether they stuck to their planned routes or ad-libbed it based on conditions under foot and things that may or may not have been short cuts! This was a brilliant chance to practice and consolidate new skills, and it was fantastic to see runners who had come with a sworn enmity of map and compass zipping their way around and hunting down the 10 well-concealed controls.

This mass up-skilling will no doubt lead to things hotting up in the Calder Valley Fell Runners’ Club Championships, with the Ladies Veteran Trophy – which went unawarded in 2016 due to lack of participants – looking to make a come-back with the force of one of Ben Mounsey’s scalded-cat starts. Medium and long category fell races often require runners to navigate their way around courses. The inaugural Hebden Bridge Mountain Marathon will be a great place to test out skills in a competitive environment.

If you enjoy running in our stunning woods and fells, why not try coming joining a local club, where you’ll find camaraderie and support, as well as cake and ale? Calder Valley Fell Runners will be hosting introductory sessions from Mytholmroyd once the clocks have gone forward. Next stop the Fell Runners’ Association and ‘Nav Camp’!