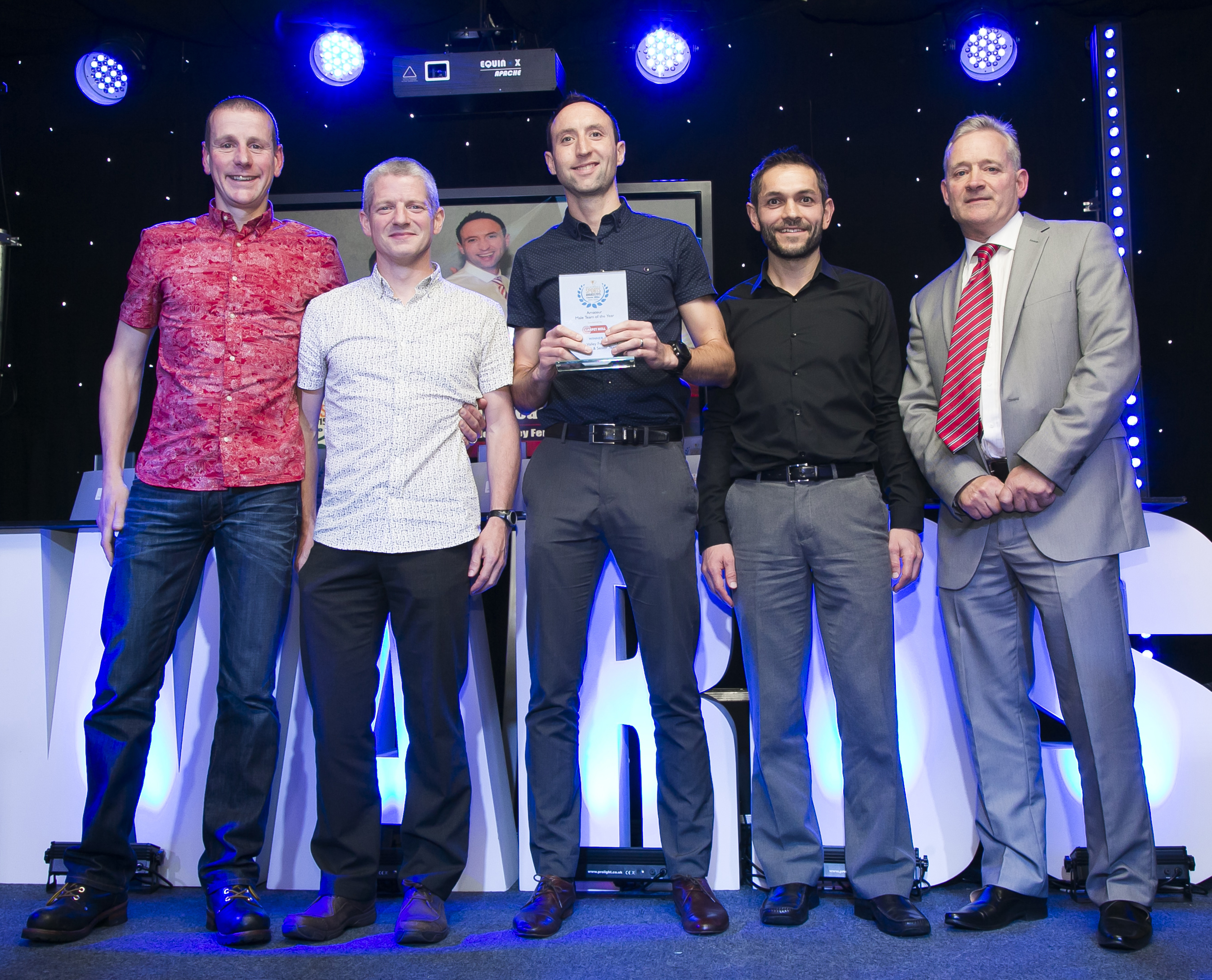 Calder Valley had a stellar 12 months on the fells so it was no surprise that they were nominated in a few categories at the recent Halifax Courier Sports Awards. They were nominated and went on to win the Amateur Team of The Year prize. This was jointly awarded for both the seniors and V40s men after their best season ever by mopping up English and British team titles before adding the British Relay Crown recently.. This was followed by Ben Mounsey being voted the Amateur Male Sports Person of the Year much to his surprise!!! Ben has stepped up a level in his sport this year being honoured with both English and Great British vests and he was GBs top runner at an event in Italy recently. He revealed the secret of his success to the audience – a 70 mile per week training schedule. Co host Pete Emmet had the audience laughing when he said that was a far as he did in his car!!!

A couple of weeks ago I’d been contacted by our local newspaper, The Halifax Evening Courier, to tell me that I’d been shortlisted for ‘Amateur Sportsman of the Year’ at the annual Calderdale Sports Awards. Obviously I was both extremely flattered and excited about attending the event. What made the news even sweeter was that my good friend and training partner, Karl Gray, had also been shortlisted. In addition to this both the Calder Valley Open and V40 teams were in the running for ‘Best Amateur Sports Team 2015’.

Karl was crowned the World Mountain Running V45 champion in September, capping yet another fantastic season and cementing his name at the top of the Calder Valley ‘Legends’ list. I’d like to think I’m close to climbing up to those dizzy heights myself but I’ve still a way to go before I match Karl’s great achievements over the last decade.

The club nomination for ‘Best Team’ was no great surprise to me, both the Open and V40’s were crowned English and British fell running champions a couple of months ago and of course we managed the ‘Grand Slam’ by also winning the British Fell Relays last month at Pendle. A fine season indeed. I was hopeful of us walking away with at least one trophy at the awards ceremony.

The presentation was once again held at The Venue, Greetland and as ever it was a well organised affair. Huge thanks to both the Evening Courier and all the sponsors for organising and funding the event. I also need to praise all of the hard work and genius that goes into writing the sports reports. Jim Mosley, Tim Brooks, Steve Grimley (CVFR) and of course Ian Rushworth (Sports Editor at the Courier) and his team. I think it’s fantastic that Calderdale’s finest sports stars are recognised for all their hard work and commitment.

Martin Howard (Calder Valley Junior Fell Runner) was also nominated so Kudos to him for a great season, one to watch in the future I’m sure.

What did cross my mind was that if the top female award had gone to a runner then perhaps it would lessen the chances of a male equivalant doing the same. At least we were up for the team prize I thought. Also strange to think that our Calder Valley Open team were competing against the vets too, I suppose it doubled our chances of winning! 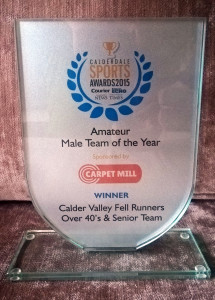 When they announced the nominees for ‘Best Team’ I was really nervous, I realised then how much I wanted us to win. I joined Calder Valley about 8 years ago and during this time I’ve seen the club grow in stature and watched the men’s team slowly transform into the best team in Britain. I’d like to think I’ve played a significant role in making this happen. I remember running for Stainland Lions in 2006 at Thieveley Pike when it was an English Championship counter that year. It was my first champs race and I came 10th, beating Karl who was competing for Calder Valley. After the race he and Jo Waites both asked me to join the club. Karl is one of my fell running heroes so naturally the thought of racing in the same team as him was very appealing. I laid my cards on the table and negotiated a contract that was to massively change the fortunes of both great clubs. I agreed to join Calder Valley in a record breaking deal…2 pints of Guinness and a packet of Big D peanuts. Sky Sports got hold of the news and it was all over the telly for a couple of weeks, I’m pretty sure most of you reading this will remember it well, ground breaking stuff 😉 Also as part of the deal both Jo and Karl signed 2nd claim for Stainland and the rest as they say is history! Stainland Lions began smashing the local Cross Country league and Calder Valley went from strength to strength as many others at Stainland followed my lead. Since then the club have signed Gav ‘Mad Legs’ Mulholland, Shaun ‘Lardy Lancs Lad’ Godsman, Alex ‘The Flying Postman’ Whittem, James ‘Logie Bear’ Logue, Tim ‘Timbo Baggins’ Ellis, Richard ‘Ironman’ Pattinson, Math ‘The Welsh Whizzard’ Roberts, Jason ‘Benjamin Button’ Williams and Daz ‘Special K’ Kay, to name but a few! Success breeds success. As well as being team mates we’re also great mates so I wanted to win the team award just as much as the individual.

When they announced the winner I was chuffed to bits…Calder Valley Open….AND V40 team! We’d all been honoured! A brilliant decision and one that celebrates our 10 year journey of becoming the best in the country. 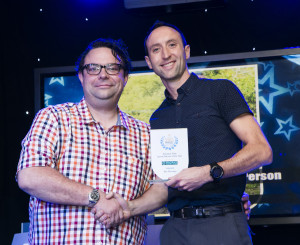 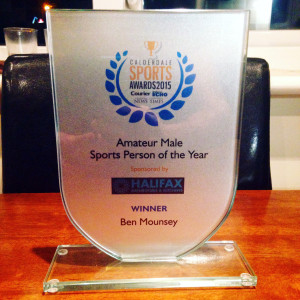 Shortly after we returned to our seats it was straight onto the main award for the night…’Amateur Sportsman of the Year 2015’. They announced the four nominees, including Karl and then me. I genuinely would have been happy if either of us had won, I honestly believe we’ve both earned it this year.

There was a long pause as the sponsor announcing the award fumbled with the envelope. At first I didn’t recognise the winner, his name wasn’t familiar. In fact I couldn’t even remember him being announced as a nominee. Then I realised it was me! The guy reading my name was obviously a ‘back page courier virgin’ because he couldn’t even vaguely pronounce ‘Mounsey’ . Still I didn’t care as I walked up to the stage because I was proud as punch.

For me this award represents the 2,700 miles, the 395 hours and the 380,000 ft of climbing that I’ve done so far this year. I’ve trained hard, raced hard and earnt every bit of success that I’ve had the pleasure of enjoying. It’s not come easy and I’ve not taken my fitness for granted. So when I say it’s one of the finest achievements of my career I really mean it.