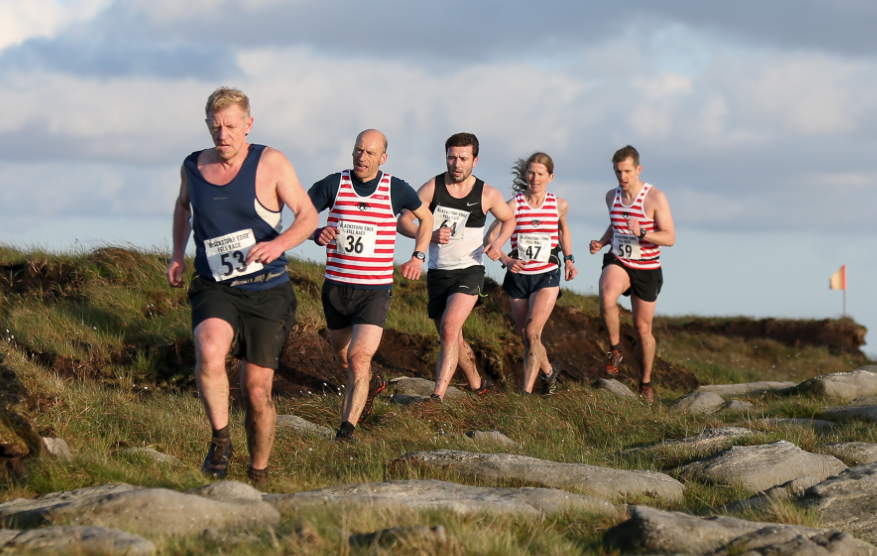 It’s that time of year again, late May, the season fell runners everywhere have been waiting for. Skylark song fills the moors, the woods are fresh with vibrant green new leaf, and the valleys are decorated in swathes of bluebells and wild garlic. As temperatures rise and evenings lengthen, thermals, leggings, waterproofs, and survival gear are exchanged for the simplicity of a vest and shorts.

Spring Bank Holiday weekend heralds the season of Gala sprints in the Dales, Lakeland Classics and short fast local evening races. The fell running calendar moves into early-summer overdrive as runners take their pick from events on virtually every day of the week. Calder Valley Fell Runners were spoilt for choice and headed off to enjoy a bumper bank holiday week of racing.

The race that signals the start of summer season for many local runners is the Blackstone Edge Fell Race. Now in its 31st year the race is the first of the local midweek events taking full advantage of the late evening sunshine. Such was the anticipation ahead of last Wednesday evening’s race that a record 47 Calder Valley runners lined up at 19.30 on the Lydate start line, just above Littleborough.  Kevan Shand, legendary race organiser, famed for his sense of humour and surreal prizes, ranging from toilet rolls to pineapples, sent the 135 assembled runners on their way, under cloudless blue skies. 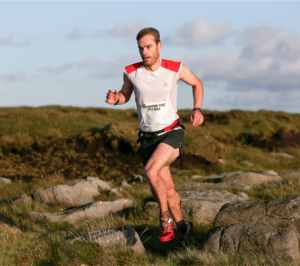 The 3.5 mile route is definitely a race of 2 halves. The uninitiated must have wondered if Shand’s sense of humour had turned into a sick joke as they soldiered straight up 1200 feet of unrelenting moorland slopes, hindered by deep bogs, and ankle turning tussocks to the rocky escarpment of Blackstone Edge. Their agony quickly turned to ecstasy having made it to the Trig point. Lactate-filled muscles recovered on the short run along the ridge, before the still tightly grouped runners plummeted straight back down the way they came, overtaking one another in daring bursts of acceleration, aided by gravity. The brain switches off during these  high speed, helter-skelter descents. The feet take over, as runners experience the sensation of utter freedom and exhilaration, hurtling at break-neck pace over rocky and uneven ground, skipping and leaping over rocks and tussocks – it’s totally addictive and worth every drop of sweat on the climb.

In a thrilling finish, Horwich’s Danny Hope stole a 16 second lead on Valley’s Alex Whittem (2nd 30.40) to seize victory in 30.24. Unsurprisingly Calder Valley then packed the top 10 to easily take the men’s team prize. Notably, it was the young guns that clocked the next best times. Joe Crossfield (3rd 31.37 ) and Jack Denton (4th   32.31 ) demonstrating that the future is bright for the red white hoops. Mark O’Connor (6th) Jon Smith  (8th  33.18) and Martin Howard (10th  33.46) all had fine runs to give Valley 6 of the top 10 places. Not bad a result considering the majority of  the A team were resting following their exploits on the Stretton Hills and the Calderdale Way. 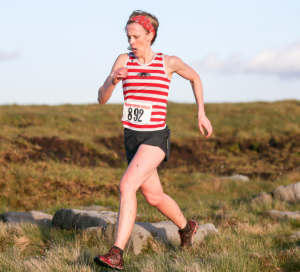 Gayle back to winning ways. Courtesy of Nicolas Dawson

Calder Valley’s Ladies went one better as Gayle Sugden’s impressive 36.27 was enough to see off all her rivals as she took first place in a Calder Valley 1,2,3 clean sweep, with Anne Johnson (2nd Lady 38.18) and Lindsey Oldfield (3rd  40.15).

Veteran 60 runner Tony Steward was Calder Valley’s representative at Helvellyn and the Dodds on Sunday .He finished 148th out of 168 finishers over 15 miles, with  4400 feet of climbing, starting from Threlkeld Cricket Club. He set a PB of 3hrs 47mins in his third attempt at the race. Simon Booth (Borrowdale) won in 2hr 18mins and Hannah Horsburgh (Keswick AC) smashed the women’s record by 15 minutes and finished 10th overall in 2hrs 32mins.

Heptonstall’s Holly Page, now residing in the south and running unattached and Calder Valley’s Jo Buckley finished first and second in the women’s race at the Austwick Amble, which is part of a traditional Dales gala. Page set a course record for the 8.1 miles and 1197 ft of climbing with 56.03 while Buckley finished in 58.07. Wharfedale’s Nick Charlesworth won the men’s race with Calder Valley pair Steve Smithies and Dave Culpan 12th and 107th respectively in 55.11 and 71.29.

Calder Valley’s Barbara Lonsdale was seventh lady finisher in the 19 mile Trincea Trail race in the Italian Alps, 37 miles north west of Milan.She was 79th overall out of 423 in a contest which had 5,200 feet of climbing.

Lonsdale said: “The race was tough. It was really hot and I struggled with cramp for the last few kilometres. The route weaved its way through and up the mountain via the tunnels built in the first world war. In true fell running style I cycled 50km home afterwards – very slowly!”