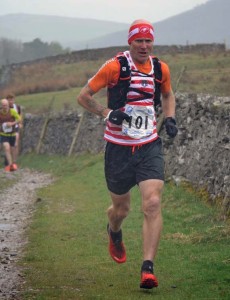 Last weekend, while many people looked towards the London Marathon, the fell running world headed to the Dales where two long distance events took place on Saturday.

The Three Peaks is advertised as the marathon with mountains and starts at Horton-in -Ribblesdale. It is a little short of marathon distance at 23.3 miles long but it does have a vertical mile of climbing, as runners take in the three peaks of Pen-y-ghent, Whernside and Ingleborough. This year it was also the second ‘long’ race in Calder Valley Fell Runners annual Club Championship.

The weather was an added challenge as rain at the start turned to snow for the later runners on Whernside and Ingleborough. Many runners returned with frozen hands and blue lips and were grateful for bowls of stew at the finish. 802 people started but 100 dropped out or were timed out.

Richard Pattinson, the flying postman, put in Calder Valley’s run of the day. First back for the club and first V50 in the race, he was 26th overall in a hill smashing 3 hours 21 minutes and 5 seconds.

The race was won by the appropriately named Ricky Lightfoot from Maryport in Cumbria in 2 hours 51 mins and 42 seconds. Helen Bonsor of Carnethy Hill Running Club won the women’s race and Calder’s Jo Buckley was first back for the Calder Valley in 10th place. Jo said she struggled on the descents and could have improved her place if the race had gone up Pen-y-ghent again.

Rob Jebb of Bingley took the V40 record from Calder’s Karl Gray by 18 seconds. Will Karl return next year to try and claim it back?

Other notable runs from the Calder Valley team were Joe Washington 61st and Graeme Brown 67th. Three Peaks first timer, Ian Glendinning said it took him longer to recover and get changed after finishing than it did to run the race. Toby Sydes ran a personal best for the race in 4 hours 56 mins and 41 seconds.

One of the loudest cheers of the day was for Clayton-le-Moors’ Kieran Carr who smashed the V70 record by some 15 minutes coming in 4 hours 44 mins and beating many runners half his age. 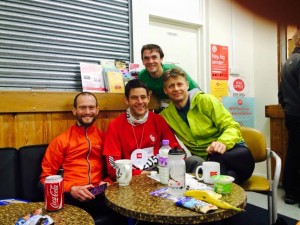 Some of the lads before the start still looking happy!!!

Many of Calder Valley’s best ultra runners took part in the Fellsman, a sixty-one mile race from Ingleton to Threshfield that shares Ingleborough and Whernside with the Three Peaks. However this monster of a race then takes in Gragareth, Great Coum, Blea Moor, Great Knoutberry, Snaizeholme, Dodd Fell, Fleet Moss, Buckden Pike, and Great Whernside: 11,000ft of climbing in total.

The Fellsman initially shared the same weather as the Three Peaks. Some people retired and many people considered doing so at Dent as there was severe risk of hypothermia. Those that carried on were treated to clearing skies, crisp air and a star-lit night. Only the fastest runners finish this race before nightfall. 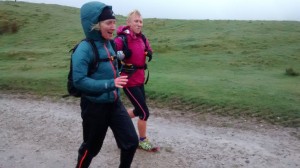 First back for Calder Valley were Simon Bourne and Kevin Hoult who finished together in 8th place taking 12 hours and 17 minutes. Chris Mawdsley had a great run to finish 17 mins later in 13th place, and again, the 1st V50. Other Calder runners who completed the 61 miles were Martin Huddlestone, Phil Scarf, Bill Johnson, Mark Wharton, Jackie Scarf and Linda Murgatroyd. Martin, Phil and Bill were all in the top 50. 374 participants started but only 279 finished.

The men’s race was won by Adam Perry in 10 hours 23 minutes. The first woman, breaking the previous record by an astounding 41 minutes, was Jasmin Paris of Carnethy in 11hours and 10 minutes and 4th place overall.