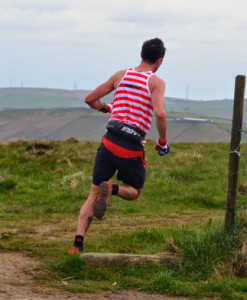 However, the race was over as a contest after about ten yards as Ben blasted out in trademark fashion and was not seen again for another hour or so, returning to Diggle in a course record time of 1:01:04 and leaving a decent field in shreds. Team mate and training buddy Gavin Mulholland was home in second place and looked stunned by how much Ben is taking out of fields at the moment. Gavin, Northern Ireland international and no slouch himself, commented, “Fair play to Ben, I can’t live with him at the moment, he’s taken things to the next level. He deserves all his success for the amount of training and preparation he puts in. He’s on fire.”

Other notable runs were had by Richard Sunderland, Ben Frechette and Iain Powell. Further back, Toby Sydes shone once more, Dan Biggs carded another fine run and Graham Davy and Carolyn Shimwell ran well in the mixed pairs.

This charming and lovingly staged race takes its name from the open invite for all involved to provide a cake for post-race consumption. Your correspondent can happily confirm that few did not oblige. Reminiscent of a Dad’ Army scene, Diggle Village Hall resembled Mr Kipling’s as a plethora of home baked beauties adorned the main table, and with tea and coffee aplenty to be had, the athletes took a welcome respite from energy gels and glucose drinks to tuck into the more traditional feast in front of them. Overall prize went to the dreamy Lemon Drizzle, with the Malteser Cake in second and Diggle Ladies’ Victoria Sponge a close third. 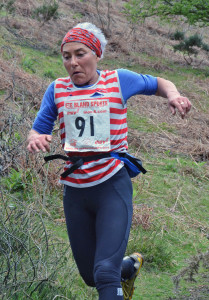 Sally concentrating as she goes for 2nd lady at Coniston

While runners were enjoying cake in Saddleworth some of our other hardy members were fighting the elements in the Lakes on the Coniston Horseshoe Race (8.7miles,3494ft ascent). Conditions were described as wintery with snow, high winds and very low visibility making it a proper challenge for the runners. Sally Newman had a fantastic race placing 2nd lady overall (1.36.18) but did admit to being scared in the conditions as she battled the elements and found it hard going on the very slippery rocky route. Another great run from Jon Smith placed him 27th (1.27.41) with Lee Shimwell snapping sat his heels in 30th place in a time of 1.30.22. Karon Forster who’s coming back from injury had a good solid run in 146th place in a time of 1.55.58. 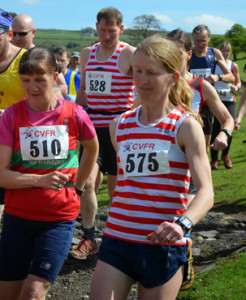 On Bank Holiday Monday, the popular Coiners Race (7.5miles, 1330ft ascent) was run once more out of Mytholmroyd. However, fun and games ensued with many leading runners forgetting that the route was changed last year to incorporate extra climb. In the monkey see, monkey do mindset that often takes hold mid race when adrenalin, race pressure and fatigue scramble even the best minds, many of the leading group tootled merrily on from Dick Lane towards Stoodley Pike, rather than dropping down to London Road. Twenty seven runners were thus disqualified leaving the marvellous outcome of a victory for a vet 60 category runner, the spritely Keith Holmes from Dark Peak. Closely followed by first lady in overall second place, Jordan Mullinger from Holmfirth Harriers. The rejuvenated Anne Johnson of Calder Valley was second lady in 11th overall, with Fiona Hall from Trawden in 12th.

On Tuesday night the week before at the local Orchan Rocks (3.4miles, 920ft ascent) race in Todmorden Alex Whittem had a ding dong of a battle with only 13 seconds separating him and Joe Crossfield as they crossed the finish line. Whittem just edged out his younger team mate to take the win. Mark O Connor was 5th and this sealed the team with Lee Shimwell taking the honours as 1st local home.