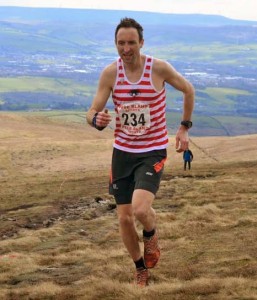 A barnstorming British championship fell race, held at Moelwyn near Blaenau Ffestiniog in north Wales saw Calder Valley’s men once again bag the team prize. Over the 10.5 mile 2799ft ascent mountainous course, it was no surprise that Calder’s silver bullet Ben Mounsey was again to the fore with another superb showing in 5th place.

However things could have been so much different had Ben been able to hold onto his lead after topping out after the first big climb in a stunning first place. But some poor route choices coming down and a lack of local knowledge cost him dear, hesitation proving costly among such a gilded field. It was Scottish ace, Findlay Wild who took advantage of Ben’s indecision to bag the win. Ben says, “I set off comfortably and worked my way the front and felt great. I started to push on the first climb and couldn’t believe it when I’d opened up a huge gap on the rest of the field. I kept the pace going all the way to the top of the first big climb and still had a good lead over Finlay Wild (winner) and Morgan Donnelly. Unfortunately I had no idea where the hell I was going off the top of the first climb and I started to lose chunks of time faffing over route choice.”

With several other of the top runners also struggling for their bearings (an occupational hazard of life at the head of the pack) Ben and a few others clubbed together to get themselves down the mountain, and then it was an every man for himself burst to the finish, a grandstand sprint ensued with a mere 80 seconds separating 2nd – 10th. Completing the placings for the victorious senior men were new signing and local Welsh maestro Math Roberts who came third, using local knowledge on these familiar hills, with the diminutive Tim Ellis in 7th. Gav Mulholland in 10th was the next team counter and in the form of his life took 3rd veteran 40 spot too. Darren Kay was the final counter for the seniors and with Mulholland, Shaun Godsman and Jason Williams they also took top spot for the vets.

First Calder lady home was Gayle Sugden, with captain Helen Buchan and Karon Foster not too far behind.