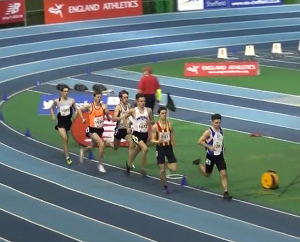 Max leading from the front

We normally see reports about muddy fell runners throwing themselves heroically down mountain sides in all the worst weather they can find…so it makes a change to report from an INDOOR running event held in Sheffield on the 1st March.In only his second full year of competition since converting to track athletics Max Wharton, coached by Calder Valley’s Mark Goldie has once again shown his world class potential. After representing Great Britain for the past few years in the world of Mountain Running he threw down the gauntlet on the track at the National Indoor Championships at the English Institute of sport in Sheffield.  Max demolished the competition in the heats on Saturday, winning his heat in 1:55.40 with another trademark front run in only his second Indoor track race.

The final on the Sunday was a closely contested affair, with favorite Spencer Thomas and Max battling it out, not only for a gold medal in the National U20 Championships, but a chance for the gold medalist to earn a coveted England vest at the Welsh International meeting this weekend in Cardiff.  Once again Max did all the hard work and led from the front, leading over the whole 4 laps of the 200m banked indoor track. He set a blistering pace as he wound up the lap times to keep the pressure on the rest of the field. But a split seconds loss of concentration by Wharton on the back straight, combined with good tactics from Thomas saw the Phoenix AC athlete move into first place as they hit the final banked curve. Wharton responded with a final effort but was narrowly beaten into second by an agonizing 0.11 sec in 1:52.35.

Not bad for an ex-mountain runner, and not the kind of margins we see in fell running. So after a brilliant win at the Northern Indoor Championships a few weeks ago at the same venue he is now second in the UK U20 rankings for 800m. The England selectors are watching this new kid on the block closely, and with the outdoor athletics season approaching they should see some more great performances.