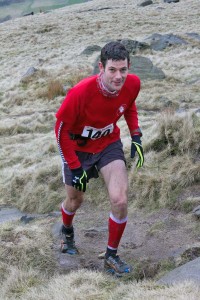 A real test of endurance was held last Saturday.  The 33 mile Haworth Hobble race starts in Haworth and was the first of the national Runfurther Ultra Championships and also the first race in Calder Valley’s Ultra Championship.  Calder’s Ian Symington won both Championships last year and the defending champion set off well on the route around the moors taking in Top Withens, Hurstwood Reservoir in Lancashire, Cross Stones, Stoodley Pike and Heptonstall before heading back via Haworth Old Road.

However club mate and 2014 Runfurther winning teammate Kevin Hoult was not prepared to let Ian take the lead again.  In a sprint finish for the line after 33 miles of racing Kevin finished in 3rd place a mere 20 seconds ahead of Ian in 4th in 4:22:02 and 4:22:23 respectively.  Kevin takes an early lead in the Calder Valley Ultra Championships.  The race was won by Chris Singleton of Trawden in 4:09:10.  Another of Calder’s distance demons, Simon Bourne was 10th in 4:45:20 and Martin Huddlestone was the 4th Calder runner to beat the 5 hour mark in 19th place and 4:56:00. If there had been a team prize the lads would have hobbled away with it!!!
The Women’s race was won by Bonnie Van Wilgenburg in 5:06:36 closely followed just over 30 seconds later by Dark Peak’s Nicky Spinks.  Calder’s only female representative, Linda Murgatroyd, came in 161st in 6:02:41.
One of the most enjoyable things about ultra races is the variety of food on offer at the checkpoints.  As well as the usual fare of cakes, donuts, and tea, also available at the Hobble were beer, curry and single malt whisky.  However it’s not clear if the front runners took full advantage of the offerings.
Other Calder runners included John Minta and Mark Wharton, both in training for the 60 mile Fellsman race held at the end of April.  Club Chairman, Bill Johnson was disappointed with his time, complaining that his legs weren’t working, never the less he still managed to complete in less than 6 hours.  However he fared better than Mark O’Conner, who, after keeping in with the front runners for the first 20 miles, suffered a massive attack of cramp in his hamstrings and calfs coming off Stoodley Pike and had to walk down to Hebden Bridge where he retired.  Adrian Shaw, Jonnie Watson and Jon Underwood all broke the 6:30 mark. Manhar Patel came in 241st place. He last ran the race ten years ago only 18 minutes quicker, proving that Calder Valley’s Ultra Fell Runners really have staying power.