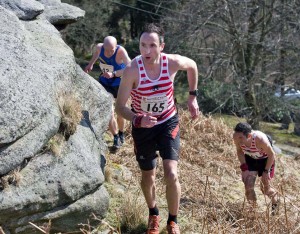 Calder Valley’s Ben Mounsey broke the course record whilst the Slightly Foxed Brewing Company took over as main sponsor of the 2015 Heptonstall Fell Race in what proved to be a vintage year. Clear blue skies and warm spring sunshine greeted visiting runners from across the region. Not with standing a chance to win free beer, numbers were further boosted by the local clubs opting to include the race in their club championships.

Now in its 5th year, the race began with runners receiving their traditional start-line blessing from the Rev Howard Pask in what has become a memorable feature of this community organised event. Calder Valley Search and Rescue team and Mytholmroyd Scouts along with 50 volunteers from the village were stationed around the 15 mile route as a large crowd cheered the runners out of the hill top village as they set off up Town Gate in blazing sunshine. 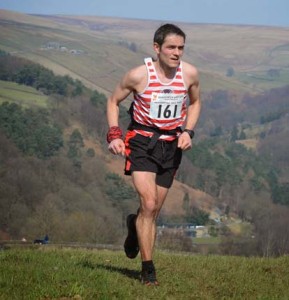 It was obvious from the outset that the 2015 race was going to be the best yet, as the likes of Calder Valley’s Karl Gray, Tim Ellis, Alex Whittem, Ben Mounsey, and James Logue, jostled for pole position along with Wharfedale’s Spencer Riley, Pudsey and Bramley’s Matthew Lockyer not to mention reigning course record holder, and twice winner Adam Osbourne of Leeds AC.

Descending from Standing Stone Hill, 3 miles in, Mounsey had taken a good lead over Gray and Osbourne before he was “slightly foxed” as to the best line down to Blake Dean. Taking a bad line cost the leader minutes that would not go unpunished in this top class field as Mounsey’s rivals capitalised on Calder Valley Captain’s error. Ben found himself off the route and forced to sprint down a track to re-join the race in 5th place.

The lead pack then fought a memorable battle of speed, wit, and endurance over the next 6 miles. Mounsey recovered on the big climb to Greave Height, then decided to work with Osbourne as the pair built a good lead climbing out on the path from Walshaw Dean over to Walshaw Farm, but as the race descended into Hardcastle Crags Mounsey’s poor route choice once again allowed Gray, Ellis and Riley back in the race. However Ben chose this moment to seize control, “I absolutely hammered the climb out of the woods and opened up a huge lead by Turn Hill and the descent back to Walshaw Farm. From there I never looked back. I put the hammer down on the ascent to Shackleton Knoll and really enjoyed the last 3 miles”. Mounsey arrived back in the village in an incredible 01:47:15, knocking a 7 minutes off the course record.

As proof of the dazzling array of talent on display, the next four runners also set times that were all inside the previous course record. Calder Valley’s Karl Gray (2nd) and Tim Ellis (4th) came in 01:48:59 and 01:50:45 respectively, either side of Wharfedale’s Spencer Riley (3rd in 01:49:25), whilst the 2013 and 2014 race winner and record holder, Adam Osbourne, found himself in 5th place in 01:52:48, despite having also beaten the his own course record. Karl Gray’s time set new V40 record for Heptonstall Fell Race 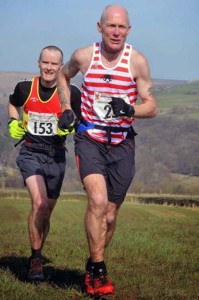 Richard on his way to V50 record. www.woodentops.org.uk 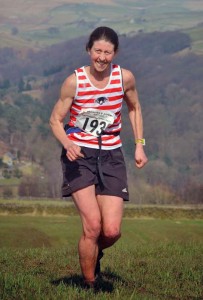 The event was organised by runners from Calder Valley and Todmorden Harriers, based in and around Heptonstall, with tremendous support from village residents. Heptonstall Hurriers, as they are otherwise known, came up with the idea of the race as means to showcase the village, support local businesses, and raise funds for local causes.

The event has gone from strength to strength, whilst helping to create a greater sense of community spirit in the village; seventy volunteers helped to marshal, provided free refreshments, and organised parking The Cross Inn acted race HQ to provide registration facilities whilst William Holt’s Greengrocers and The Bakehouse donated to the post-race catering. The event raised more than £1000 for St Thomas’s Church, Mytholmroyd Scouts, and Calder Valley Search and Rescue.