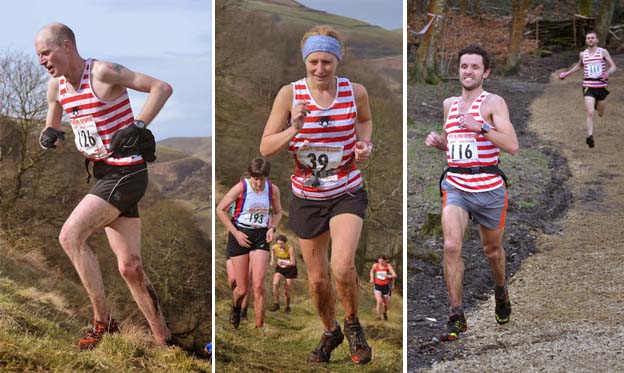 Staged in the usual expert fashion by Todmorden Harriers out of the splendid Todmorden Cricket Club, the race is a ‘Class A – Short race’, of 5.5miles and 1400ft. The tension before the race was palpable. Rather like a Hollywood night on the red carpet as the big names arrive one by one, the anticipation creeps steadily upwards as people clock who will be taking part. Bailey, Jebb, Donnelly, Hope, Addison – check; Wilkinson, Conway, McCormack, Rice – check. It was soon evident that the fields were of premium quality on this fine spring morning. But rather than Armani, Valentino or Dolce & Gabbana, it’s Inov8, Salomon and Ron Hill that these idols are clothed in, and as the sinewy throng of athletic brilliance took to the start line it was the ladies who got us underway first.

Upsetting the bookmakers who had Bingley’s Victoria Wilkinson down as a clear favourite, the Ambleside pairing of Annie Conway and Sarah McCormack again demonstrated the calibre of Lakeland clubs with a brilliant 1-2, beating Wilkinson into a distant third place. For Calder Valley, Gayle Sugden was first home in a superb 16th place, further showing that the mantle of top Calder lady now sits snugly atop her head. Gayle has gone from being good to very good of late and is regularly a major force to be reckoned with. The season holds no fear for her and she can look forward to an excellent year of achievement ahead. 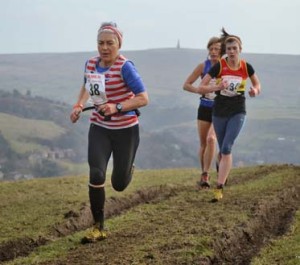 Sally on her way to 1st LV50. www.woodentops.org.uk

Not far behind were the bouncing bombshell herself, the indomitable Sally Newman, and super steady Jo Buckley in 21st & 22nd respectively with only a cigarette paper between them. With Gayle, this trio gave Calder second place in the ladies team event, an outstanding achievement behind such a fabled club as Ambleside. Close by in 26th was pocket rocket Lindsey Oldfield who continues to shine, the iron lady Jackie Scarf, barely out of breath in 58th, and further back Carolyn Shimwell and Sharon Godsman who kept each other company all the way round.

With the ladies race having whipped the crowd into a heady sense of excitement, the men took to the starting pen like a cast of strutting stags. It’s difficult to do the quality of the field justice and I can’t think of one big name who wasn’t there. In stark contrast, the quality of the field at Centre Vale continues to be a disgrace. The consistency of the main area of this once majestic park is now somewhere between the Somme, a bowl of cold porridge and Derby County’s Baseball Ground in the early 70s. With the added ingredient of having been shaken and stirred by the ladies’ race just prior, Wellington boots, rather than studded fell shoes may well have been more advisable.

Not, you may think, the best surface for local gun Ben Mounsey to execute his trademark bullet start. As regular readers will know, Ben has been in the form of his life and fancied his chances to win this race despite the luminous competition – a measure of just how far he has come as a fell runner since his epiphany from the tarmac. Undeterred, he belted out of the blocks and led the race out past the band stand like a scene from Benny Hill, round the field and to the foot of the big climb up to Todmorden Edge and Flower Scar. This ‘eyeballs out’ strategy usually suffices for Ben and another victor normally ensures, but it soon became clear that among this calibre of runner, plan B might be needed. 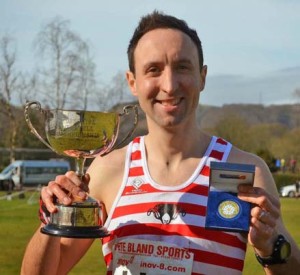 Ben picks up the story, “As the race progressed it soon became clear that trying to hang onto the coat tails of Simon Bailey was too tough a task, so I switched my aim of 1st to a top 5 finish and winning the Yorkshire Championship. As I watched Simon, Rob Hope and Rhys Findlay-Robinson slowly pull away I tagged onto the back of Tom Addison (who was in 5th) knowing that if I could stay with him to the top of the main climb I could pass him on the descent. As we climbed to the top I was in 6th place and when I looked back we had opened a big gap over Rob Jebb in 7th, so that gave me loads of confidence on the turn. As soon as we began to descend I got my breath back and attacked on the steepest section and then never looked back. I could hear Tom all the way behind me on the final climb but I knew so long as I got to the top of the final descent first I could beat Tom.

As the leaders fizzed past Eagle Crag, Simon Bailey of Mercia had by now established a sound lead, his extraordinary ability and Lou Ferrigno thighs powering him to eventual victory in 38.39, Rob Hope of Bingley and Morgan Donnelly of Borrowdale completing the top 3.

Ben duly held on and took 5th place and the Yorkshire Crown to go with his victory at Great Whernside last Autumn. In doing so he becomes only the third man to defend the title after Bob Whitfield (Kendal AC) in 1985, 86 & 87 and the venerated Ian Holmes (Bingley) in 2000 & 2001.

To finish 5th is a tremendous achievement for Ben and if you want to know what you need to do to do that in an English Championship race, here it is. Ben regularly puts in at least 65 miles, 8-10 hours and 8000ft of climb per week – astonishing figures – and along with his Elland based crew of crack Stravarati in Karl Gray, Gav Mulholland and Jonny Helliwell, they regularly churn out eye watering training stats. 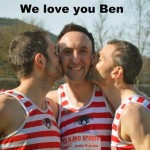 Gav and Karl were to the fore in 9th & 11th respectively and the top 25 was studded with Calder Valley. A reflection of the club’s astute transfer policy saw Welsh galactico Math Roberts debuting in a brilliant 7th place, the Foxey fella Jason Wilf Williams a dazzling 15th, Super Shaun Godsman in 19th, Stripey Ted Darren Kay in 21st, the Bard of Edgworth Tim Ellis 23rd, and Tod postie Alex Whittem a mere 25th! Such brilliant stats meant the team prize fell easily into Calder’s lap and the sense of mission accomplished was manifest for all involved.

To clean up in a race such as this with such a strong field, by my reckoning with proven race winners all the way down to 76th place (Ted Mason, Wharfedale), is one of the finest achievement yet for Calder Valley men. More of the same at the relays and Calder can really puff their chest out. The magic dust wore off on the rest of Calder with excellent runs coming from club champ Mark O’Connor in a lung busting 86th, Lee Shimwell proving that you can’t recce a route often enough in 122nd, and Mark Wharton flying round for one of the runs of the day in 152nd.

Buoyed by such a red letter day, the fun continued long into the glorious spring afternoon with the club decamping en masse to Tod’s White Hart pub, whose takings received a hefty shot in the arm, while the new signings received several hefty shots down the neck, as a thorough initiation ceremony ensued.