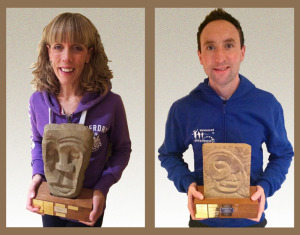 Another weekend, another consummate victory for Calder Valley’s Ben Mounsey. This time it was The Wadsworth Half Trog race, staged out of Lane Ends at Old Town above Hebden Bridge. Ben continued his blistering purple patch of recent weeks and smashed the record in the process, taking over three minutes off James Logue’s already swift time set last year.

One hundred and nine runners took the chance to enjoy the expert organisation of Calder’s Thirza Hyde, a club stalwart and dynamo, who was organising her last race after a long and worthy contribution to local fell running. In tandem with the excellent Hare & Hounds pub who hosted in style and generosity, the runners were treated to a peerless day’s racing set in perfect weather, the only drawback was the fact they had to slog across the mighty Midgley Moor for 9.5miles and 1500ft of climb.

Suitably sodden by two days of heavy rain, the Moor was in no mood to make life easy, but if anyone can make light work of such conditions its Ben ‘The Bullet’ Mounsey. However, with club mate and expert navigator James Logue in no mood to relinquish his crown, we were set fair for a keenly fought race. Ben was up to his usual tricks and blasted away in trademark style, up toward High Brown Knoll and beyond. It soon became clear that he was unstoppable. Combined with some canny midweek reconnaissance with local sat nav Mike Wardle, this ensured that Ben took the best lines from Ferney Lee Farm to the recently vandalised Sheepstones Trig point above Mount Skip, and then hit the afterburners for home.

The Trog is aptly named, with waterlogged ground, tactile tussocks and heather that grips your legs like a bull mastiff. What it lacks in climb it makes up for in tough underfoot running; throw in some deceptive nav choices and the changing complexion of the moor each year, then you have one of the calendar’s classic races.

In the ladies race, Gayle Sugden danced over the moor like a balletic pond skater to claim first place a superb 21st place overall, and along with Sally Newman (for whom it’s fair to say The Half Trog isn’t her favourite race!) and Gillian Wibsey ensured Calder ladies took the team prize. It was a clean sweep for the club as Mounsey, Logue and Royd Rocket Mark O’Connor combined to give the men the spoils.

Other notable runs came from local V60 Dave Beels, who can probably negotiate Midgley Moor blindfolded, carding a sound 22nd place, new Dad Jim Mosley in 36th , John Minta ran a superb 41st having flagged the full route the day before and Blair Garret and Andy Thorpe who had a right old tussle to finish 65th and 66th respectively. Similarly Andrew Meek and Tony Steward were only a place apart in 78th and 79th, and Dan Biggs knocked an amazing twenty-five minutes off his time from last year.

Well done to Calder Valley, Thirza and all her well drilled team of marshals and helpers for a splendid days’ running. 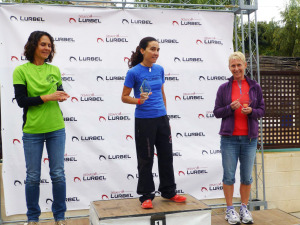 A Happy Podium place for Linda

Slightly further afield Calder’s globetrotting super woman Linda Murgatroyd took part in the Aitana-Puig Campana, a mountain endurance race staged from Finestrat near Alicante in Southern Spain. The Ultra race route is a vertiginous 85km and 5500m of climb (yes, you read that right). Linda, a ferrous-femme of remarkable fortitude loves this sort of stuff and despite an early setback, she girded her loins to finish 3rd female V40 in a mind boggling 15 hrs and 16 minutes and can be seen here astride the podium on the right.

Linda picks up the story for us, “I fell very early on in the race coming off the first hill at about 3 miles in and cut my knee, scraped my chin, nose and cheek bone. My knee was bleeding quite a lot but it didn’t hold me back. We then had a vertical kilometre climb to do which was a killer. After that the weather closed in and it rained and was overcast with some clag which was a God send as the previous day it had been nearly 20 degrees. Anyway I felt strong the whole way round and just kept going.” (…..and going).

If you want to get fit, enjoy the local countryside or just merely be inspired by ordinary people doing extra-ordinary things, then why not join us at www.cvfr.co.uk. We meet every Tuesday evening at 6:30pm at Mytholmroyd Community Centre, enjoy and good laugh and a beer and generally have a spiffing time. It really is good fun.