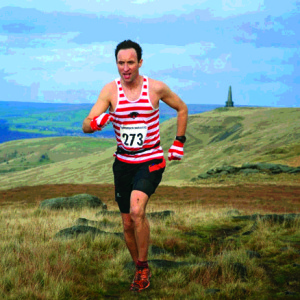 Each year the Shepherd’s Skyline fell race takes place on the Saturday before bonfire night and it starts and finishes near the Shepherd’s Rest pub on Lumbutts Road, high above Todmorden.  It’s one of the best local races in the fell running calendar and always attracts a large field of runners eager to test their speed and skill on this gruelling 10K course, so ‘parkin’ can often be a problem on the narrow roads around race HQ!

The race features a long undulating climb to Stoodley Pike following which runners endure a steep descent to London Road, before a long climb back up to the skyline precedes a fast breakneck descent to the finishing funnel.  The terrain is varied along the route with rocks as big as pumpkins to negotiate as well as bogs as sticky as toffee.

Calder Valley’s very own Ben Mounsey has been banging in the training miles recently and reaping the rewards with a number of sparkling performances.  With the recently crowned Yorkshire champion lining up against the in-form Alex Whittem and the never out-of-form James Logue, fireworks were definitely expected.

Ben set off like a rocket on the rocky footpath that works its way up to Stoodley Pike, leaving the other runners in his vapour trails.  Once Ben reached the imposing edifice of Stoodley Pike only misfortune could possibly stand in the way of another race victory… and so it proved with the Brooksbank bullet running away from the field to take the win. 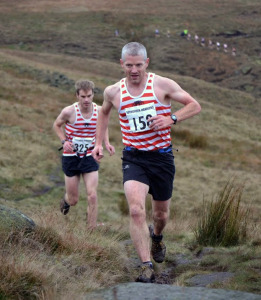 James and Alex do battle for 2nd place – www.woodentops.org.uk

James Logue, who teaches at Ryburn School in Sowerby, has excelled in this race in the past and the Ryburn rocket has an unerring ability to maintain a high cadence over the uneven ground, a skill which was good enough to secure Logue first veteran and second place overall.  Calder Valley made it a clean sweep in the team competition with local man Alex Whittem finishing third to record a Calder 1-2-3.

If Ben was the top Guy, then it was his Calder team mate Gayle Sugden who finished top of the pile in the women’s race to make this November fixture one to ‘remember, remember’. 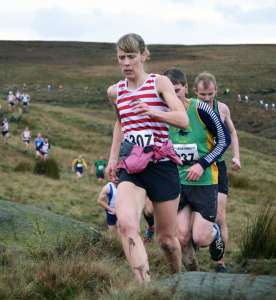 With a resurgent Anne Johnson in third and local lass Lindsey Oldfield in sixth the Calder club were able to plot their way to the team prizes.  Chorley’s Lynne Clough was second with the unattached Ali Keates and Pudsey’s Karen Pickles in fourth and fifth respectively.

There were great performances throughout with some notable pyrotechnics between Calder’s young stars Jack Denton and Martin Howard and the slightly older Stephen Smithies.  They finished high up the field in the low 20s, in consecutive positions and with less than a minute between them.