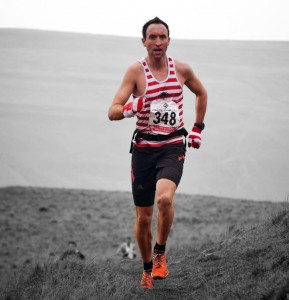 The Bullet in action as he climbs away to a health lead – www.woodentops.org.uk

As the fell running year approaches its final months, the keenly fought Yorkshire Championship is a title very much worth gunning for. ‘God’s Own County’ is often guilty of overbearing self-aggrandisement: world’s best fish and chips, best cup of tea, best cricket team, best pint of bitter, fastest ferret etc, but the county can lay claim to some of the country’s best fell runners. To bag the crown of Yorkshire Champion is very much a feather in one’s flat cap.

This year, Great Whernside was chosen as the deciding race, a winner takes all, four mile showdown up and down one third of the famous Yorkshire Three Peaks. Whereas Compo, Clegg & Foggy may have tackled this in a customised iron bath on wheels, with Bill Owen perhaps decked out in an antique diver’s suit for reasons based on nothing more than comedic effect, Saturday’s protagonists were more suitably attired.

Calder Valley sent three of their top guns, Ben Mounsey, Karl Gray and Gavin Mulholland in pursuit of the team prize, with a candid agreement between the three to go all out for the individual title. No F1-style team orders here, just all out racing, and boy what a race we had.

As the wind and rain set in for a gloriously bracing Yorkshire afternoon it was Ben Mounsey who got his tactics spot on. Not one to clutter his mind with complex race strategies, Ben settled on a simple policy of “go as fast as I chuffin’ can and hope nobody catches me” and he blasted out of the blocks in such incongruous fashion that he seemed like a 200m sprinter who’d wrongly turned up for a 1500m race. They don’t call him ‘Ben the ‘Bullet’ for nothing and he blazed toward the peak like a comet, the others vainly trailing in his wake. 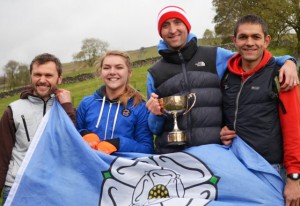 its bronze between Yorkshire gold – www.woodentops.org.uk

Ben, an Alpha-Stravarian who typically runs over 250km every month, has recently won the Half Yorkshireman marathon, set the fastest leg time at the Ian Hodgson Relay with chum Karl Gray and performed heroics at the British Relays. He is running as well as he ever has. Ben picks up the story, “My plan was to set off in trademark ‘bullet’ style and try to blow everyone away in the first mile. I did wonder if I’d gone too hard at the start but no one chased me down so I pressed on and kept stretching out a lead on the climb. I knew if I got to the top first then no one would beat me on the descent but I still didn’t want to get in a battle with Karl and Ted Mason (Wharfedale Harriers) as they are both renowned for their descending ability.”

Ben needn’t worry as he actually extended the gap between himself and the field during the descent, and romped home in 30:48 to be a comfortable winner by almost a minute – a tidy margin over such a short distance. Ben was understandably delighted with the win and joins an illustrious list of Yorkshiremen who have won the crown. Gav Mulholland and Karl Gray finished 3rd and 4th respectively to ensure the team prize.

Molly Traviss also had a super race and finished 3rd overall U23 female to claim a bronze medal. She can take great heart form this excellent result proving that the Traviss running genes are not exclusive to Garry and Brad. Molly looks set to go on to big things.

Lancashire Lightning Sally Newman was first placed FV50, but as all Lancastrians know when visiting Yorkshire, they don’t give you owt for nowt round here, and it was Bingley’s Ally Raw who claimed the crown.

Elsewhere in the field, Calder’s Blair Garrett put in another excellent run to come in 119th as he continues the good form he showed at Saddleworth, new signing John Killerby a solid 77th , and old pro Allan Greenwood and ladies’ skip Helen Buchan came in neck and neck to finish 102nd and 103rd respectively. Super Dave Culpan added another venue to his fell running global tour and has again run over thirty races this season.