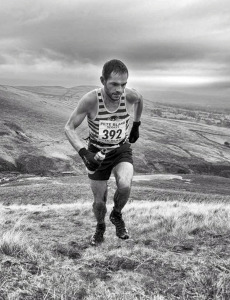 Calder Valley’s Karl Gray continued his fine run of form with a high profile victory at Saturday’s Tour of Pendle Fell Race. Even by fell-running standards this famous race across Pendle Hill and its surrounding moors is classed in the hardest of the hard, “Category  /Long” class, due to its extreme proportion of climbing over a seemingly endless 17 mile route.  Despite the summit of Pendle Hill itself being 1000 feet above the start line, the  ‘tour’ takes in a gruelling 5000 feet ascent arranged in five progressively sharper climbs separated by easier gradient boggy tracks. Some of Calder Valley’s toughest characters were out in force amongst the 372 finishers, including Ladies Captain Helen Buchan who was forced to drop out at Check Point 2 having been taken ill. Thick fog and rain added to the challenge, making for difficult navigation over the empty, and featureless moors. One runner in particular knows his way around Pendle blind-folded; Karl Gray emerged from the mist at the foot of the last and most severe climb in pole position with several runners hot on his heels. Pendle Hill’s “Big End” certainly creates a big and spectacular end to a relentless series of difficult ascents. Competitors are forced to scramble like beasts on all fours, so that only the strongest can keep a steady upward momentum; and so it proved for Gray, as he showed his class to press ahead of his nearest rivals, Wharfedale’s Ted Mason and Spencer Riley, before injecting devastating pace on the helter skelter descent back to the finish line in Barley to seize victory in 2.21.31. Richard Pattison had a superb run and is looking good for competing in V50s champs next year after his big birthday in January.