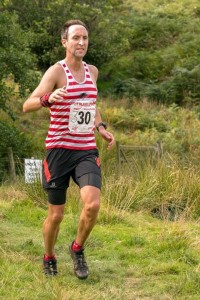 Yet another busy weekend of fell running involved two key events, namely the final English Championship counter of the season at Hodder Valley near Clitheroe, and the very popular Yorkshireman Off Road marathon out of Howarth.

Both attracted large fields, with the Hodder race being particularly blessed with elite runners as the cream of UK fell running lined up to do battle. Yet again, Karl Gray, for whom superlatives run short, put in a splendid run, finishing 7th overall, one place behind his main rival for the Vets 40 title, Bingley’s Ian Holmes, perhaps the finest fell runner of recent times. No shame them for Karl to agonisingly miss out on a medal by ten seconds. Gav Mulholland & Ben Mounsey, Calder’s Teaching Chuckle Brothers were 9th & 10th, star signing and looking like a barber’s shop pole in his matching red and white gear was Darren Kay in an impressive 12th, and super Dave Culpan ran superbly to hold off a clutch of Clayton and Bowland runners lower down the field. “Confirmation just in yesterday that the lads have won a open team bronze”.

The aforementioned Ben Mounsey was right back on it the day after with a blistering run to win the Yorkshireman half marathon. He romped home over six minutes ahead of his nearest rival and broke his own record in the process, and demonstrated that dedication, mileage and hard work is the way to the top. Roy Castle would have been proud.

In the ladies’ race, the bolt of lightning that is Gayle Sugden made light work of the moorland route with a brilliant sub 2 hour time and 12th overall. Gayle has been in prime form of late and this crowned some excellent performances in the second half of this year, plus it gives her full bragging rights in the Sugden household over husband Darren who finished 55th.

Just behind was leading Stravarian, Michael Dean, who is another exemplar of mileage and hard work, his 65th place and excellent 2:16 time further reward for his punishing schedule of late.

Lower down the field, the Three Amigos Graham Davy, Carolyn Shimwell and debutant Liz Lloyd can be delighted with their respective runs, with Liz in particular taking great credit from her sub-three hour time, scraping in under that marker by three seconds. 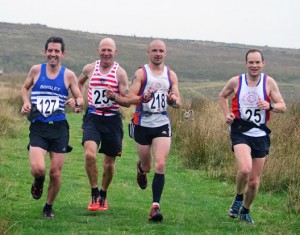 In the full marathon event itself, King of the Kilometres, Kevin Hoult carded a superb 7th place in the solo category. A marathon is a mere soupcon for Kevin, who is part human, part machine and part dynamo, his Krypton Core rarely needing recharging. Recent signing Richard “Postie” Pattinson, another man who like the miles, ran a superb race with his partner as they took the honours as first pair home over the finishing line.

Overseas, and Heptonstall’s young star Max Wharton was part of the Under 20s GB team who took Bronze in World Mountain Running Championships in Italy. Max ran a good race himself, coming in 28th overall but you know you’re in a strong field when there’s some Kenyans in there, and it was Phillip Kipyeko who took gold. Max can take great heart from his season so far as he continues to make excellent progress.