Loving known as “The Ben” and described as the oldest, toughest, most iconic race & a supreme “test” of fitness Britain’s highest mountain lures runners from all over the country on the first weekend of September. With the “scirle” of the pipes resounding in the misty Scottish air the runners set off round Town Park, along a mile of “flattish” road then its up for 4400 feet and almost 4 miles to the summit of the mountain. The runners retrace their steps down the steep rocky descent. With very tired legs that “flattish” road mile doesn’t seem very flat anymore. It’s a welcome site to all to re-enter the park and see that finish funnel.  Seven Calder Valley members travelled across the border and passed “the test”. Some people will do anything for a free drink of whisky!! On his debut “Ben” Joe Washington ran very well to place 33rd in a time of 1hr 51 mins. He was followed five minute later by veteran Steve Smithies who is finding some form after a steady come back from knee surgery. Mark O’Connor just sneaked in the top third of the field in a time of 2hr 10mins followed by his team mates Ben Frechette (2hr 18mins), Dave Hammond (2hr 34mins), Trevor Murgatroyd (2hr 51mins) and Dave Culpan (2hr 52mins). CVFR hope to put this iconic race in their club championships next year … watch our Fort Bill “The Where’s Walley” are invading!!!! 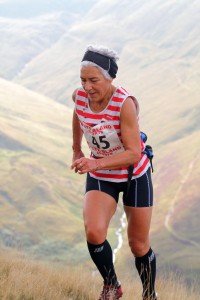 With her recent permanent move up north Sally Newman has wasted no time in getting on those fells racing most weekends. In her recent outing to Shelf Moor near Glossop the veteran super star placed a great second only 3 minutes adrift of international mountain runner Sarah Turnstall of Kendal AC. Jon Smith also ran very well indeed to place 10th overall in a time of 50 mins 24 sec less than 5 minutes adrift of the winner Mike Fanning of Borrowdale Fell Runners. Karon Foster, Michael Dean and Andy Thorpe were the only other CVFR racing that day and they placed 49th, 55th and 75th respectively.

Helen romping through the heather

On the same day club captain Helen Buchan and young fell star Joe Crossfield took on the Totley Exterminator. This race is approximately 26k but with your own route choice this can be slightly longer or shorter. Joe was in the leading group but lost sight of the first runner in the man eating 7 foot ferns and unfortunatey went left when he should have taken a right turn. He had to regain a lot of height that he lost but ran well over the longer distance to take 7th place in 2hrs 27mins. Helen was on for a win on this one of her favourite races but with local knowledge runners from Totley taking a different faster line to her she eventually finished in 3rd place in a time just over 3 hours but less than 2 minutes behind the 1st lady home.