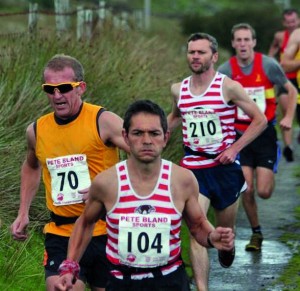 Karl working hard for his 5th place and bronze medal

The final medium counting race in the 2014 British Fellrunning Championships took place at the Maesgwm Mudddle on Saturday and Pudsey and Bramley’s Rob Hope and Bingley Harrier’s Victoria Wilkinson confirmed their champion status in the most emphatic way possible with both of them winning this testing race in Wales.  Calder Valley’s Karl Gray took fifth place at the Muddle and he continues to perplex his clubmates with his age defying performances as he picked up another V40 medal in the overall series. The silver medal was tantalisingly within reach at the start of the race for Gray, but Morgan Donnelly of Borrowdale grinned all the way to the finish line as he came second in the race to close out on second place in the series.  Usual suspect Simon Bailey of Mercia flexed his considerable quadriceps to finish in third place on the day.  In the Women’s race, Carnethy’s Jasmin Paris finished the race and the championship strongly and nearly local lady Helen Berry of Holmfirth capped off a wonderful season with second and third places respectively.

There was a notable run from Calders’s man of mischief Gavin Mulholland who just managed to squeeze into the top ten. Mulholland is one of fell running’s fastest climbers and the brutal 2,200 feet that made up the first climb put the elf-framed Calder man into one of the leading positions, from which he gave no quarter. There were some fine performances throughout the field from Calder Valley: Three men who made their ‘mark’ were Mark Goldie, Mark O’Connor and Mark Wharton and for the women Captain Fantastic Helen Buchan and her clubmate Karon Forster also had fine runs. 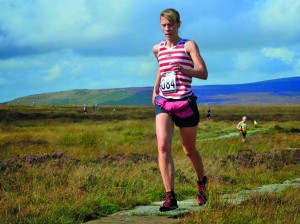 At the Blackshaw Head Fell Race Calder Valley were out in force and they took bragging rights over their neighbours down the valley, Todmorden Harriers. Calder held the first three men’s positions with Alex Whittem just overtaking Max Wharton on the climb back into the Fete show field to successfully defend last year’s title. Joe Crossfield eased into the finish field, just glancing over his shoulder to make sure he’d outkicked Tod’s Nick Barber to make the final podium place. There were also top ten finishes for Calder Valley’s Adam Breaks, Ian Symington and James Williams. In the V60 category Calder’s Brian Horsley was just beaten by Harry Atkinson of Bingley, by less than the length of the Fete’s tug of war rope.

In the blustery conditions the resurgent force that is Gayle Sugden blew away the rest of the field in the Women’s race, but it’s been a tremendous first season for second placed Lindsay Oldfield running for the mighty rams. Unattached Molly Heitz was the only podium placed runner outwith the Calder club. 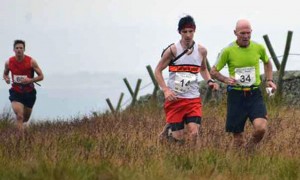 One of Calder Valley’s members, John Lloyd, has recently taken the bold step of organising races as a full time job and a healthy number of runners turned out at the inaugural running of his Pendle Three Peaks Fell Race.  The route is a clockwise jaunt around three of the biggest hills in the area, including Pendle Hill of course, and it features fast Pennine running over nine miles, with nearly 3000 feet of rise and fall.

The area is famous for witches whose favoured mode of transport is the broomstick, and it was Pudsey Postman (A recent Calder signing!!!) Richard Pattinson who swept to victory holding off Chris Holdsworth from Clayton le Moors. Calder’s Joe Washington was the sole Calder representative and he was once again in fine fettle with another podium finish in third place. The evergreen Lynne Clough of Chorley was the first woman.