Summer time in the fell running calendar means an assortment of all kinds of races from Lakeland multi-mile epics to short-hop, up and down BOFRA races, often held at local shows and galas in the Yorkshire Dales. 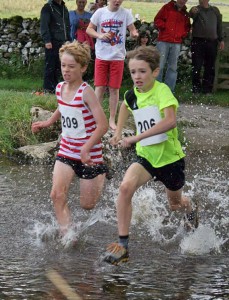 The Malham race is a favourite in the British open Fell Running (BOFRA) calendar and the short burst is a keenly fought contest. Calder Valley’s Iain Glendinning put in one of his best races yet to come in 6th place, rubbing shoulders with some of the short distance specialists. Even better, young James Duffy showed his skills by winning his under 9 years junior race and he is no doubt set for great things in a red and white vest.

Nearby at Arniston, Alex Whittem showed why he is such a complete fell runner with an excellent second place. Alex, a mere slip of a lad, is at home in races of all distances, and has had a commanding season across races short and long, and he’s no slouch as a triathlete either. 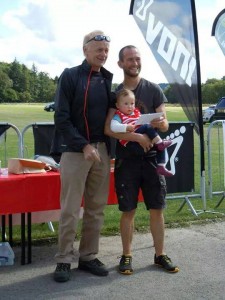 Ian being presented with his prize from the legend Billy Bland

In the longer stuff, the Tour of Skiddaw is a hefty test of running, covering 44 miles and 7100ft of climb over a corner of England that has recently changed hands. Doing smart business on Saturday was the Don of Distance himself, Ian Symington. Ian has run so may miles this year he must be due an MOT, but fell agonisingly short of the coveted win with a strong second place. There maybe some comfort that his time was a full 25 minutes faster than the previous record. Ian led the race at several points, but in another piece of poor luck, who has had a string of excellent second places this year, ultra specialist Charlie Sharpe chose to compete and took the victory eight minutes ahead of Ian.