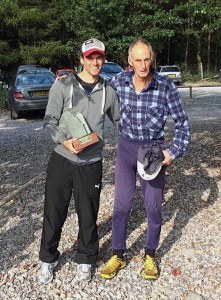 It was a quiet weekend’s fell racing for Calder Valley’s thriving membership, although it did still bring a national trophy to one of the club’s newish recruits: Joe Washington, a physiotherapist based in Ripponden goes about his profession in a quiet, but confident and determined manner and he has brought those attributes to his burgeoning fell running career with the national King of the Mountains trophy. The trophy is awarded for the highest placed aggregate position in the three countries of Great Britain’s highest mountain races: Ben Nevis, Snowdon and Scafell Pike.  With ‘The Ben’ and Snowdon attracting international mountain runners, Joe’s 33rd placing in Scotland, 31st in Wales and a very fine second placed position in England’s Scafell Pike race on Saturday earned Washington the coveted trophy. Lindsay Brindle from Horwich has had a fine year on the fells and she collected the equivalent trophy for the women. Joe, a former footballer of some pedigree, was beaten by a resurgent George Crayston. The Cumbria farmer was one of fell running’s brightest talents ten years ago, but he sacrificed his fell running talent for rugby league, playing for Egremont.  Crayston, is an unusual sight in fell running because unlike most of his skeletal rivals, he’s all beef and brawn from his rugby days, but this doesn’t seem to hold him back, even on the climbs. Joe received his second place prize with a warm handshake from another farming and fell running legend, iron man Joss Naylor. 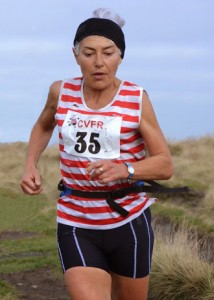 If Sally Newman continues for a few more decades she’ll no doubt be referred to in the same hallowed terms as Joss himself. The indefatigable Newman won yet another race outright taking first women’s place at Lantern Pike. Not bad for a V50.  For the men Simon Bailey outkicked Rob Little and Lloyd Taggart to take the win.  Brian Horsley and Trevor Murgatroyd also ran for Calder Valley in this short peak district race.