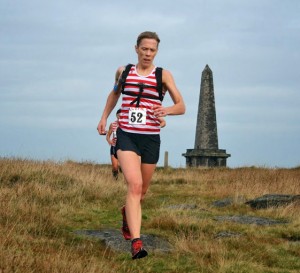 Calder Valley’s Gayle Sugden was the star performer at the Good Shepherd Fell Race on Saturday, setting a new lady’s course record as the race celebrated its 10th anniversary.

Fine autumn sunshine blessed this year’s race rewarding the efforts of Calder Valley’s Steve Woodhead. Steve has helped secure the future of the event since taking over the organisation of the race. The best entry since 2007 saw 106 runners make their way to Mytholmroyd on Saturday morning for this local classic. The race has reputation for leaving the badly prepared to wander lost and bewildered across empty hill sides. Covering a lung-busting 14 miles of moorland, including 2 tough ascents of Stoodley Pike, this year’s race once again turned on navigation errors at the front of the field.

Starting out from Dauber Bridge in Cragg Vale, the Shepherd’s flock made the first big ascent towards Stoodley Pike, Withins Reservoir, and the un-flagged, navigational sections across Withins Moor. 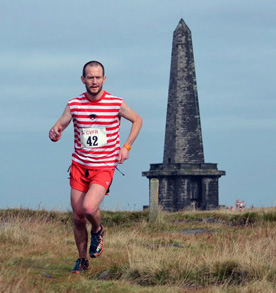 The turning point of the race proved to be the tussock fields above Withen’s Reservoir, where the lead runner’s lost vital time, allowing unattached Oliver Barnes to enter the fray. Valley’s Ian Symington, and Mark O’Connor, gained places along with Tod’s dread-locked Chris Godard who put his detailed knowledge of the local trods to good use to edge past Graeme Brown.

The rest of field filtered back having enjoyed yet another great day out on the South Pennine moors, to be greeted by volunteers offering warm soup and drinks.