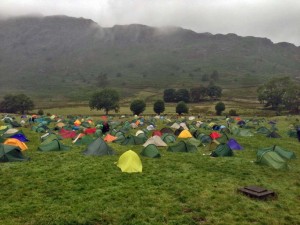 Now where did I leave my Terra Nova Laser Comp?!

Club chairman Bill Johnson claimed a brilliant 3rd place at the recent Saunders Lakeland Mountain Marathon. This annual event was staged in the Deepdale area of the Lake District this year (it changes each year), where entrants have the choice of various classes of growing difficulty, with entrance to each class dependent on your skill and experience.

Bill was in the KLETS class, the toughest of the lot, the acronym standing for Ken Ledward Equipment Testing Services. A weird name you may think but Ken was an early pioneer of such events, a mountain guru and his eponymous company does just that, it tests equipment in the field to the nth degree, and it is highly likely that your base layer, your Gore-Tex jacket, or your rucksack has been put through the mill by Ken and his team during its product development stage.

Bill, part human, part GPS navigating droid and part mountain goat is the perfect composite for such an event and demonstrated his renowned Lakeland prowess with a brilliant day one, finding all fifteen controls in the superb time of 5hrs 23 mins. He was back at overnight camp at Steel End Farm (rumoured to be Gavin Bland’s farm) having barely broken sweat and was tucking into his Pot Noodle long before the bulk of the other competitors showed up. 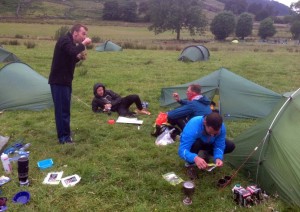 No doubt looking forward to a restful night with an improving book, he must have been dismayed to see the Carrock Fell Class group from CVFR comprising Iain Glendinning, Ben Frechette, Jim Mosley, Iain Powell, Richard Ingram, Jake Ackroyd, Gavin Roper and Nathan Kennaugh come bowling into camp as if on a Duke of Edinburgh jaunt. But fear not, the bonhomie around the tents was of the highest order, and despite a rather ambitious Fosters lager order, the chat and post mortems of a particularly gruelling day one gave rise to some fascinating insights.

Special mention must go to Iain Glendinning and Richard Ingram, whose new Inov8 X Talons had disintegrated early on, and they had manfully soldiered on for another 5 hours or so. The shoes didn’t merely split, they fell apart, not perhaps what you expect from £90 of your hard earned. Further distinction must also go to anyone who had the misfortune to sleep within a hundred yard radius of Nathan Kennaugh’s tent. Nathan produced a display of industrial scale snoring not witnessed in the Lake District for many years. It was akin to sleeping on the main runway at Farnborough Airshow, and poor Bill had to suffer the aural bombardment for hours.

But undeterred, Bill rose bright and early, folded his tent and belongings into a small parcel that a Japanese origami specialist would’ve been proud of, and disappeared into the distance. He put in another fantastic day’s running and map work to cement his outstanding third place.

Day two was pretty much a reverse of day 1, with a traverse back over Helvellyn, collecting controls from some of the other classes, and then heading back to Patterdale for a well-earned bangers and mash. … Here’s what Bill had to say about it…..

“In the Klets you have to go to all the checkpoints, but in any order. I was happy with my route choice: one of the big decisions on day 1 was whether to go up and over Helvellyn or contour round the slopes. I knew the slopes are horrible so gritted my teeth and did the big climb over instead, as a consequence overtaking one of the favourites, England International orienteer Lewis Taylor, who took 20 minutes longer doing the contour.

I was the first of the Klets competitors into the overnight camp, although two more top orienteers (Scott Collier who was my favourite for the win, and David Alcock) who started later than me posted faster times, so I was third overnight.

On day two I was in the chasing start: everyone within 45 minutes of the overnight leader starts in time order, before the rest of the field. By the second control on day two I had overtaken Scott Collier in the mist without realising it (he’d overshot the control). The other runner in front, David Alcock took the controls in a different order to me, and through that route choice I moved past him (again without realising it). However Lewis Taylor came past me on the slopes of Fairfield. I hung on to him for a bit but he was too quick for me and I had to let him go ahead and concentrate on my own race. For the rest of the day I thought I was 4th but I was actually 2nd.

Towards the end, getting tired, I messed up one of the final controls and lost 10 minutes having to go back for it. As I was doing so David Alcock came back past me. I was reeling him in on the descent from there to the finish but not enough to catch him. So it finished: Lewis Taylor first, David Alcock 2nd and me 3rd. Overnight leader Scott Collier was 5th.

Interestingly, of the top six finishers on the Klets, there were all top orienteers apart from me.”

Starting and finishing in Patterdale, the overnight camp was at Gavin Bland’s farm Steel End near Dunmail Raise. It took in Birks, Glenridding, Raise, Helvellyn, Nethermost Pike, Dollywagon Pike and Grisedale Tarn on day one. Day two was on the slopes of Dollywagon, Fairfield, Great Rigg, St Sunday Crag, Hart Crag and Hartsop.

It was good fun at the overnight camp, with Ben, Iain, Jim, other Iain, Nathan, Gavin, Bert, Jake and me all camped together, exchanging tales of the first day.” (He’s far too polite as he never mentioned the snoring).

In the Carrock Class, the aforementioned CVFR group all put in in more than respectable performances, namely Iain Glendinning & Ben Frechette who came 17th. In the Pillar Class, the returning Steve Smithies confounded his critics who sneer at his oft derided navigation, with an impressive 15th place in the Pillar Class. Well done Steve and let’s hope this silences the naysayers once and for all about your map reading!

For more detail and insight into the event go to www.slmm.org.uk 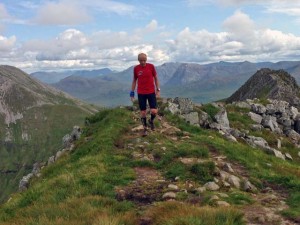 Bill making his way in a stunning day

And Bill on the back of his success at The Saunders decided to give the Tranter Round a go and was successful in completing it last Monday with support from John Minta, who almost completed it himself but had a slight mishap when he fell. (OMM elite watch out these 2 are coming to get you!!!) Tranters route is 40 miles with 20000′ by Bill’s measurements (and who would ever disagree with Bills Maths!!). Completed by Philip Tranter in 1964, the route consists of: Ben Nevis, over the arete to Carn Mor Dearg, Aonach Mor and Aonach Beag (so that’s four out of the ten highest mountains in the UK!) and then the four munros of the Grey Corries to Stob Ban at the eastern end. Down and across the glen to do all ten of the Mamores, from Sgurr Eilde Mor to Mullach nan Coirean. Then a long descent to the starting point – the Glen Nevis Youth Hostel. The Mamores used to consist of 11 munros but Sgor an Iubhair was demoted some years ago for not having quite enough reascent between it and the nearest other mountain. So while the round used to consist of 19 munros it now consists of 18 munros and one top! 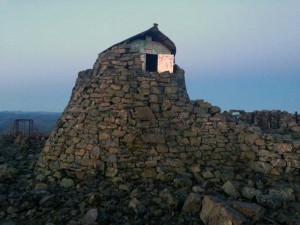 The shelter on “The Ben”

It can be done clockwise or anti-clockwise (but the latter means coming down from the Ben at the end!) and what Bill said about the day …“The Tranters Round on Monday was one of those days that will stay with me forever – beautiful sunrise as we got to the top of Ben Nevis, glorious weather for almost the whole day so that you could see for miles and a superb route in imperious mountains.” Well done Bill.