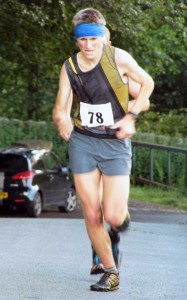 Joe with eventual winner Darren hot on his heels @ Widdop

With Calder Valley Fell Runners enjoying a boom in membership there was a plethora of red and white vests in the hills and mountains on one of the busiest fell and mountain running weekends of the year.

Some of those runners warmed up for the weekend at Widdop, a cracking seven mile race in the windswept wilderness of Widdop Moor high above Hebden Bridge.  The race has been organised by one of the club’s most popular members Andy Clarke, who though now semi-retired from competing, still has enough enthusiasm for fell running to put on a great race each year.

One of the club’s burgeoning talents, Joe Crossfield, was narrowly beaten into second place by seasoned veteran campaigner Darren Kay, with CVFR’s Alex Whittem coming home in fourth place. The genial postman is only slightly off the pace following the recent delivery of a special package in the Whittem household, a baby girl . Other notable performances came from Dave Beels, who continues to belie his years with a fine run to take first V60 and from Lindsay Oldfield who was second female. Lindsay, who is the daughter of Steve Oldfield, is proof in person that running talent does indeed run in the family, although Lindsay was only just beaten by an in-form Lucy Collins of Stainland Lions.

Saturday also saw many Calder runners land in Llanberis for the International Snowdon Mountain Race, which on any other day takes runners up and down the well trodden tourist path for a lightening quick visit of the highest summit in England and Wales. On this occasion, it was the risk of a bolt from the blue that saw the race organisers cut short the race route.  Perennial race winner Andi Jones said goodbye to the race for a while as the marathon man moves to a new job in Qatar and to many people’s surprise, he didn’t celebrate a seventh victory in the country where so many share his surname.  The wily Italians Cesare Maistri (first) , Erik Rosaire (second) and Paolo Gallo (fourth) were just too proficient on the technical descent; these men in blue bolted past the roadrunner to claim three of the top four places. Irishman Tim O’Donoghue was third and Borrowdale man Morgan Donnelly was first Englishman in fifth, just one place ahead of Jones.

It wasn’t long before Calder’s runners started to come crashing down the mountain and into the finish field as Gavin Mulholland, who was representing Northern Ireland for the third year in a row finished in 23rd, with Joe Washington and Johnny Helliwell not far behind in 31st and 32nd.  The subtitles of Welsh TV channel S4C which was covering the race, proclaimed the tattooed Stainland man as looking like an “escaped convict”.  Not sure about that, but what is certain is that both he and Washington ran with conviction to post impressive times in this race of international all-stars. Ireland’s Sarah McCormack was clear winner in the women’s race from orienteer Tessa Hill and Italy’s Elise Compagnoni, who were second and third respectively. Calder’s Holly Page took a leaf out of the book of other Calder greats from the recent past and ran in an England vest to finish in seventh place in the Women’s race. She even managed to finish one place ahead of one of the greats of fell running, Pippa Maddams, a truly outstanding effort by the Blackshaw Head based runner.

Snowdon also staged the uphill and invitation only ‘Snowdon Super Cup’ which was won by James Walsh.  The partisan local crowd were hoping to celebrate a Welsh champion, but in the end they had to settle for a ‘Walsh’ runner as the Leeds City man beat Snowdonia’s Rob Samuel into second place. Calder’s Joe Crossfield was twelth and second U23 just ahead of first woman and sponsored athlete Emma Clayton of Bingley Harriers, who has made a remarkable return to racing following a broken foot injury last year. 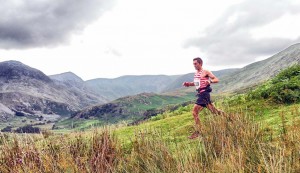 Finally, there was just the small matter of an English Championship Race at the Kentmere Horseshoe Fell Race in the Lake District on Sunday to complete the round up. While Rory McIlroy was celebrating a victory in the British Open, the equally precocious talent of Tom Addison will soon be crowned national fell running champion if he can put in a reasonable show at the long counting Sedbergh Hills.

What hasn’t been written about Karl Gray? At 44 years old he’s still Calderdale’s best runner and for twelve years he’s improved year on year as third place in this race caps off another imperious year for Calder’s George Clooney.  Karl was only just beaten by Rob Hope, who will now be crowned V40 champion. Calder’s Ben Mounsey showed he could be the man to assume the Calder mantle if age ever does start to catch up with Gray, with the Brighouse teacher coming home in a cracking ninth place. With Tim Ellis in 11th and Shaun Godsman in 19th and  Alex Whittem paying for an overcooked start in 47th, it still an impressive show from Calder’s men.  Holmfirth’s Helen Berry led the charge for the women, from Mercia’s Mel Price and Dark Peak’s Judith Jepson. Karon Forster was the solo Calder woman to race.

At Holme Moss, the name made famous for its long road climb in the Tour De France, Calder’s Rob White had a great run to place 19th and 1st under 23 in this testing long race in a time of 3 hours 28 minutes. Phil Scarf was 34th overall in a time of 3 hours 44 minutes and hot on his heels and less than a minute behind him was women’s captain Helen Buchan. After a few weeks off from racing she took 2nd ladies spot and was well pleased with her run. And not to be outdone Jackie Scarf raced in around the 4 hour mark and took the 1st women over 50s prize.