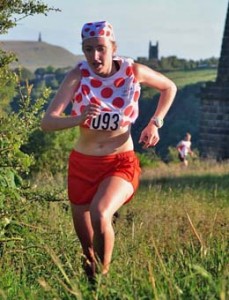 Holly on her way to breaking the record in “Le Tour” style – www.woodentops.org.uk

Gray, tackling the race for the first time, sped round in 49 mins 37 seconds, smashing Christopher Smale previous best of 52:09 set in 2012. Joe Washington made it a 1-2 for Calder Valley with Richard Meade, an elite marathon runner who was part of a contingent of runners from Edinburgh in the area for the bike race, third. All three beat the previous record of Smale, who was 12th this time. Page came ninth of the 94 runners and won the women’s race for the third year in a row. Her time of 54:58 bettered the 55:42 of Holmfirth international runner Katie Walshaw in 2011.

The race was a club championship counter for Calder Valley and Gray, who is used to  scaling The Three Peaks with the minim of fuss, remarked how tough the course had been. The route, which has more than 1,600 feet of ascent, starts in the hilltop village and plunges deep into a neighbouring valley before finding its way to the top of a nearby peak.  It returns in similar fashion and there is a mixture of terrain with cobbles, grassy fields, muddy slopes, rocky bridleway and open moorland, some of it pathless.

That test wasn’t enough for Sikobe Litaba who ran approximately 30 miles from Glossop before taking part and still beating a dozen rivals home. Organiser Steve Grimley of Heptonstall Hurriers and Calder Valley FR put the record times down to perfect conditions and slightly cooler temperatures due to the evening start. He said it had been a real community event with 30 volunteers from the village acting as route marshals and others providing French-themed food. The village had been decked in bunting and numerous campers had added to an “amazing buzz” surrounding bike race weekend. The event raises money for the Heptonstall Festival later in the year.

Holly Page was making it two course records in four days at Heptonstall, having demonstrated she was in top form in the Cragg Vale Fell Race. She was seventh overall in a four mile race which started at the Hinchliffe Arms and attracted 112 runners. Page clocked 31:07 behind winner Jamie Parkinson (Pudsey and Bramley AC, 27:00).