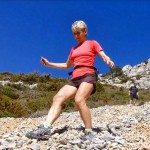 Veteran Calder Valley Fell Runner Karl Gray was right on the money this weekend with another marvellous run at the Dollar Fell race in Scotland, which is the latest British championship counter in the annual three from four race series. Gray is looking to cash in on his peak fitness and make another mark by bagging yet more silverware in both the Open and V40 categories.   Andrew Fallas currently sits atop the standings with the in-form and now 40 year old Pudsey and Bramley man Rob Hope in second place. Borrowdale Vet Morgan Donelley has now moved slightly ahead of Gray in both the Open and Veteran categores, but if Gray can outfox the Borowdale man at the final counting race, the ‘Maesgm Muddle’ and with weather and route choice such critical factors in fell running there’s still every chance the alchemist Gray could be celebrating turning a nailed on bronze medal into a silver one. The irrespressible Simon Bailey once again won a race he was on the start line of, but Hector Haines of the irreverently named Hunter’s Bog Trotters running club pushed him all the way, finishing only seconds behind. Rob Hope was third, with Morgan Donelly seventh and Karl Gray ninth. In the Women’s race, Victoria Wilkinson of Bingley Harriers continues to dominate the British championships, but Jackie Lee of Eryri Harriers is in the form of her life and took a close second from Jasmin Paris of Carnethy. Finally, Tim Ellis had a fine run to finish in 31st place and Karon Forster and Rod Sutcliffe were only seconds apart, coming home well under the two hour mark.

Stainland’s Linda Murgatroyd continues to enhance her iron woman reputation with first mixed team in the eye-watering and will-shattering Lakeland 10 challenge. The race takes in ten of the Lake District’s signature peaks, with 5600 metres of climbing over 73 kilometres. Murgatroyd and partner Ian Haigh were out in the hills for 19 hours of continuous peak bagging in this Herculean hill challenge. (read Linda’s report here)

At the other end of the fell running spectrum and in less time that it took Linda Murgatroyd to pack her bag for the Lakeland 10, Joe Washington was also romping up and down the hills of Cumbria at Kirkby Gala Fell Race. Washington posted a well earned fourth place, with Wharfedale’s Ted Mason winning another race in the British Open Fell Running Association series