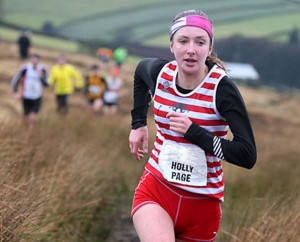 Calder Valley FR’s Holly Page put most of the men in their place with a stunning run at Saturday’s Turnslack Fell Race, organised by local running legend Kev Shand.

In very hot, dry conditions, Page finished third overall and her victims included talented clubmate Joe Washington, who unfortunately missed one of the flags and was one of several in the 62-strong field to go off course. Calder Valley won both the men’s and women’s team prizes.

The runners set off up the hill from Calderbrook Church, Littleborough in the mid-afternoon heat. The route runs off along the main path to Watergrove Reservoir, before branching off over the moor which leads to an up and down of Hades Hill followed by a hard push on the long ridge to Trough Edge End with two tough climbs then approaching in quick succession. The last climb was up a path through very deep grass. The surprised winner John Green from Preston Harriers, came home in 1 hr 20 mins 41 secs. West Pennine’s Neil Holding was second with Page little more than a minute behind the winner and more than 14 minutes in front of the next female, club mate Karon Forester in 23rd. Jackie Scarf (25th) completed Calder’s winning team.

The club’s successful men’s line-up was Mark O’Connor in fourth, Steve Smithies in eighth and Dave Beels in 11th. Phil Scarf would probably have been in the top 10 and first V50 runner had he not gone astray. Shand’s prize giving was as quirky as ever with Page getting the prize of the day, a toasted sandwich maker, and Jackie Scarf getting the legendary toilet roll for second V50. 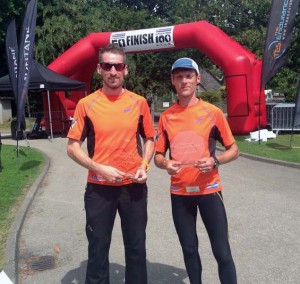 Up in the Lake District, Calder Valley’s long distance runners took on the immense challenge of the Lakeland 100 and 50 races.  Ian Symington, Simon Bourne and Kevin Hoult tackled the ‘100’ which was actually 105 miles. The ultra-marathon endurance specialists set off at 6pm on Friday evening in very hot conditions. Symington was going well in the top five until having to withdraw due to sickness  in  the early hours of the morning after 50 miles.

Bourne and Holt ran the first five miles together before Bourne pulled away on the first big descent. The next time Holt saw his clubmate was 95miles later and they covered the last five miles together for joint 14th place out of 304 entrants in 26hours and 8mins. Only 190 finished and the winner was  Scottish elite mountain runner Marco Consani in 21:14:52.

In the ‘softer option’, the 50-miler, Tod Harriers’ men’s captain Nick Barber teamed up with John Lloyd of Calder Valley to form Team Cannonball. They suffered in the heat but didn’t consider giving up and finished winners, having targeted this race following a close second at the Howarth Hobble earlier in the year. Barber’s time was 10.14.00 and Lloyd was only three second behind him.