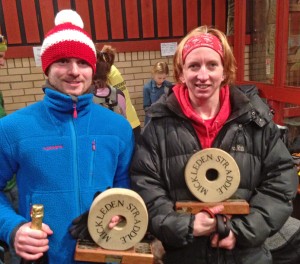 There was double delight for Calder Valley on Sunday as Tim Ellis and Helen Fines repeated their success of twelve months ago with victories in the Mickleden Straddle fell race. Set in the delightful High Peak countryside about half way between Huddersfield and Sheffield, the race was blessed with crisp winter sunshine, albeit in parky conditions.

The 14 mile/2431ft race is a punishing mix of trail, fell and cross country and sets out from Langsett Barn near Penistone. Once up onto the moor and along Micklden Edge, the runners settle in for a long steady pull toward Howden Edge, with the field unwinding before the speedy descent down to Howden Reservoir. A pleasant jaunt around the reservoir path brings you toward Howden Clough which presents ideal woodland running.

But then the fun really starts as you commence the climb toward Penistone Stile, which the locals sardonically refer to as ‘Ice Station Zebra’ due to its formidable reputation in wintry weather. Here the terrain turns from easygoing trail to morale destroying shin high tussocks. Eight miles in and this begins to sort the field out and Tim, a renowned climber, knuckled down and extended his lead from local Penistone lad Andy Swift, picking his way along the narrow sheep trod with classy expertise. Once he’d summited at Howden Edge, it was a foregone conclusion as he powered home to win in 1hr:45:42. Helen likewise displayed all the craft of the British Champion that she is to cruise round in 2:00:54 to come in 20th overall, and easily beating the next lady home who was Kimberworth’s Jo Bolton in 74th.

John CannonBall Lloyd similarly matched his own 4th place from last year to complete the symmetry but it wasn’t enough to give Calder the team prize which was claimed by Penistone. Elsewhere in the field, Calder stalwarts Dave Culpan and Martin Whitehead continued their accumulation of British fell races, each of them having done well over 100 different races in their careers so far. Big thanks go to Denby Dale Travellers who organised the event in exemplary fashion.