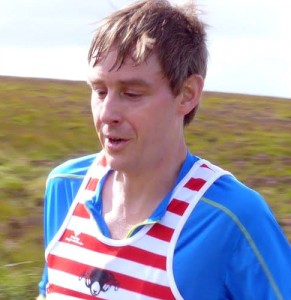 Calder Valley Fell Runners held their annual ‘Winter Handicap’ race on Saturday, where runners set off at intervals, slowest first, in the hope that everyone crosses the finish line at the same time.  The race, from Mytholmroyd, straight across the quagmire of Erringdon Moor, to Stoodley Pike and back, was perfectly timed to coincide with a downpour of rain that turned to a painful hail storm as runners climbed towards the Pike.  Caps, hoods and hands were employed to shield the eyes of competitors struggling to see where they were going against a barrage of hailstones.  At least one runner found that shorts provided insufficient protection from the elements and sought shelter by a wall rather than race on.  Hardier (or better dressed) souls ploughed on, staggered round the Pike in the wind, and were blown safely back across the moor to the welcome shelter of the Shoulder of Mutton.  First runner back was Andrew Meek, just ahead of Helen Buchan, who was fastest woman.  Fattest man was Shaun Godsman.

After prizes and warmth in the Shoulder of Mutton, runners went home to scrub up in time for the CVFR Annual presentation do.  Club members struggled to recognise each other without mud, sweat and stripy vests, with this year’s dress code being ‘posh’ – although it was Burn’s night the proportion of vegetarians in the club rendered a haggis themed evening unpopular!  Nevertheless, Iain Glendinning donned his kilt, and was the happy recipient of the ‘most improved runner’ award.  In the new Ultra Championship, the winners were Linda Murgatroyd and Kevin Hoult.  Helen Fines managed the impressive achievement of being both the Women’s Champion, and coming 3rd in the overall Championship.  The Men’s Champion was local teacher Tim Black.

Wally of the Year was hotly contested.  Last year’s winner Alex Whittem committed a number of acts of fell running stupidity this year, and made a last ditch bid to retain the title by losing the trophy, however he failed to compete with the joint follies of eventual winners Sharon and Shaun Godsman.  Navigational Cock Up of the Year went to geography teacher and top orienteer James Logue.

The final award, Runners’ Runner of the Year, is awarded on the basis of nominations made on the night.  This years’ winner was coach Mark Goldie.  Mark has coached increasingly popular training sessions every Tuesday night for a number of years, and his dedication and enthusiasm makes him a deserving winner of this award.