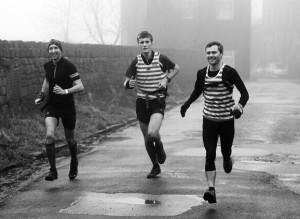 Saturday saw the staging of the ‘Hebden 22’, A Long Distance Walkers Association event organised by prolific LDWA event organiser Alan Greenwood. The event is popular with both walkers and fell runners alike attracting both competitive racers as well as those just out to enjoy a more cerebral social occasion in the beautiful Calder countryside.

The circular 22 mile route starts in Mytholmroyd and climbs up the steep valley side to take in Old Town and Slack, before descending towards Hardcastle Crags. From there the route climbs up to Blackshaw Head, heads on to Eastwood and climbs once again up the other valley this time towards Erringden Moor. Finally the route takes runners and walkers through Cragg Vale, along the beck that runs perpendicular to the long Cragg Vale ‘Tour de France’ ascent and across New Road towards Turkey Lodge. A final run home along Water Stalls Road via Little Scout Farm takes weary runners back to Mytholmroyd. There is also a slightly more forgiving 15 mile route that skips the seven mile loop from Cragg Vale to Turkey Lodge.

Calder Valley’s ‘M and M’ elite pairing of slim Ben Mounsey and shady Gavin Mullholland crossed the finish line together in equal first place in a swift time of 3:04. With very heavy conditions underfoot the course record was never going to be in doubt, but this was still a swift outing for the Calder pair, who also shared the spoils last year when most of the route was under snow.

Calder’s ultra-running supremo Ian Symington had a very fine run to finish third in 3:13, putting him well clear of Duncan Harris (3:22), a fine long distance specialist and Chester-based triathlete himself. Harris has won the local 32 mile Haworth Hobble for the past three years in succession, so this was a good early indicator of the flying Scotsman’s fitness over the longer races. Calder’s other ultra-distance specialist, Kevin Hoult, finished just three minutes behind Harris in 3:25.

Sunday brought the thirty-first running of Dave Woodhead’s Soreen Stanbury Splash, which heads out from Penistone Hill County Park in Haworth through Stanbury to Ponden Beck and back. The race frequently attracts running royalty with triathalon olympian Brothers Alistair and Jonathan Brownlee and a host of English and British champions doing battle over this perennially boggy course in recent years. The races are always extremely popular with large numbers turning out to test themselves in the mud and moorland made famous by the Bronte siblings.

This year was no exception with GB international Tom Adams beating over 400 senior competitors to record his second victory in this seven mile race. The Ilkley based runner is currently untouchable over these short to medium distance non-technical races and considering the quagmire that the recent weather has left behind, his time of 43:50 was all the more impressive. Following behind was Mark Addison of Helm Hill (44:49), with the evergreen and sixteen times winner of the race, Ian Holmes, third in 45:09. Current English champion Simon Bailey was even pushed down into fourth place. Local lady Helen Glover of Keighley and Craven posted an impressive time of 52:46 and she finished 33rd overall, ahead of Helen Leigh (Blackburn – 55:41) and Lindsay Brindle (Horwich – 55:50).

There was quite a battle betweeen Calder’s Mark Wharton, Ian Glendinning and Giles Simon, who finished seconds apart in 54th, 55th and 56th places. Glendinning improved greatly in 2013 and with his past pedigree he will be expected to continue on the upwards curve in 2014.