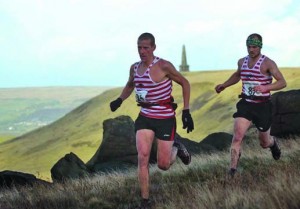 Godsman and Ellis in full flight in the run in to the finish.
www.woodentops.org.uk

The twenty eighth running of this very popular race from the Shepherd’s Rest Inn, above the town of Todmorden was held on a spectacularly stormy day with winter very much evident. The race is classed as a ‘B Medium’ with 1,150 feet (350m) of climb over the six and a quarter mile (10k) course.

With almost three hundred competitors and a bottle neck within yards of the start a lightning fast getaway is needed by any ambitious racer. The first mile is a steady runnable climb up to Langfield Common followed by a fast but boggy and rocky run across to Stoodley Pike via Coldwell Hill and Stoop. The descent off the Pike is via the shortest, steepest route and for those brave enough to take it on there are places to be gained and seconds to be saved here. At the foot of the Pike the route hits London Road where faster running is available. For those in the know it is wise not to go to rapid across here as a second climb awaits. This climb has a tougher gradient and with mud and bog thrown in only the fittest run back to Stoop. From Stoop it’s a gentle climb back over Coldwell Hill before a fast and tricky descent back to the Inn.

279 runners entered this years’ race and all but two managed to complete the course. Calder Valley Fell Runners (CVFR) had a significant proportion of the entrants (39) and they had a 100% completion rate. The large gathering of red and white striped competitors was no doubt due to this race being the last in the CVFR championship and with all the trophies still up for grabs the competition would be fierce.

The first runner home was outstanding athlete Tom Adams of Ilkley, over a minute clear of Chris Farrell of Horwich, who was just 11 seconds in front of Calder Valley’s Tim Ellis. Tim was followed in by Calder Valley’s Shaun Godsman and Alex Whittem and not surprisingly CVFR men took the team prize with Joe Washington making up the fourth member in 16th place overall. Tom’s time of 41.44 was quite remarkable given the wet, boggy, muddy conditions underfoot and the swirling wind.

In the ladies race Calder Valley’s Helen Fines won comfortably in 51.10 from Glossopdale’s Caitlin Rice. CVFR ladies won the team prize with Helen supported by Gayle Sugden and Issy Wharton in 5th and 10th places overall. This result also gave Helen the CVFR ladies championship in front of Helen Buchan and Kate Mansell. In the open championship Tim Black just needed to avoid any kind of mishap to win the title and he tucked in well down the field finishing easily in 20th place to claim the trophy and relegate Robert Paradise, who had led the way all season into second place. Helen Fines finished in third place proving that she is well and truly on top form. In the other categories Toby Sydes edged out Andy Thorpe in the handicap championship, Stephen Smithies did similar to Mark Wharton in the vet 40 category and Brian Horsley took the vet 50 title from Dave Culpan. Those still around after the prize-giving were given a treat as nature put on a powerful show of it’s own with hail, thunder and lightning. Thankfully this happened after all the races were finished and everyone was safe and warm in the cosy inn.