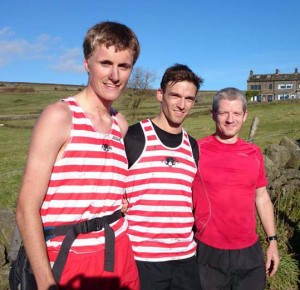 Sunday saw near perfect November weather for the running of the Wadsworth ‘Half Trog’ fell race. A mere 10 miles compared to the 20 mile ‘Full Trog’ slog in February, the race departs from The Hare and Hounds at Lane Ends above Hebden Bridge, where thanks must go to landlord Dave and his team for hosting us in such a warm manner. Thirza Hyde, the human dynamo supremo of Calder Valley Fell Runners had organised the race to a tee and 124 eager souls set out onto Midgley Moor in search of adventure.

The Wadsworth Trogs offer not only a stern test of fell running over arduous tussocky and sodden ground, but also a large element of navigation and route planning. The race takes you up to High Brown Knoll trig point for check point one, then rapidly down a muddy toboggan run that is Horse Pasture Clough, where shoes, socks and dignity can all be lost to the mud quite easily. Check point 2 arrives abruptly at the eerie Upper Dean Head Reservoir and then there is a relentless two and a half mile pull up to the Cock Hill weather station above Oxhenhope. Feeling tried? Well keep going back south over Midgley Moor to within touching distance of Jerusalem Farm, then it’s a kick for home to Sheepstones Trig and then the swift descent back to the pub for a welcome jar of Golden Best.

With this combination of terrain and navigation, it was no surprise that Calder Valley’s super-fellsman, James Logue, took the honours in a new record time of 1:08:42. Logue’s dominance saw him finish a logic-defying five minutes ahead of second place Joe Crossfield – no slouch himself as current British U-23 champion. Logue’s skill at such demanding events is a joy to behold, and he must be one of the favourites for the classic Tour of Pendle coming up in a week’s time. In third,and completing a clean sweep for Calder men in the team prize was Page Seven Fella Joe Washington, putting in perhaps his best race yet and vanquishing some illustrious names behind him.

First lady was Holmfirth’s Helen Berry in 23rd, with first local lady and first V50 being Calder’s indomitable Jackie Scarf in 57th, who must have a trophy cabinet bigger than Real Madrid’s. Calder’s ladies completed the coveted one-two in the team prizes with Gillian Wisbey and Linda Hayles completing the victorious trio.

The race was not without controversy however as 3 runners were disqualified due to missing Check Point 5 at Ferney Lee Farm. These included Calder’s Mark O’Connor, who honourably disqualified himself from 11th place after admitting to only having “skimmed” the check point, rather than actually arriving at it. After a steward’s enquiry and lengthy scrutiny of the FRA handbook it was deemed that skimming was indeed an illegal manoeuvre and not deemed to be an actual visit. As such, poor Mark was DQ’d.

Fancy a go yourself? All welcome at www.cvfr.co.uk