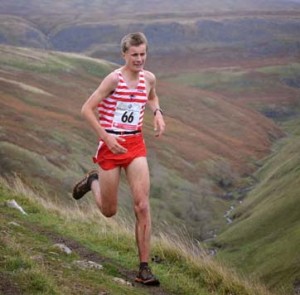 Joe in fine form as he descends Whernside. www.woodentops.org.uk

Ellis and Page cast their spell on the Bronte Way, whilst Crossfield spooks Holmes at Great Whernside, and OMM ends in Blair Witch camping horror

There is nothing obviously complicated about fell running. You run up the fell; you run down again. Sometimes by way of variation, you run up and down another – perhaps many others. That’s about all there is to it. Apart from the complications.

Those who ran for Calder Valley over the weekend experienced a wide selection of the “complications”; whether it was heaving their screaming quads up the near-vertical gradient of Great Whernside before a kamikaze descent down its greasy, rocky, crags; or facing icy flagellation by marble sized hail-stones, propelled by gale-force winds, as they slipped and slided on the mud-shuts of the Bronte Way; or navigating their way across the Brecon Beacons for 2 solid days of sodden running, carrying tents and survival gear across the storm-lashed tussocks and mountain sides in the Original Mountain Marathon.

In the true spirit of fell-running Calder Valley’s men and women stoically faced these “complications” head on, over-coming the landscape, elements, and exhaustion to turn in some typically gravity-defying performances.

First up was Saturday’s Great Whernside fell race, a 4 mile, category A, Yorkshire Dales classic, featuring 1555 feet of ascent. Starting from Kettlewell the route is an old-school, straight up-straight down affair. Calder Valley’s Joe Crossfield lead the field of 114 runners up the steep ascent to the moorland plateau of Hag Dike; the young star skipped up this tortorous 1000 feet ascent with Bingley’s Ian Holmes in close pursuit, Crossfield maintained his advantage across the open fells to the final ascent of the grit stone peak, before the wily Bingley veteran made his move; Holmes seized his chance on the hazardous rocky drop-off, as he danced a perilous path through the boulders to overtake Crossfield on what is possibly the most exhilarating descent in the Dales. Crossfield threw himself down the slope in a last ditch attempt to regain the lead, but Holmes stuck tenaciously to his task and crossed the line 10 seconds ahead of his Calder Valley rival, in 31.49. Adam Perry of Pennine Fell Runners was 3rd in 32.29, followed by a host of Wharfedale’s local men, and Valley’s Rob Paradise (31st), James Kershaw (39th), and Trevor Murgatroyd (68th). Victoria Wilkinson dominated the women’s race to make it double celebration for Bingley.

There was a spine chilling feel of Halloween in the late October air as wicked weather hexed Sunday’s Bronte Way Fell Race; starting at Wycoller, in the dark heart of Pendle Witch Country, the 8 mile race attracted 21 Calder Valley hopefuls keen to score points in the hotly contested club championship. Torrential rain was followed by gale force winds and horizontal hail, turning paths to bog whilst blinding the 180 competitors as they leapt swollen streams, and hurdled bracken-hidden rocks, across the wuthering Bronte Moors to Haworth. Tim Ellis and Holly Page put in spell-binding performances to make it a Calder Valley clean sweep. Ellis took the men’s race in 53.11, a full minute ahead of Wharfedale’s Sam Watson, whilst Page (1.01.15, 17th overall) dominated the ladies race from start to finish, over 5 minutes clear of her nearest rival, sandwiched between fast guys, Tim Black (16th) and Andy Thorpe (18th) .

Meanwhile club mates fought for vital club points, including a fiendish battle between Messer’s Wharton, Smithies, and Paradise. With only seconds separating the unholy trinity, Wharton had lead the way from the satanic storm-lashed moors of Lancashire into the sunbathed valleys of god’s own country, to the final 300 yards up the cobbled high street of Haworth. With the finish line in sight, Smithies summoned up all his remaining strength, looming into Wharton’s peripheral vision, with a “murderous glint” of grim determination in his eyes. Wharton’s championship dream suddenly turned to the nightmare sensation of running through treacle, as Smithies’ unstoppable pursuit carried him past his rival in 1.02.14, to secure 21st place, together with pole position in the club vets table with only one race left to run. Rob Paradise completed another heroic 2 race weekend, finishing a minute behind in 27th place (1.03.21). Latest club championship positions can be found on the CVFR website courtesy of club rocket-scientist Bill Johnson.

The true heroics however took place at the Original Mountain Marathon (OMM) in the Brecon Beacons. A band of seriously committed Calder Valley members ignored the voices in their heads to embark one of the UK’s toughest running events. Preparations included 20 mile training runs, 6am starts, packs weighed down with bricks, under simulated conditions of sleep deprivation and exhaustion. Mountain Marathons are an extended form of fell running, over two days with a strong orienteering element. Competitors participate in teams of two, carrying their own food and tent. There are various classes of event. Elite, A, B, C, D and Long, Medium and Short Score.

Calder Valley’s hard woman, Linda Murgatroyd entered the OMM “Long Score” class with Stef French from Keighley & Craven. The pair ran across open fells through horizontal rain for 7 hours on day one, followed by a sleepless night in a freezing tent, before trekking a further 5 miles on day 2, only to find the event brought to a premature end as the atrocious weather threatened the safety of competitors. The pair scored 380 points in total to finish as third females. Mike Wardle and Rod Sutcliffe finished 30th in the same event, but the performance of the weekend went to father and son team Phil and Ben Scarf who took 3rd place overall. Ben’s mum, Jackie, completed the family weekend-away with a 32nd place in the Medium Score event. Toby Cotterill and ex-squaddie Jake Roy made a military-style operation of the weekend; both deserved bravery medals for the 39 miles and 10,000 feet they ran to arrive 44th in the C Class event.

In a desperate story of survival in the Elite event Bill Johnson ran with Helen Fines; the pair were 2nd on day 1 in the mixed pairs category before disaster struck. In the midst of a monumental downpour a camping stove toppled into the tent narrowly avoiding a frightening blaze, and the loss of their precious shelter; things went from bad to worse as they made the mistake of pitching their tent on a slope. The unrelenting rain continued to fall through the night, filling the tent with ice-cold water, wrecking any chances of sleep, and eventually forcing the pair’s retirement from the race on the grounds of general despair.