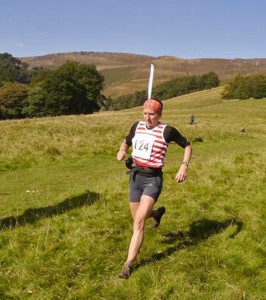 Helen crossing the line at Edale

Calder Valley’s top guns headed to the Peak District on Sunday to compete in the re-arranged Edale Skyline. As the name suggests, this takes you on an undulating, 22mile plus route of the picturesque scenery above Edale village, famed for being the southern start point of the Pennine Way. On a pleasant but windy day, the race was the final counter in this year’s English Fell running champs so a strong field inevitably turned up, including Calder’s Helen Fines who was looking to cement her share of the ladies’ spoils with Bingley’s Victoria Wilkinson.

Helen’s brilliant 3rd place was enough to do just that, and in the men’s, Calder’s James Logue lead home a strong Calder contingent finishing in a brilliant seventh place, and with three others, namely Ben Mounsey (14th), an exhausted Gavin Mulholland (16th) and Ian Symington (20th) also having super runs, Calder can take great pride in having four runners finish in the top 20.

Closer to home, Saturday’s Thieveley Pike fell race out of Cliviger saw plenty of red and white vests in attendance with it being a club championship race. This tough little Class A gem is becoming a real star of the calendar, its four mile burst really testing the stamina of the field with steep climbing and sharp descents. With the adjacent farmers’ fair, sheep dog trials and dog agility contest going on, you really could have been at a Lakeland show; especially with the number of Land Rovers, Hunter wellies and tweed jackets on show.

On a lovely sunny day local postie Alex Whittem finished second, hard on the heels of winner, Horwich’s Joe Mercer. A good scrap also ensued between Mark Wharton (Dad of Max), housewives’ choice Rob Paradise, the bearded Lee Shimwell and new French acquisition, Giles Simon, all of them vying for precious championship points as the denouement of the season approaches.

Up in The Lakes at the Rab sponsored Mountain Marathon, Jackie & Phil Scarf, Cragg Vale’s indestructible duo claimed victory in the mixed ‘short score’ category. Don’t be fooled by short though as this involves two days of six hour running and map reading over some of Britain’s prettiest but toughest terrain, where you have to carry all you need to survive, such as tent, food, stove, pyjamas, dressing gown, the lot.

In the solo event, Calder’s Bill Johnson demonstrated his prowess with a splendid 6th place in the ‘long’ category, despite the unseasonable warm conditions which caused dehydration issues for all competitors.

It was especially good to see Charlie Boyce back competing at the event (with Peter Bowles) after his dreadful cycling accident in the winter. Charlie and Peter finished 104th on the short course. Welcome back Charlie! Also on the short course, Linda Murgatroyd was 122nd with John McIntosh, and Neil Croasdell & Gerry Symes were 146th in Gerry’s first mountain marathon.