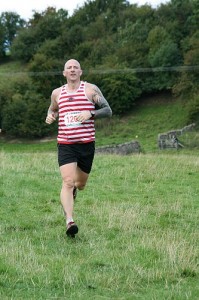 Paz in action at Embsay. www.woodentops.org.uk

The deceptively named Good Shepherd Fell Race bounced back from a disappointing 2012 turnout as a healthy entry of 99 runners made their way to Mytholmroyd on Saturday morning for what many prefer to call the Bad Shepherd, given its potential to leave the badly prepared to wander lost and bewildered across empty hill sides. Covering a lung-busting 14 miles of moorland, including 2 tough ascents of Stoodley Pike, this year’s race featured the additional challenge of tricky navigation in disorientating autumn mist.

Starting out from Dauber Bridge in Cragg Vale, Calder Valley’s men disappeared into a veil of damp fog which threatened to lead the Shepherd’s flock astray on the long, un-flagged sections across Withins Moor.

The visiting runners perhaps mindful of the Sherlock-Holmes style pea-souper, tucked-in behind the locals, allowing Ellis and Logue to shepherd them round the unmarked parts of the route. This ensured that all 4 of the leading runners reached the 14th mile within 1 minute of each other, at which point the Horwich Harrier and Valley’s Logue pushed ahead of Elllis, who had kept pole postion to within sight of the finish line.

Calder Valley’s dark horse, Graeme Brown, shadowing the pack the entire way, surely marked his cards for A team selection as he arrived back in 6th place (01:46:35) behind 5th placed Dave Kirkham of Wharfedale Harriers, and in doing so helped Calder Valley to the men’s team prize. Lorraine Hopley of Rossendale won the women’s race in (02:14:53).

The rest of field filtered back having enjoyed yet another great day out on the South Pennine moors, to be greeted by volunteers offering warm soup and drinks. Organisers of this wonderful charity fund-raiser, hosted by the Good Shepherd church, can now look forward to its 10th anniversary with some optimism, as the event re-establishes itself in the fell running calendar.

Calder Valley’s Alex Whittem was 20th in 1:24:48 and Trevor Murgatroyd 33rd in 1:38:30 at the Scafell Pike race, a very steep and technical 4.5 mile race in the Lake District. Low cloud made navigation a challenge and the ground was very wet. Hunters Bog Trotters’ Murray Strain led a field of 58 home and women’s winner Hazel Robinson (Ambleside) was an amazing ninth overall. Valley’s Liam Gough came third in 22.28 and Robert Paradise seventh in 23:45 at Sunday’s three-mile Beefys Nab race at Leeming near Oxenhope. Wharfedale had a 1-2 through Mark Sennett (21:44) and Paul Crabtree (22:06).