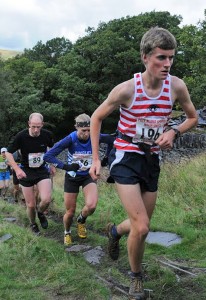 Joe with Vic Wilkinson hot on his heels at Peris

There was double joy this weekend for Calder Valley as Helen Fines and Shaun Godsman became national champions. Club captain Helen became joint British Fell Running champion after a nail-biting climax to the season at the Peris Horsehoe event in Snowdon. The race saw the culmination of a season-long, ding-dong battle with her main adversary, Victoria Wilkinson. Wilkinson, who is a specialist and decorated mountain runner, was well suited to the course in Snowdon and needed to win to secure her own share of the spoils with local vet Fines.

The classic Peris race is rightly regarded as one of the toughest on the calendar with over 16miles of brutal climbing and descending in an around Snowdon National Park. Helen threw her heart and soul into the race and has the cuts and bruises to prove it, as she fell several times on the unforgiving Snowdonian peaks in her pursuit of Wilkinson. Wilkinson prevailed with a strong win, but Helen’s heroic fourth place meant that she shared the overall British crown, with her brilliant wins at Silent Valley (Northern Ireland) and Blisco (Lake District) plus her second place at Yetholm (Scotland) meaning she couldn’t be dislodged.

The title is a fitting end to Helen’s season which has seen her elevate herself to the very top of the female ranks and show what a class act she is. Sheer hard work and an iron will have seen Helen go from good to very good indeed and she will be determined to defend her crown next year.

There was further glory and another joint British Champion with Calder’s Joe Crossfield taking the Under 23 title. Joe does his road work with Halifax Harriers, but has recently joined Calder Valley to hone his fell skills, and is clearly another young runner blessed with huge talent.

Elsewhere, Tod’ fireman, Shaun Godsman secured his first British Open Fell Running (BOFRA) title but boy, did he have to work for it. Shaun has shown binary form throughout the BOFRA series this year having finished first or second in all the races he’s run in. His laser like focus on winning this BOFRA crown was put to the test by the equally determined Ted Mason of Wharfedale. Going into Saturday’s deciding Burnsall race, he was neck and neck points-wise with Mason, with either of them in a position to win the big prize.

Shaun picks up the story for us: “The race started fast and I led it out but could not shake off a young Leeds City runner, Jack Simpson, who has been injured most of the year and is now making a comeback. We climbed together and dropped Ted a bit and turned at the summit together and I basically blundered my way down the tricky descent managing to keep in front of Jack, just! On climbing the wall into the fields I noticed Ted had nearly caught us on his ‘secret’ route and was coming in from the right hand side of the fields. From here it is basically a mad sprint for a couple of minutes to the finish. Jack just got in front at the top of the last two fields with a lung busting sprint down to the finish line, I just couldn’t pull him back. Jack was 1st in 14min 12s I was 2nd in 14min 13secs and Ted was 3rd in 14mins 14secs – three seconds between us! Thankfully it was enough to give me the BOFRA title as Ted needed to beat me in all 3 remaining races. They say it’s the first time that a v40 has won the championship so I will win the open and the v40 titles, there’s some grace in getting to that 40 mark I suppose!!”

Closer to home the inaugural Turbine Tangle in Rossendale saw runners aim to navigate all twenty six jumbo wind turbines on Cowpe Moor within three hours. Jim Mosley (14th) and Tony Steward (24th) both completed the course for Calder Valley in what was widely agreed to be an excellent new addition to the calendar. It’s good that wind turbines have some uses after all!