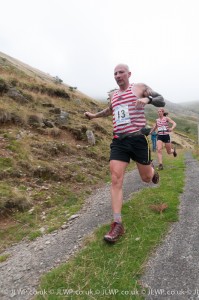 Following their 2nd place in 2012, Calder Valley Fell Runners men were hopeful of a strong finish last weekend in the annual Ian Hodgson Relay from Brotherswater, Patterdale in the Lake District. Unfortunately however, poor weather conditions resulted in a catalogue of navigational errors which ultimately led to a disappointing finish.

This Lakeland mountains relay race, held annually in memory of a Leeds based runner who was tragically killed in a road accident the day after winning the prestigious Karrimor Mountain Marathon in Cumbria, is run over four legs with competitors running in pairs. Last year another runner, Darren Holloway, tragically died of heart failure whilst competing on leg 4 and it was testiment to his memory that his club Pennine Fell Runners finished this year’s event in a club record 4th position.

Calder Valley were the first Calderdale team to complete the 24 mile route, finishing fourteenth from 70 teams. The Calder Valley B team were 29th with Todmorden Harriers A in 30th.

The event was won by Borrowdale runners who took their 17th title in the event’s 26 year history.

First off for the Calder club was junior international Max Wharton and Joe Washington who ran the 4.5 mile leg from Patterdale to Hartsop in 3rd place and in an impressive time of 35 minutes. Washington did extremely well to hang on to the young Calder valley starlet and in the process demonstrated his potential as a top club runner. Equally impressive was the B team’s only female competitor, Jo Buckley who put in a stirling performance with teammate Rob Paradise (pictured) to finish in a very respectable 26th position.

Next up for the A team were in form Shaun Godsman and Alex Whittem, who took up the mantle for the 7 mile run to Kirkstone Pass. They were hopeful of running one of the fastest legs of the day but unfortunately like many of the other teams they took a poor line during the race and ended up getting hopelessly lost in the mist, finishing some 16 minutes behind many of the top teams. The B team combination of Steve Smithies and Bill Johnson fared much better and despite a number of small errors minimised any time loss.

Next for the A came a blend of youth and experience with young Calder runner Joe Crossfield pairing up with Todmorden based crack orienteer James Logue to carry the baton to Sykeside campsite. Unfortunately however Logue suffered a very rare off day when he made a poor navigational error and uncharacteristically lost even more time to rival clubs in the extremely poor weather conditions. In reverse fortune the B team enjoyed a very successful leg with Mark Goldie and Lee Shimwell. Without making any major error they actually beat the time of Logue and Crossfield.

Finally, Calder Valley’s captain Ben Mounsey and Tim Ellis took the baton for the A team on the anchor leg where they managed to overhaul a number of teams on the tough 7.5 mile leg to the finish. But they like the rest of the team made yet another navigational error at Fairfield costing them around 6 minutes and blowing the chance of recording the fastest time of the day. However, despite the error they still managed to run the 7th quickest time of the day and bring the team back to a more respectable 14th place finish. Ian Symington and Johny Helliwell ran solidly for the final leg of the B team and just managed to be local rivals Todmorden by just 9 seconds.

At the front of the race Borrowdale’s Jim Davies and Ben Bardsley held off the challenge from a very strong Dark Peak team to record yet another victory for the local club.

Calder Valley will hope that this was just a poor dress rehearsal for the British fell relays, held in Llanberis, Snowdonia in two weeks time.
(See Captains Log for the unedited version)