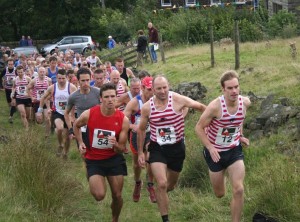 No 12 Whittem takes the lead from the start

Saturday’s record entry for the 6th running of the Blackshaw Head Fell Race provided further evidence of the surge of interest in off-road running. The booming South Pennine fell race scene continues to attract ever increasing numbers of runners to Calderdale’s magnificent valley’s, woods, and moorlands. With over 50 races in a 15 mile radius nowhere else in the UK can compete with Hebden Bridge’s claim to the title of national fell running mecca. It is perhaps no coincidence that this unrivalled access to a weekly diet of tough competition has seen the upper valley develop into a centre of fell running excellence. Local clubs are now producing some of the UK’s leading talent, whilst new-comers and novices are signing up to the pleasures of running across breath-taking South Pennine moors and woodland, rather than soul-destroying tarmac and concrete. A bumper Blackshaw Head field included 32 Calder Valley, and 14 Tod Harriers as 112 lined up on the gala-field start line. Setting out from the village fete the runners were cheered on their way by festival crowds enjoying the late summer sunshine. The 5.5 mile route then took in a series of steep climbs around the Colden valley totalling 900 feet of ascent, interspersed with classic sections of wide open wilderness across Standing Stone Hill and Heptonstall Moor. Conditions were good under foot after the warm, dry summer, but the forecast gales soon added a blustery challenge to proceedings. In-form favourite Alex Whittem certainly had the wind in his sails as he breezed his way to a commanding lead. The Calder Valley runner maintained pole position as the pursuing pack tried in vain to chase him down on the final descent, along the Peninne Way, from Mount Pleasant to Jack Bridge. Whittem took the course record in a fantastic 36min19seconds, making light work of the 300 feet climb from the stone clapper bridge in Colden Clough, to the Blackshaw Head finish line, well ahead of club mate Graeme Brown (37.09), and Tod Harriers Nick Barber (37.27). Helen Fines made it a Calder Valley double winning the women’s race in convincing style 5 minutes ahead of her nearest rival, in 42.30 and 20th overall. Race Organiser Guy Whitmore and his team can be rightly proud of their efforts in adding yet another marvellous event to the UK’s premiere fell running calendar. Whilst Calder Valley’s seniors were covering themselves in glory at Blackshaw Head Jack Denton was flying the colours at the Bradley Fell Race. Jack continued to show his potential, finishing 2nd Under 17 (21:21) in a very competitive field as the race featured as an International trial . The up and coming Calder Valley youngster is waiting to see if he’s been selected to run for England in the Junior Home Internationals in Aberfoyle. Denton’s arrival on the international scene would provide yet more evidence of the strength of local fell running, with a host of future stars taking to the fells at the highest level.