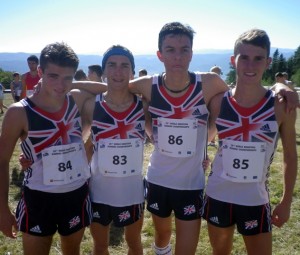 The 29th edition of the World Mountain Running Championships took place last weekend in the mountain resort of Krynica-Zdrój in Poland. British Athletics sent full teams for four races: junior women (U20), junior men (U20), senior women and senior men. The event took place alongside the annual Running Festival Biegowy that is hosted by the town and brings 8000 runners together, providing an exceptional and vibrant atmosphere to the championships that saw 365 runners from 40 countries compete on the unusually challenging ‘down and up’ course.

The World Championship alternates, each year, between an ‘uphill only’ competition and an ‘up and down’. For the first time in its history the course challenged the runners to a ‘down and up’ course where they tackled a steep climb on the ski slope after descending 276m in 2.5km in each 4.65km lap. The junior women ran one lap; the junior men and senior women, 2 laps and the senior men 3 laps.

The first race of the day, the junior women’s saw Annabel Mason and Georgia Malir (GBR) together, at the front, in the early part of the climb with Catriona Graves (GBR) in 15th. Annabel and Georgia pushed each other on towards the finish but were eventually overhauled by Mandy Ortiz (USA), Lea Einfalt (SLO) and Tubay Erdal (TUR). Their final positions were 4th and 5th respectively with Catriona coming through brilliantly into 6th place bringing the team home for gold. Annabel spoke of her race plan after the race, “I ran my own race and ignored everyone else and went at the pace that I thought I could go at. I was a bit worried about the transition from the descent to the climb but I just got into it and it didn’t hurt as much as I thought it would. The hurt came later in the course!”

The junior men also packed extremely well in their race. At the top of the climb after one lap, Brad Traviss (GBR & CVFR) was in 4th place with Nathan Jones (GBR), Max Nicholls (GBR) and Max Wharton (GBR & CVFR) together in 13th, 14th and 15th. After moving into 3rd place at the bottom of the 2nd lap Brad eventually finished a very credible 6th place and equalled the highest position by a British junior man in these championships (Dewi Griffiths, 6th, 2010) with Max Nicholls 12th, Nathan Jones 14th and Max Wharton 15th to give the team the bronze medal behind Czech Republic and Italy. After the race Brad commented, “I’ve got to be pleased and I’m so happy for the team. In the Europeans [in July] I’d trained so hard and that was a big focus and I was so ready but I had a bacterial infection and it took it away from me. I was so disappointed but I had that rest and I believed in myself. I came nowhere in the Europeans but I’m glad it’s happened at this one.”

I’m very Happy with my individual position and the team bronze especially, the whole team had probably the runs of their life to secure the bronze medal and it was an amazing feeling standing on a World podium. I have 2 more years as a junior so hope to maybe challenge for a medal in the future. My mate brad and I both live in Calderdale and we’re both top 15 in the world.

The senior women also ran the two lap course and Emma Clayton (GBR) took an early lead but was eventually reeled in by Alice Gaggi (ITA) and so Emma had to settle for the silver medal. Afterwards she commented, “I knew I was in good shape but Gaggi was so strong and I lost it on the climb but I’m delighted. I’ve done a lot of off road runs and prepared by running really hard down the descents. Every time I hit a descent I would work hard down it and I’ve also done a specific hill session every Saturday. The transition from the descent to the climb was fine on the first lap. I held back a bit on the descent but because I worked so hard on it on the next lap I found it quite tough.” Emma was backed up by Sarah Tunstall in 8th, Mary Wilkinson in 12th and Katie Walshaw in 16th to give the team silver. Emma got her first British vest as a junior in 2006 and said that she is proud to be on the team with her role models, “It’s taken a long time for me to get into the senior ranks but people told me my time would come and it has come. I ran as a junior in 2006 and got my first senior vest in 2011 but I worked hard and now I’m on the team with the girls that I’ve been looking up to for years.”

The final race of the day and arguably the toughest, due to the heat of the day, a three lap course and a strong African representation saw a solid performance by the British men’s team led home by Chris Smith in 19th and followed up by Andi Jones (26th), James McMullan (48th), Tom Adams (51st), Nick Swinburn (63rd) and Rob Samuel, who unfortunately suffered with a hamstring problem in 70th. Their team position was 7th.

Team leader, Sarah Rowell, commented “We were always excited about the senior women’s prospects and they certainly delivered but even more exciting is the potential we have seen from the British juniors, many of whom will remain in this age group for the next couple of years.”