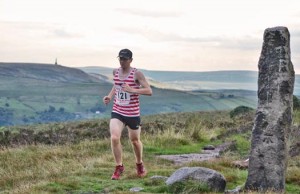 The Crow Hill race has been run in reverse i.e. steep start and down through Mytholmroyd’s Redacre Wood, rather than up through the woods since 2011 when the race was took on by Ali Mills. Ali wanted to organise something to raise money for Ovarian Cancer and jumped at the chance when the race became available. Ali’s physiotherapy practice cover all the costs of the race with the entire proceeds going to the charity, Ovarian Cancer Action.

The evening of the race was warm and sunny and a record number of runners, 123, gathered on the canal bridge. A fast start is required for those wanting to avoid the inevitable bottleneck that happens at the kissing gate after only a hundred yards of very steep running. As the gun sounded, first round the corner and off like a bolt towards the gate was Spanish runner, David Bodin. David’s lack of local knowledge can be excused as he took a wrong turn just before the gate and headed into a forest of shoulder height ferns, but why all the leading locals decided to follow him is not. The route was even marked with high visibility tape! At this point Dave Collins of Todmorden, took the right route and found himself unexpectedly leading the race. As the course continued up a steep field the leaders made up the lost ground with some entering the field via the ferns and some re-tracing their steps back to the gate.

With an extra prize for the first man and woman to reach the trig point at the top of Crow Hill it was Tim Black of Hebden Bridge and running for Calder Valley that arrived first. David Bodin, in his introduction to English fell running, had unwittingly set off way to fast and had paid the price as he saw four runners now in front of him. In the ladies race Lindsey Brindle of Horwich was just seconds in front of Haworth’s ‘Iron Lady’, Barbara Lonsdale also running for Calder Valley. Barbara was quicker on the descent though and claimed a reputable ‘scalp’ by beating Lindsey into first place by a fairly comfy 17 seconds.

Tim had it even comfier in the men’s race winning by almost a minute from club mate Joe Washington. With first and second in the bag it was left to Chris Standish and Robert Paradise to battle it out for the final team member prize. Robert just made it by a mere 5 seconds. Todmorden Harriers won the ladies team prize and over a fifth of the racers (26) were Calder Valley members.

Post race presentation was held in Mytholmroyd Community Centre where beer, coffee and pizza was welcomed by the racers. Much to the delight of race organiser, Ali, £700 was raised for Ovarian Cancer Action.