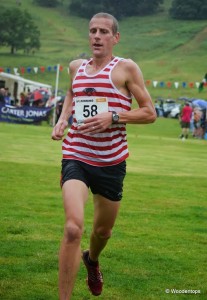 The 4.5 mile Lakeland event is another old-fashioned short, fast race, and is the 9th of 15 runs that make up British Open Fell Runners Association (BOFRA) Championship. Setting out from the village of Farleton, just south of Kendal, the 129 runners climbed steadily around Farleton fell to reach its grassy summit, before embarking on a breath-taking, kamikaze descent down the ridiculously steep, loose scree at Holmepark Fell. Once safely at the bottom, there was no respite before a long hands-on-knees climb back up to the summit. The race finishes with a fantastic, fast finale, first down a series of steep, mountain slopes, then through bracken, to the welcoming crowds on the finish fields.

In a close finish the Calder Valley runner took 1st place in 35 minutes and 59 seconds, 21 seconds ahead of Ian Nixon of Pudsey and Bramley. Ted Mason of Wharfedale was 3rd home in 35.39. Club mate Rob Paradise continued his rise through the ranks to turn in an impressive 22nd place (43.48) in a top quality field. Shaun may need to look over his shoulder if Paradise keeps chasing down rivals at this rate.

Together with his performances at Kettelwell (2nd) , Helm Hill (1st), Kirby (1st) Cracoe (2nd), Ambleside (1st) maximum points at Farleton have left Godsman well placed to win the overall BOFRA Championship. He is currently in 11th position having entered fewer races than some competitors, however, championship competitors are judged on their best 8 results in the 15 BOFRA summer classics. Godsman must now pick 2 of the remaining “counters” from the likes of Arncliffe Gala, and the historic Burnsall Race. If Godsman continues to ignite his Farleton form the Todmorden Fireman is surely the hottest prospect for BOFRA Championship gold.