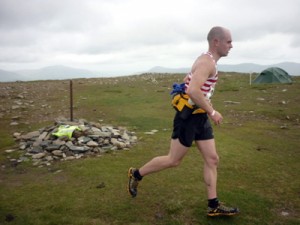 On Saturday fell runners headed up to The Lakes for the Darren Holloway Memorial race. Darren, a hugely popular amateur runner who sadly died while competing in the nearby Ian Hodgson relay race last year. This Buttermere race was last run in 1990 and ascent route was being anticipated with a mixture of fear and dread as it takes in some of The Lakes’ toughest peaks. Many fell races claim to be tough but with 21 miles and 9000 ft to negotiate, this race can certainly back-up that claim with some of the hardest terrain on offer in UK fell running.

So for Calder Valley’s Tim Ellis to finish 5th in a very strong field was a brilliant achievement, Tim claiming it was easily the toughest race he’d taken part in. Blackshawhead’s Ian Symington took an excellent 24th place as was also heard to be in awe of the route. Big credit also goes to Bill Johnson who chose this not insignificant race to return form a long standing injury.

For those of you who know your Lakeland scenery, the following may make giddy reading. After an initial half mile or so along a back road from the village of Loweswater near Crummock Water, it’s straight into a 2000’ climb to the summit of Whiteside, to sort the men from the boys. But the climb continues: further on up to the higher summit of Hopegill Head.

From here a long, swooping, grassy run high above the valley floor leads in turn to Coledale Hause, Grasmoor summit and then the top of Whiteless Pike. Four lakeland summits gained and the race is only a quarter of the way through! The descent from Whiteless Pike is very steep and very fast and one of the best in the Lake District: 1500’ down a grassy slope in about 2/3 mile.

Now the race really starts to get going, with a long gradual climb, skirting around Robinson (where the key is all about finding the best line; Ian Symington and Tim Black didn’t, and ended up clinging to the crags to get through!) and finally ending up at Dale Head summit. Now we’re about halfway through.

Another big, fast descent down to Honister slate mines is followed by a good track, up and down (but mostly up) towards Hay Stacks. At this stage, those who can, will run; those who can’t will shuffle. Several runners were starting to get cramping muscles by this stage.

If you know the route, you skirt round Hay Stacks, before a stiff climb up to Seat and then a bigger, stiffer climb up to High Crag. There were some very tired bodies by this point. A grand ridge, with good views (on a day when you have the strength to look at the views), takes you to High Stile, the highest point on the route at 806m (2645’).

With the thought of the final climb to come, you now run on a glorious, grassy hillside around Red Pike and down, down to Scale Beck.

Finally, a steep descent through the heathery sides of Mellbreak came to a valley-floor track, and a final mile and a bit of trying to run as best you could to the finish at Loweswater village hall, where those who had already finished gathered to clap in every runner as they crossed the finish line. Local distance king Simon Booth won in a super time of 4hrs 2 mins.