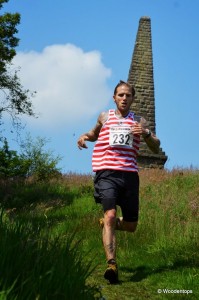 Johnny on his way to first win – Courtesy of Woodheads

Saturday’s Heptonstall Festival Fell Race turned into a fabulous scrap between a string of worthy contenders with one vanquished runner being carted off in an ambulance. In sweltering conditions on a perfect summer’s day, it’s hard to imagine a better venue for a short fell race with freshly mown fields, glorious azure skies, breathtaking views and the faint sound of a German oompah-band in the background. The Teutonic theme was the brainchild of organiser-extraordinaire, Steve Grimley, who put on yet another splendid fell race to add to his growing list.

The race comprises 6 miles and 1647 ft of climb and in very hot conditions, this was a lungbusting test of stamina and resolve. The race takes you immediately down into Midgehole past the Blue Pig with then a gruelling climb all the way out of the valley floor and up onto High Brown Knoll. Tod Harrier’s Nick Barber set the early pace and crested Pecket Well road crossing in the lead with Wharfedale’s Dave Kirkham and Mark Sennett hot on his heels. These two were kept in close attendance by Calder Valley’s Joe Washington – fresh from his maiden victory on Wednesday at Cragg Vale – and new boy Jonny Helliwell. In the absence of some of Calder’s bigger names, these two are showing that the club has an enviable strength in depth and with veteran Mark Goldie summiting High Brown Knoll trig point in sixth place, the scene was set for a rip-roaring second half return back to Heptonstall.

As the group rattled past ‘Little Stoodley’ and back down into Midgehole, Wharfedale’s Dave Kirkham had nipped ahead of the rapidly expiring Nick Barber, with Washington and Helliwell pushing hard to stay in contention. Back past the Blue Pig again and the excellence of Steve Grimley’s route was there to behold as the final, withering climb back up to the finish line bore its teeth. Step forward Jonny Helliwell who crushed the leading pack with a masterful ascent, his renowned training regime of multiple reps of Scammonden Steps reaping huge dividend as he emerged from Lee Wood and onto Draper Lane in first place, and powered gloriously to the finish line in front of a rapturous crowd to claim his own maiden victory. Kirkham and Sennet took 2nd and 3rd while Barber somehow hauled himself over the line in 4th place, only to collapse in a crumpled heap with exhaustion, requiring the local ambulance to navigate the tricky streets. More water next time eh Nick?! Jonny, along with Goldie and Washington helped Calder claim the men’s prize.