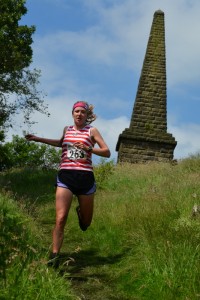 Heptonstall Festival Fell Race takes place on Saturday as local runners take on a Germanic theme to raise funds for the village festival despite the on going closure of Lee Wood Road. Heptonstall’s race organisers, who are mostly Calder Valley members, decided that with sufficient planning the challenging Category A Fell Race could be staged on its usual July date, with minimal impact on traffic flows.

The 6 mile, 1500 feet ascent, Heptonstall Festival Fell Race would normally take place as part the annual village festival traditionally held in early July, however the Village Festival has now been moved to September 21st. Festival organisers hope that the work on Lee Wood Road may be nearing completion by the autumn, allowing queues of frustrated motorists to make way for a parade, bunting, street entertainers, stalls, and caterers on Heptonstall’s famous cobbles. The runners were unable to alter their fell race date as the event has now become a popular fixture in the FRA calendar, but the race organisers were still keen to do all they could to support the festival. 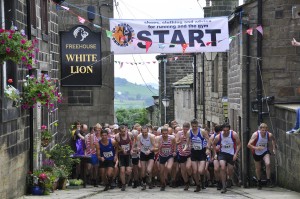 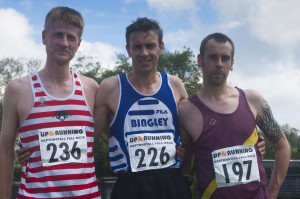 It was decided that the 2013 Heptonstall Festival Fell Race would take place on its normal date, as an early summer fund raiser for the autumn village festival, helping to cover the cost of bands, artists, and parade costumes as the September event promises to be village’s biggest and best ever festival. This Saturday’s race will not be short on festival spirit, however. Heptonstall’s TV celebratory chef Jan Lymer is all set to host an outdoor feast of German cuisine, including Frankfurters, Sauerkraut, and Strudel. Jan, who is due to appear on “Come Dine With Me” in the autumn, was once a chef in Germany. In scenes more reminiscent of Heidelberg than Heptonstall, rows of tables and benches will fill Weaver’s Square, allowing weary fell runners fill-up on Teutonic delicacies (£3.50 a head – all funds to the village festival). Non alcoholic drinks will be served in the square, whilst the White Lion will have Austrian beers on draft to add to the Germanic theme.

If the German beer-fest format proves popular there is even talk of making the Heptonstall Festival Fell Race an international event in 2014. Organisers would like to invite German runners from the twin town of Warstein, famed for its beer production, along with hordes of continental athletes heading to Hebden Bridge for the Tour de France which will cross the Heptonstall route the day after 2014 race. To avoid clashing with the first day of the tour the race may be held on the Saturday evening, kicking off what should be a memorable pre tour party in the village the square.

Heptonstall Festival Race Organiser Steve Grimley said, “It would have been a great shame to have cancelled the 2013 race. The local community have put in so much effort into making the Festival Fell Race an important fund raiser for Heptonstall Festival. We have been working closely with the local Highways Department, and we are confident that the issues caused by the ongoing closure of Lee Wood Road will be overcome”, Highways officials will be setting up diversions for race-goers, ensuring race traffic avoids the narrow, cobbled, village streets, which are currently clogged with drivers by-passing the road closure at Lee Wood Road. Race goers will be encouraged to travel to Heptonstall via Mytholm Steeps and Blackshawhead. Parking will be provided in the usual fields at the top of the village if weather permits; should the parking field be out of use, runners will be directed to parking spaces on the roads around Draper Corner and Slack.

The diversions will allow the 6 mile fell race route to remain unchanged, particularly the classic cobbled start, where runners will line up before being treated to the best of the local landscape as the race follows its unusual double-descent format, featuring a 500 foot descent to the Blue Pig, followed by a 1000 foot ascent to High Brown Knoll, where runners turn tail and head back to the Heptonstall the way they came, enjoying the exhilarating 1000 foot descent back to the Blue Pig, before the torturous 500 feet of ascent to the finish line.

The race is sure to attract top runners from across the region whilst inspiring locals new to fell running, to experience the exhilaration of racing over the magnificent hills of the upper Calder Valley. Beginners will find the route easy to follow, fully flagged, and well marshaled. Seasoned fell runners will enjoy the 1500 feet of climbs and descents over a wide variety of terrain as well as the tough competition provided by the expected gathering of elite competitors.

Rumour has it that Heptonstall based winner of last year’s ladies race, Calder Valley’s Holly Page, will be back from France this week hoping to defend her 2012 title, and in doing so, potentially break the lady’s course record of 55.42 set by Holmfirth Harriers’ Katie Walshaw in 2011. A host of Calder Valley’s fastest men will be aiming to take advantage of the firm ground and fine weather to beat the men’s best ever time of 52.09 achieved by Bingley’s Chris Smale at last year’s race.

Runners can register from 9.00 at the White Lion Pub (£4, minimum age 16), race starts at 11.00; followed by prize giving and German themed refreshments at 12.30 in Weaver’s Square. Full details at www.heptonstallfestivalrace.wordpress.com